For her 12th birthday, Edith Lee-Payne got a gift from her mother that set the course of her life.

Dorothy Lee brought her daughter by bus from Detroit to hear the Rev. Martin Luther King Jr. speak on the steps of the Lincoln Memorial. For her 62nd birthday, she returned for the 50th anniversary of the 1963 march.

This time she was more than a face in the crowd.

Unknown to her for several decades, a photo snapped of her listening to King's "I Have a Dream" speech became an icon of that march and the civil rights movement. She discovered the photo when a cousin saw it printed in a catalog along with other photos of civil rights heroes including King.

"Learning about that picture five years ago was an affirmation for me that I was living my life's purpose," said Lee-Payne. "I have always been one to speak out and intervene when I hear or know of something wrong."

She brought her two granddaughters, Dejai, 14, and Destiny, 16, to the 2013 anniversary March on Washington to pass along the gift her mother gave her.

Her famous face is part of the display on the original march in the National Archives. That display is just yards from the U.S. Constitution. It is also painted on a mural on the side of legendary Ben's Chili Bowl in northwest Washington.

She was besieged by news media from around the world anxious to talk to someone who had been at the march in 1963. She was interviewed by media from Germany, France and Spain, the Al Jazeera network, and many U.S. newspaper and television reporters. Lee-Payne and her granddaughters appeared on the "Today" show with Al Roker. She even met and had her picture taken again by Rowland Scherman, the photographer of the '63 march who made her face a symbol.

Because she understood the significance of that photo to so many people, she was honored to speak to as many people as possible. 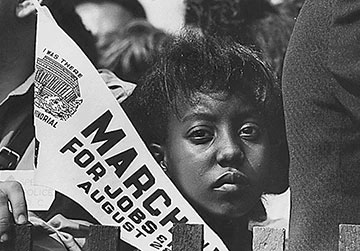 Edith Lee-Payne celebrated her 12th birthday listening to the Rev. Martin Luther King Jr. give his "I Have a Dream" speech in Washington, where she was photographed by Rowland Scherman, on assignment for the U.S. Information Agency. Photo courtesy of the National Archives.

"I felt a commitment, an obligation to talk to people because it wasn't about me, I just happened to be there. A lot of the people who were at the '63 march are no longer here, like my mother. So somebody had to share their thoughts and tell the story of that day."

"In 1963, we were there for a purpose; it was a mission to bring attention to what was going on in the '60s of the South. Wednesday (Aug. 28) could have been for the same thing considering the issues that our country is facing now. But instead it was only a celebration, it was only a commemoration, and I felt it should have been both," she said.

She was moved by President Barack Obama's speech, especially when he mentioned people from 50 years ago who were involved in the movement.

"He mentioned maids, and it made me think of my mother because she was a domestic in 1963. It was like he was speaking about her. I felt really proud to see this African-American president standing where Dr. King stood; that spoke volumes about where we have come while knowing we have a long way to go." Her mother, who went on to be a nurse, died in 1993.

King was a leader who also had many followers, Lee-Payne said. "His message was so Scriptural; it was a message from God. He wasn't self-promoting and because of that, he was respected so well by other religions and people from all walks of life."

The desire to speak up when she sees injustice was instilled by her mother when Lee-Payne was young, she said. She also remembers hearing King speak in Detroit on June 23, 1963, asking people to join him in the March on Washington.

Because of that foundation, she is no stranger to Detroit city government officials. She often speaks out for stronger safety measures, better public transportation and education.

Her first real fight was working to keep busing in the '70s that allowed her sons to attend a better school in a white neighborhood instead of the black school across the street from their house in Maryland.

Lee-Payne said because of her gift from God "to speak truth to power" she is often sought out by young people who have been abused by the police.

She is one of 28 plaintiffs in a suit challenging Michigan's Emergency Manager Law as unconstitutional.

Lee-Payne said one thing that disappointed her about the 2013 event was that many people were unable to be there because of extra security around the president.

"Because it was a ticketed event, it denied access to some people that wanted to be a part of celebration," she said. Everyone needs to be at the table because "the issues we face today are just as bad and in some cases worse because they reverse the strides made 50 years ago. Like the Supreme Court's recent decision on voting rights ... that is a major step backwards."

Lee-Payne said she grew up in an integrated neighborhood but she knew other people in other parts of the country did not live that way.

"People are still not judged by the content of their character," she said. There are still many who do not believe the U.S. Constitution's promise that all people are equal really means all people, she said.

"The promissory note that Dr. King talked about is long overdue."

*Gilbert is a multimedia reporter for the young adult content team at United Methodist Communications, Nashville, Tenn. This feature was originally published September 5, 2013.