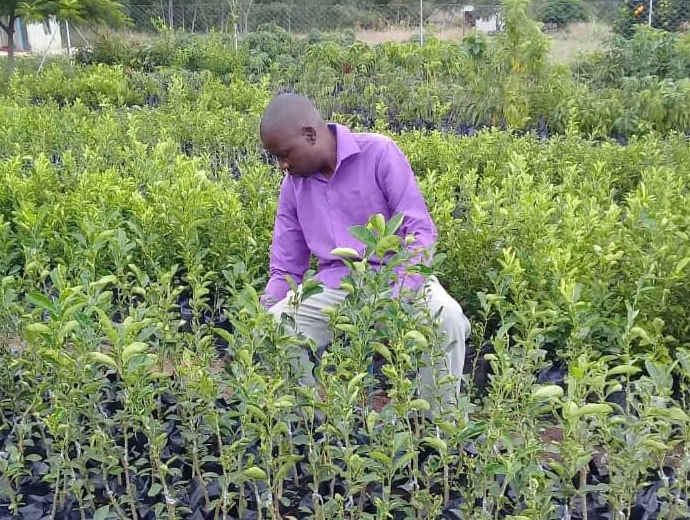 Two Zimbabwe pastors — the Rev. Happymore Chipere and the Rev. Phanuel Razo — are preparing for the sweet life in retirement by growing fruit.

Both were inspired by other United Methodist leaders who are growing citrus trees as a source of funds for their golden years.

And more than 80 United Methodist pastors, people from 30 United Methodist churches and some Anglican priests are among those who have visited Chipere’s farm to consider whether his retirement project would work for them.

Chipere is a fulltime, final-year student pursuing a bachelor’s degree in divinity at Africa University. Razo is getting a master’s in Child Sensitive Social Policy at Women’s University in Africa.

After his appointment to Mukurazhizha United Methodist Church Circuit in the Uzumba Maramba Pfungwe District in Murewa, Chipere met two men who were successfully growing fruit trees in their retirement.

“Both were on retirement and had good houses in Harare, but to my surprise were staying in their rural homes. I really admired their lives in the rural homes. That’s when we decided to develop our rural home together with our retirement package,” Chipere said. 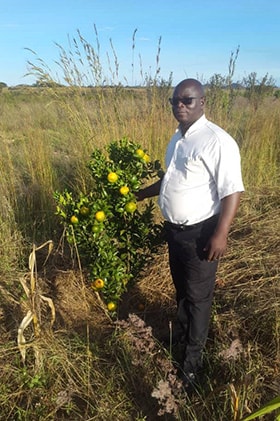 The Rev. Phanuel Razo checks on nartjies (South African tangerines) on his tree farm in the Mashonaland East Province of Zimbabwe. Photo by Chenayi Kumuterera, UMNS.

Chipere said he planted fruit trees in the Mujukuya village of the Murewa district in Mashonaland East Province. He had seen how a clergy couple, the Revs. Forbes Matonga and Nyaradzai Matonga, had made money selling fruit to supermarkets in Harare.

Chipere started a tree nursery in 2005 with 625 citrus plants. He later added 350 mangoes.

“One of our colleagues passed away and I was among those making arrangements for the funeral,” he said. “She was married but unfortunately did not have a personal house anywhere. The church ended up burying her at Old Mutare Mission, but I did not like it. That was a great lesson for me and my friends.”

Chipere said in the 2012-2016 quadrennium, he served as a member of the United Methodist Board of Pensions.

“From the meetings, I learned that the best pension is the investment that you make on your own,” he said.

“We resolved as a family to plant more trees. We entered into several partnerships, as of now, individuals, communities and institutions are coming to learn from us because we are trying to be practical,” he continued.

Chipere said he has eight hectares (nearly 20 acres), with four hectares planted in mangoes and the other four in citrus. He said he has little room for expansion because land is limited.

He has planted nartjies (South African tangerines), oranges, lemons, mangoes and has a plant nursery with 35,000 plants. Chipere anticipates that in 2020, he will harvest 100 tons of mangoes each season and an equal amount of citrus.

Razo also started his farm with eight hectares in the Mashonaland East Province. He initially planted mango trees, plum, nartjies, avocadoes and peach trees. He has since added more than 1,000 peach trees.

The son of the Rev. Happymore Chipere stands under a mango tree on the family’s tree farm in Mujukuya, Zimbabwe. Photo by Chenayi Kumuterera, UMNS.

Razo said he got the idea for the farm from the Matongas and the Revs. Happymore and Eunic Chipere.

The pastors helped him pull together the project, Razo said.

“Of all farming activities, fruit tree farming appeared better suited for us because it does not need much of our physical presence and also trees take many years giving fruits unlike crops that are seasonal. Fruit trees live longer,” said Razo.

Razo said he and his wife borrowed money from the bank to buy mango, plum, nartjies and peach seedlings. He planted 300 avocado trees from fruit seeds collected in the Mbare Market dump site.

Despite being denied an education as a girl, she went on to become a nurse and leader in The United Methodist Church in Zimbabwe in her role as an African bishop’s spouse.
Mission and Ministry

During a virtual meeting of United Methodist Global Ministries, church leaders voted to continue supporting the Bishop Yambasu Agricultural Initiative and other long-term priorities, such as global health, disaster response and migrant workers.
Mission and Ministry