It wasn’t hard to find a United Methodist among the crowd of 30,000 attendees at the 2017 National Scout Jamboree.

The United Methodist Church is the second-largest faith group represented at the event, with 3,500 professed United Methodists at the Boy Scouts of America’s quadrennial celebration, which is being held July 19-28 in Glen Jean, West Virginia. 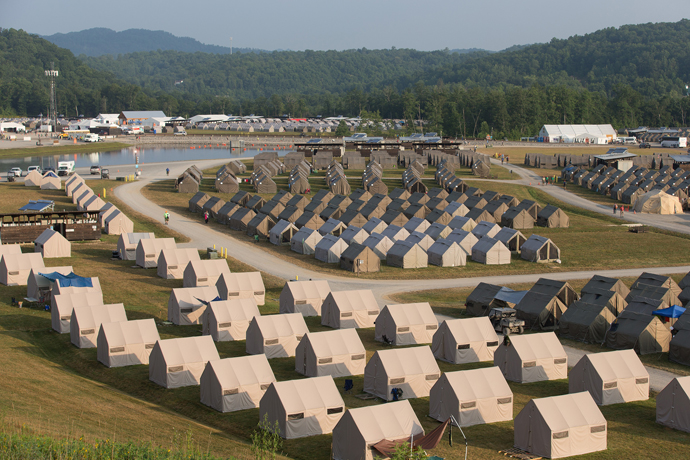 West Virginia Area Bishop Sandra Steiner Ball presided over the United Methodist Holy Communion service on July 23. She also received the Susanna Wesley Award of Excellence, established by United Methodist Men to honor women who have served Jesus Christ and The United Methodist Church in a manner similar to the mother of John Wesley. Larry Coppock, director of Scouting ministries for United Methodist Men, was recognized for his career in service. Coppock is retiring in 2018, so this is his last jamboree as director.

There are also 15 United Methodist chaplains on the 85-member pastoral support staff at the jamboree. 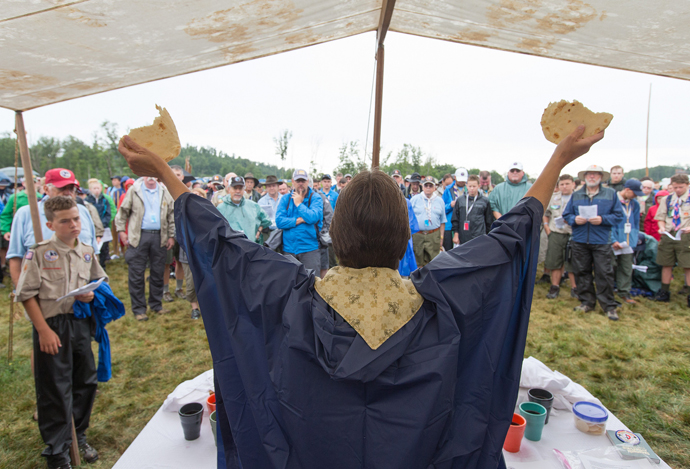 During the 10-day event, chaplains play a big role. It’s a long time for young people to be away from home, and the same goes for the 1,500 volunteers. Even at such a fun event, it can be a trying experience.

“They use us to diffuse tense situations, maybe arguments, maybe a kid or an adult is dealing with something difficult, homesick or something bad going on at home,” said the Rev. Tanya Edwards-Evans, Mississippi Conference. “We’re here so people know our faces and are OK coming to us with a problem.”

Edwards-Evans is one of only two women pastors on the chaplain staff, so she stays busy as she’s often called to counsel girls and women. 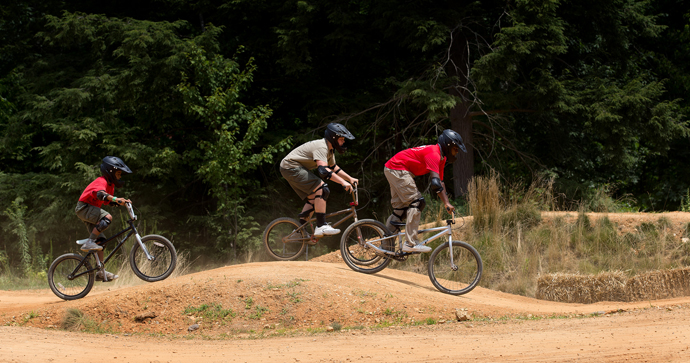 Chaplains say much of their role is listening, and being peacemakers.

“You’re in a tent with three other people, so you get roommate issues. Volunteers may have issues in their marriages, maybe their spouse didn’t want them to come and there’s tension. It’s just giving people an ear,” said the Rev. Creighton Alexander, Oklahoma Conference.

Alexander said because Scouts have different interests, chaplains move to each program area to pray with them and “tell them we’re here for them.” 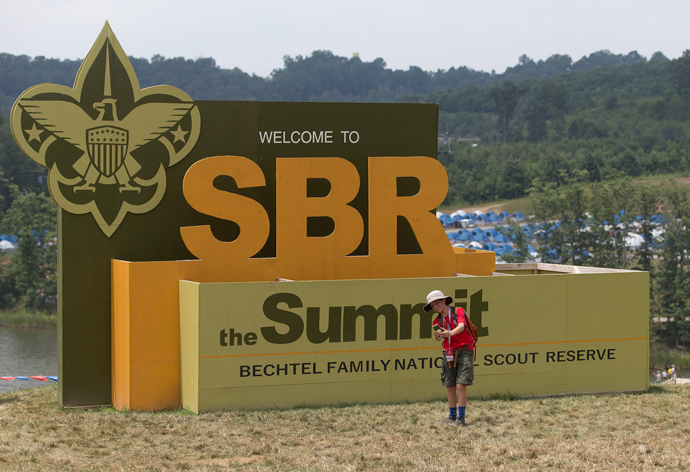 The Rev. Terry Tilton, Minnesota Conference, said he stresses how Scouting teaches appreciation of the world, “especially nature and our place in it.

“That preservation is part of our gratitude for God’s gifts,” he said.

The chaplains are on rotation in the medical unit, to minister both to those who are ill and the staff caring for the injured.

“My whole thing is morale,” Edwards-Evans said. “People are exhausted. I make people smile, and I really try to talk to the volunteers. They pay to be here to do hard work like taking out trash.”

In the “Duty to God and Country” tent, youth and adults lined up at the United Methodist Men’s booth to learn more about the denomination’s dedication to Scouting ministry. Currently, 324,000 youth meet in 7,000 United Methodist churches in the U.S., making it the second-largest faith group involved in Scouting.

Tom McKee, a Scouting Ministry Specialist from Richmond, Virginia, said working at the booth is “an awesome opportunity we have here to reach out to the kids,” adding that Scouting brought him and his family to join a United Methodist church.

Scouting Ministry Specialists, a volunteer position created by United Methodist Men, help local churches establish and expand Scouting ministry opportunities. McKee said he’s talked to several people at the booth who’ve don’t have Scouting at their church, so he takes their information and follows up with them. 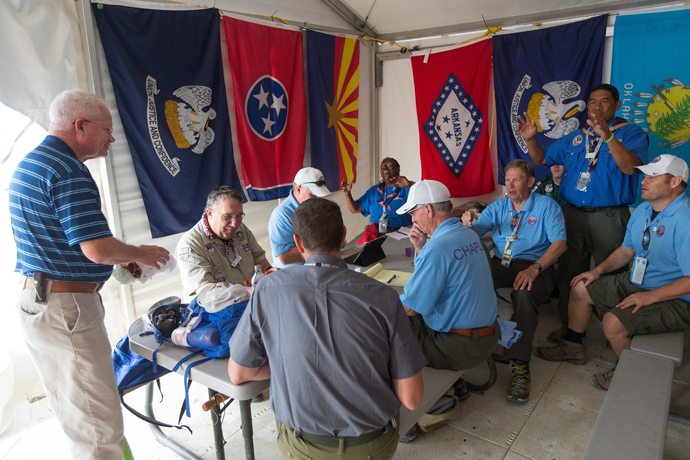 Volunteer chaplains begin their day with a staff meeting at the 2017 National Scout Jamboree at the Summit Bechtel Reserve in Glen Jean, W. Va. Photo by Mike DuBose, UMNS.

“We’ve been active at our booth giving material on our ministries. A lot of people ask how we do what we do and it’s nice to share that good news,” Hanke said.

Tilton said the partnership between Scouting and United Methodist Men is important.

“We’re very blessed to have our United Methodist Men’s ministry say that Scouting is our mission,” Tilton said. “It goes hand in hand with many of the values we teach.” 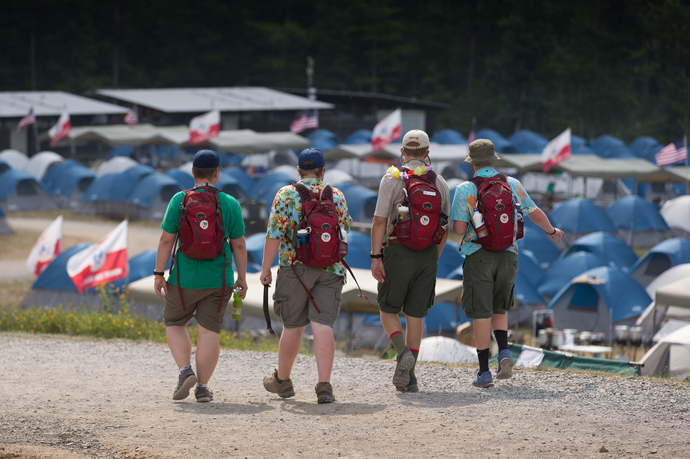 Scouts walk past rows of tents at the 2017 National Scout Jamboree at the Summit Bechtel Reserve in Glen Jean, W.Va. Photo by Mike DuBose, UMNS.

After all the hot days, long nights and sore feet, most still insist they’d do it again.

Tilton, at his fifth jamboree, said, “You look forward to meeting the people, the experiences you have, knowing you’re contributing to something much greater than yourself.”

“There’s too many of our young men and women that are here to not do it,” Alexander said. “We need a presence here.”

Butler is a multimedia editor/producer for United Methodist Communications. Contact him at [email protected] or 615-742-5470. To read more United Methodist news, subscribe to the free Daily or Weekly Digests.