Challenged by a swath of severe summer storms and sweltering temperatures, United Methodists immediately opened their churches as cooling/relief centers and went to work removing debris.

According to accuweather.com, a "super derecho" of violent thunderstorms left a more than 700-mile trail of destruction across the U.S. Midwest and mid-Atlantic on June 29.

The National Oceanic and Atmospheric Administration's Storm Prediction Center received more than 600 damaging wind reports as the derecho took 12 hours to race from northern Indiana to the southern mid-Atlantic coast. A derecho is a line of intense, widespread and fast-moving windstorms.

Spring Heights, the West Virginia Annual (regional) Conference camp, was hard hit, said Laura Allen, the conference's director of communications. With no power and more than 50 trees knocked down, the conference canceled camp this week and began recovery efforts.

"A tree fell across one cottage at the camp," Allen said. "I'm headed back up there, then on to churches back here in the Kanawha Valley. Fortunately, I have a full tank of gas. It's in short supply statewide."

Aldersgate United Methodist Church in Sissonville, W. Va., was finishing vacation Bible school when the storm struck. Now the congregation is providing showers, air-conditioning, Wi-Fi, charging stations and three meals a day. The Red Cross donated 19 cots, so the church became a shelter as well. "At least 400 people have been served by their ministry," Allen added.

"They recently finished a multipurpose building at the church - and put in the showers and kitchen in May," she said. "God provides just enough, just in time. The church is running on generators. At least five other United Methodist churches in the Charleston region are open as cooling centers. Most are also providing food and drinks."

Both people and pets were welcome at St. Mark's United Methodist Church in Charleston, W. Va., WOWK-TV reported. "We've had a family who brought a dog and a pet rabbit," the Rev. Janet Harman told the TV station.

On the conference Facebook page, the Rev. Carol McKay offered an invitation to Lavalette United Methodist Church. "Come in, cool off and power up your cell phones and laptops. We also have Wi-Fi available for surfing the Internet."

In the mid-Atlantic region, at least 2.5 million remained in the dark as the workweek began July 2. The death toll from the severe weather was in the teens.

"I have power at my house in Charleston," Allen said, "but I'm one of the lucky ones. The conference center does as well." 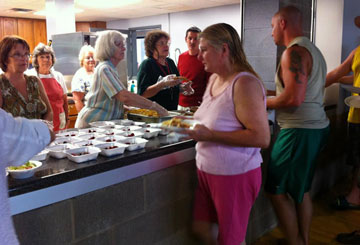 Reporting from the Indiana Conference, the Rev. Dan Gangler, director of communications, said storms with hail and winds up to 91 miles per hour moved through northeastern Indiana on June 29, snapping power lines and hundreds of trees. "The wind took the roof off rural Washington Center United Methodist Church near Columbia City in the Northeast District," he said.

According to the Rev. Bill Rapp, newly appointed pastor of the church, several members, fearing that the walls would collapse, removed pews, the altar, a piano and other furniture from the sanctuary immediately after the storm. The 60-member congregation met at a neighboring church for worship Sunday morning. Insurance adjusters were on the scene during the weekend.

In the East Ohio Conference, communications director Rick Wolcott said a cell of volatile weather moved through the southern portion of the conference on June 29. First United Methodist Church in Cambridge sustained heavy exterior and interior damage. The high winds damaged or destroyed roofs of three other churches - Ninth Street in Cambridge; Somerton; and Bethel in New Concord.

In Harrisburg, Ill., hammered by tornadoes in early March, United Methodist and other local churches and municipal buildings opened their doors as cooling centers as unseasonably hot temperatures scorched the area and forced cancellation of the community's July 4 fireworks display.

According to news reports, emergencies were declared in Maryland, Ohio, Virginia, West Virginia and Washington, on June 30 because of damage from storms that unleashed hurricane-force winds across a 500-mile stretch of the mid-Atlantic region. The wild weather continued July 1 in Illinois and Indiana as heavy rain, hail and high winds toppled trees and power lines.

And relief is nowhere in sight.

The National Weather Service predicted that above-normal temperatures would continue to affect a large portion of the United States from the northern Plains to the Mid-Atlantic, with high temperatures in the 90s to more than 100 degrees for many locations in these areas. Heat advisories and excessive heat warnings are in effect for many affected areas.