Since beginning Black Lives Matters protests in Macon, Georgia, Derian Wilson has been called a communist and a terrorist, told that he was too immature to ever have a wife and family, and asked if he supported Abraham Lincoln.

“That one confused me,” the 21-year-old man said with a chuckle about the reference to the nation’s 16th president. “It was very strange.”

Wilson, a member of Martha Bowman United Methodist Church in Macon, protests three or four times a week outside the Chick-fil-A restaurant where he is employed or at the roundabout near Tattnall Square Park. Sometimes his mom or friends are with him; other times he’s alone. His car sports a black flag that states “Black Lives Matter.”

“I want to see more caring for other people,” Wilson said about his reasons for protesting. “I feel like that’s something that as a society we’re lacking. … Just looking out for your neighbor, making sure people are OK.”

Wilson is one of the United Methodists across the U.S. keeping the momentum of the anti-racism movement going. In addition to individual efforts, many congregations are striving to educate and take action in the aftermath of the killings of George Floyd, Breonna Taylor and other people of color. 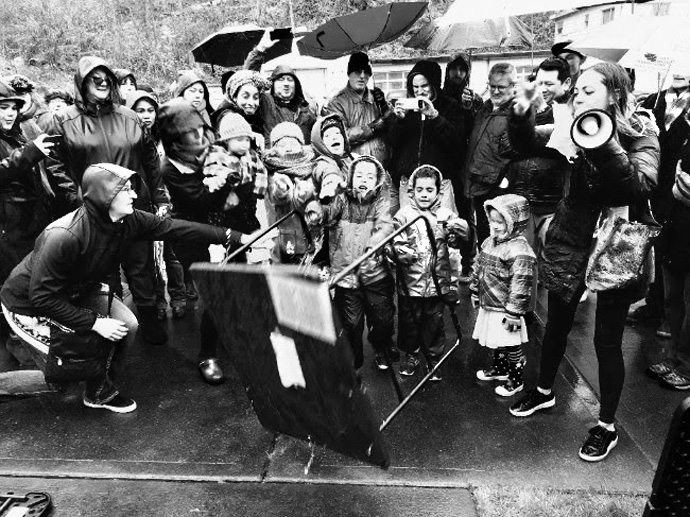 Children of Valley & Mountain, a United Methodist church in Seattle, turn over tables in front of the local headquarters of U.S. Immigration and Customs Enforcement. The protest refers to Jesus Christ turning over the tables in the temple. Photo courtesy of the Rev. John Helmiere.

The Rev. John Helmiere of Valley & Mountain, a United Methodist church in Seattle, said race was a priority there before the current crisis.

“We’ve been very active in Black Lives Matter activism, marches, demonstrations and stuff like that,” he said.

“I always try to be very intentional about who is represented up front in our liturgies and services, keeping a real close eye on presentation and seeing diversity there,” Helmiere said. “I’m pastor but I’m a white guy, so I probably only preach once a month. We just make room for a lot of other voices in our community.” 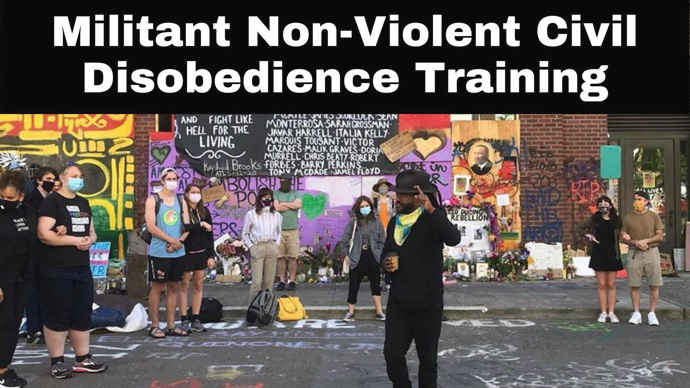 Activist the Rev. Osagyefo Uhuru Sekou has been brought on staff as theologian-in-residence. He leads liberation theology book groups, a “Revolutionary Bible Study” and training in nonviolent civil disobedience.

“He has trained over 10,000 people in nonviolent disobedience,” Helmiere said. “He comes out of the school of John Lewis and (the Rev.) James Lawson, the great Methodist clergy person who is one of his mentors.”

Plans call for Sekou to launch a training center to advance the theory and practice of active nonviolence. The center would be housed at Valley & Mountain.

At St. Luke’s United Methodist Church in Indianapolis, the emphasis so far has been on education, said the Rev. Rob Fuquay.

“We did a seven-week series on racial justice in August and the first two Sundays in September,” Fuquay said. “We ended it with a sermon by (activist) Jim Wallis.”

“The next step … is training in what it means to be anti-racist,” Fuquay said. “We have now had a number of learning and training opportunities with (the Rev.) Michelle Ledder through the United Methodist Commission on Religion and Race.” 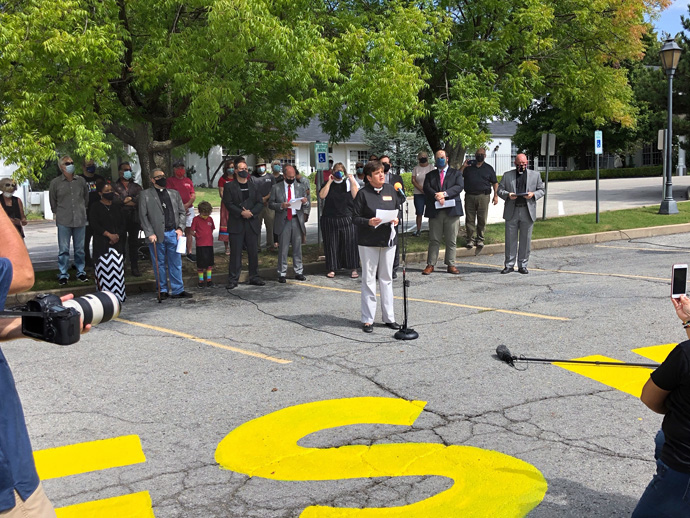 The Rev. Kathy Brown, pastor of St. Paul's United Methodist Church in Tulsa, Okla., speaks at the church, which has painted “Black Lives Matter” on its parking lot. Photo courtesy of the Rev. Twila Gibbens.

At Clair Memorial United Methodist Church in Jersey City, New Jersey, which is predominately Black, the Rev. Dawrell Rich is making the education of people in the community a priority.

“I’ve been doing a lot teaching and making plain what institutional racism is (and) what systemic racism is, because in my conversations I started to understand that a lot of people don’t know the meaning of those terms,” Rich said. “I think that in this climate, those of us who maintain that the Gospel of Jesus Christ is about liberation and social justice, we have to engage that work. … I recognize that a lot of pastors are just not knowledgeable about that stuff, so they have to do their due diligence to learn it.”

At St. Paul's United Methodist Church in Tulsa, Oklahoma, congregants are confronting the legacy of the 1921 Tulsa Race Massacre, where up to 300 people were killed in the aftermath of an African American man being accused of attacking a white woman. Most of the victims were African Americans, and businesses, homes and churches in the Greenwood area, or “Black Wall Street,” were destroyed.

The United Methodist Commission on Race and Religion offers several classes, including:

Anti-Racism 101: Required Skills for White People Who Want to be Allies.

You Are Here: First Steps for White Christians on Race and Racism.

Implicit Bias: What We Don't Think We Think, a self-guided course tailored for General Conference delegates.

Last year the church started a class called “Holy Conversations on Race” in conjunction with the Rev. Thomas Hoffmann of Hope United Methodist Church in Tulsa. Hoffmann wrote a curriculum about the massacre, including the involvement of white churches in the carnage.

To further reconciliation, St. Paul’s has begun paying reparations to organizations that serve the Black community in Tulsa.

“Reconciliation isn’t just forgive and forget,” said the Rev. Twila Gibbens, a retired United Methodist pastor leading the racial reconciliation effort at St. Paul’s, where she was once the pastor.

“We have to acknowledge our part in the race massacre and that it continues to affect families from generation to generation.”

The idea of paying reparations came up at the end of a 12-week racism study group, and $600 was raised for reparations at a subsequent dinner. Then the church designated the second Sunday of each month as Reparations Sunday and took collections for the fund.

The first reparation payments of about $700 each were awarded after a vetting process to Vernon African Methodist Episcopal Church in Tulsa to help with food distribution; the Tulsa Dream Center for their food ministry; and Morton Comprehensive Health Services, which provides COVID-19 testing. St. Paul’s plans to continue distributing reparation funds every six months.

The pastors said some church members are uncomfortable about the focus on racial issues.

“There are some people who say, ‘I’ve been taught and have taught my children not to see color, to judge everybody by the content of their character. And now you’re telling me that I’m a racist,’” Fuquay said.

Sometimes Fuquay feels he has to tell people who hold that opinion that “maybe this church isn’t for them.” 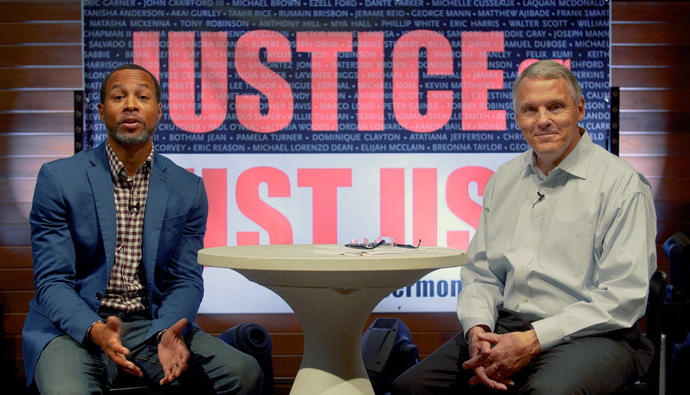 But small triumphs balance out setbacks.

Rich, pastor of the Jersey City church, is hopeful that the current focus on racial issues does not fade away before much more good can come from it.

“Those of us who are Black preachers, we don’t have the luxury of just stepping in to talk social justice when something happens,” Rich said.

“This is not a sprint. This is a marathon.” 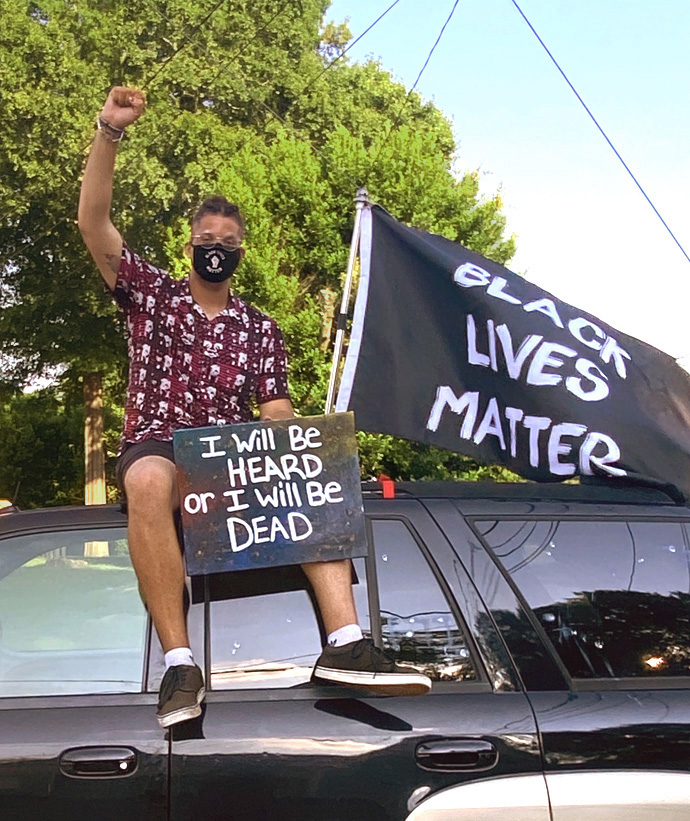 Derian Wilson who protests racism regularly in Macon, Ga., sits atop an SUV during a demonstration. Photo courtesy of Derian Wilson.