No speaker claimed the church has the power of Moses to turn back the Red Sea of HIV and AIDS in the world. But scientists, activists, and political leaders at the 19th International AIDS Conference repeatedly stressed the crucial role faith communities must play to reach the vision of an "AIDS-free generation." The conference took place July 22-27 in Washington.

New scientific breakthroughs that reduce the possibilities of HIV being transmitted and lowering the death rate of AIDS has prompted unprecedented hope that the world can achieve the UNAIDS goal of "zero new HIV infections, zero new AIDS deaths, and zero discrimination." The partnership of faith communities with public health officials and political leaders is essential for HIV education, prevention, care, treatment and stigma reduction.

Ambassador Eric Goosby, the U.S. Global AIDS coordinator, at an interfaith conference before the Washington gathering, said the "government needs the faith community to reach the people most affected by AIDS, such as the urban poor and people in rural areas."

Unlike 24 years ago, when the conference was last in the United States, faith groups this time were integral to the deliberations that attracted some 24,000 participants from more than 195 countries.

Lifting up the conference theme of "Turning the Tide Together," the U.S. surgeon general, Dr. Regina M. Benjamin, shared the story of losing her brother to an AIDS-related illness and called on the faith community to help the government in "turning the tide against AIDS."

Recognizing the vital role of faith communities in combatting HIV and AIDS, President Obama invited leaders of various faiths to a special forum at the White House. Joshua Dubois of the White House Office of Faith-based and Neighborhood Partnerships noted that "the path to an AIDS-free generation is paved with partnerships."

Obama, in a video presentation to a religious summit sponsored by Rick and Kay Warren of Saddleback Church, World Vision, Catholic Relief Services and Food for the Hungry, stressed how crucial it was for faith leaders everywhere to demonstrate love and compassion.

Calling for partnership with faith leaders, Obama cited St. Paul that "we, who are many, are one body in Christ, and individually we are members one of another" (Romans 12:5).

Former President George W. Bush also spoke by video, declaring the AIDS emergency both a moral imperative and a matter of national security. He thanked the faith community for its work, and cited Jesus saying that "To whom much has been given, much will be required" (Luke 12:48). 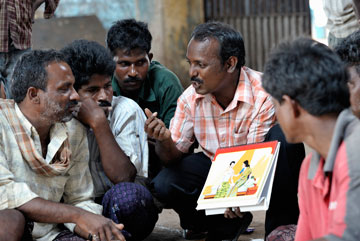 Simon Charles, an educator with the Madras Christian Council of Social Service, meets with fishermen at the dock in Chennai, India, in March 2010 to explain HIV and AIDS.

Pastor Rick Warren of Saddleback Church noted that the church with its congregations and health clinics spread out in villages across the continent of Africa has the potential of "turning the tide" in the battle to end AIDS.

"We may not agree on a lot as Christians," said Warren, "but we can agree to work together to stop AIDS."

Dr. Thomas Frieden, director of the Centers for Disease Control and Prevention, pointed out that "all faiths start with the idea that life is sacred and we are challenged to respect and extend life."

Frieden noted that "health care in Africa is primarily a function of religious organizations. Specifically, 40 percent of the care in Rwanda and Tanzania, and approximately 70 percent in Kenya, come from faith-based organizations."

The Rev. Christo Greyling of World Vision emphasized the healing ministry of Jesus and that "the church has no exit strategy when it comes to the response to HIV and AIDS."

Secretary of State Hillary Clinton told the attendees that she was "here today to make it absolutely clear the U.S. is committed and will remain committed to achieving an AIDS-free generation."

Former First Lady Laura Bush talked about seeing people "at death's door and now living a vibrant life," thanks to the Lazarus effect of antiretroviral drugs. Concerned that "women are living with HIV, but dying of cervical cancer," she and her husband recently launched in Zambia a "Pink Ribbon/Red Ribbon" campaign to expand the availability of screening and treatment.

Four steps the church must take

Signs of hope and challenge

There are scientific signs of hope on the horizon. Those who monitor statistically - including UNAIDS and the Centers for Disease Control and Prevention - report this picture:

Speaker after speaker emphasized that, besides providing treatment and care, churches and other faith communities have a unique role to play in creating an AIDS-free world.

First, churches must demonstrate a commitment to overcome stigma. Because of blame and shame, people fail to get tested, counseled, and treated until it is too late for medicine to work. If the UNAIDS goal of "getting to zero," is to be realized, church groups need to stop fueling stigma and discrimination and become anti-stigma agents.

Second, churches need to engage in dialogue with people infected by HIV and AIDS, including key populations affected by the pandemic. A stigma survey in Kenya revealed 38 percent of HIV-positive people had been physically harassed and 31 percent had been excluded from their houses of worship. Religious leaders exercise positions of power in their communities and countries, but often have not exercised their influence to be shepherds protecting their flocks nor helped to stem the spread of the disease.

The Ecumenical Advocacy Alliance earlier this summer in Malawi engaged religious leaders and people living with HIV in a day of dialogue. The Rev. Philip Kuruvilla of the Syrian Orthodox Church of India reports that Asian religious leaders are planning to meet with people from the lesbian, gay, bisexual, and transgendered (LGBT) communities. Representatives of the Center for the Church and Global AIDS met recently in Nairobi, Kenya, with pastors and LGBT activists. Rebecca Yount, director of the United Methodist 20/20 campaign, described that session as "a time of listening and learning as we heard courageous Kenyans tell of the violence and discriminatory health care they receive because of their sexual orientation."

Third, churches are called to promote "safer sex" and behavioral change. Neither cure nor vaccine are imminent, so "safer sex" and behavioral change remain key elements in "turning the tide." Condoms remain the least expensive and most effective prevention method available, yet often faith groups are hesitant about making them available. Robert Ngaiyaye of the Malwai Interfaith AIDS Association noted some progress after their dialogue in Lusaka. "Malawian religious leaders aren't handing out condoms from the pulpit," said Ngaiyaye, but "they are talking about them when they used to never even speak the word."

Fourth, churches can become Good Samaritans who offer companionship, care and cash. Often recitation of Jesus' parable of the helpful Samaritan notes his extraordinary courage and compassion but fails to underscore that he generously gave the innkeeper "two denarii" - the equivalent of the usual day's wage for a laborer - and declared "Take care of him; and when I come back, I will repay you whatever more you spend" (Luke 10:35).

If the church is to fulfill its mission and ministry in partnership with the global community seeking to "turn the tide" of the AIDS pandemic, every Christian and congregation will be expected to make a significant personal and financial contribution.

Stressing the importance of religious groups working together with governments and non-governmental organizations, the Rev. Canon Gideon Byamugisha, an HIV-positive Anglican priest from Uganda, declared that, "When we do what we can, God will do what we can't. With great partnerships, we can do great things" - like helping to turn the tide, parting the Red Sea of HIV and AIDS, and leading people from the pharaohs of poverty and disease toward an AIDS-free generation.