The mood was somber and reflective as the community of Chardon, Ohio, 30 miles east of Cleveland, gathered for prayer vigils after shootings at the town high school that killed three students and wounded two others.

As the school day began Feb. 27, a student, identified by the Cleveland Plain Dealer as T.J. Lane, opened fire in the Chardon High School cafeteria. As teens and teachers fled and the school went into full lockdown, Lane was apprehended. Three students, Daniel Parmertor, Russell King Jr. and Demetrius Hewlin, later died from their injuries.

As twilight heralded the end of a long, difficult day, the community turned to prayer.

"Three United Methodist churches opened their doors to the community, so they had a place to gather and grieve together," said Rick Wolcott Jr., director of communications for the East Ohio Annual (regional) Conference.

More than 200 people assembled at Chardon United Methodist Church, just down the street from the school. They sang and prayed. "A grief counselor offered words of encouragement, and a couple of people with microphones worked their way around the sanctuary" so participants could share memories, thoughts and concerns, Wolcott said.

As people told their stories, "the whole thing was a sermon," he added.

After the service, students walked to Chardon Square in the center of the town of 5,000 for their own candlelight vigil. Ribbons of red and black - the colors of the Chardon Hilltoppers - appeared on lapels and trees to show support for the shooting victims. 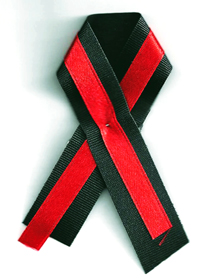 Ribbons of red and black - the school colors - showed support for students at Chardon High School in Ohio and their families. A web-only photo by Richard K. Wolcott, Jr.

'This could happen anywhere'

At a press conference Feb. 28, Geauga County Sheriff Dan McClelland thanked the community for its support and the news media for its patience. "Chardon, Geauga County and northeast Ohio are rallying like never before," he said.

Chardon superintendent of schools Joe Bergant said schools would reopen Feb. 29 for teachers and staff to visit with counselors, March 1 for students and parents to see counselors and March 2 for classes.

"We are not just any place," Bergant commented. "Chardon is every place. This could happen anywhere.

"Talk and hug your children today. Don't text them. Don't Facebook them. Talk to them."

Wolcott said he found most poignant "the number of people who asked for prayers for the shooter and his family because they are grieving in a way we cannot possibly understand."

He stressed the important role of the church in times of tragedy.

"It's always important for the church to be the church," he said. "There is no better time to show the healing power of God."