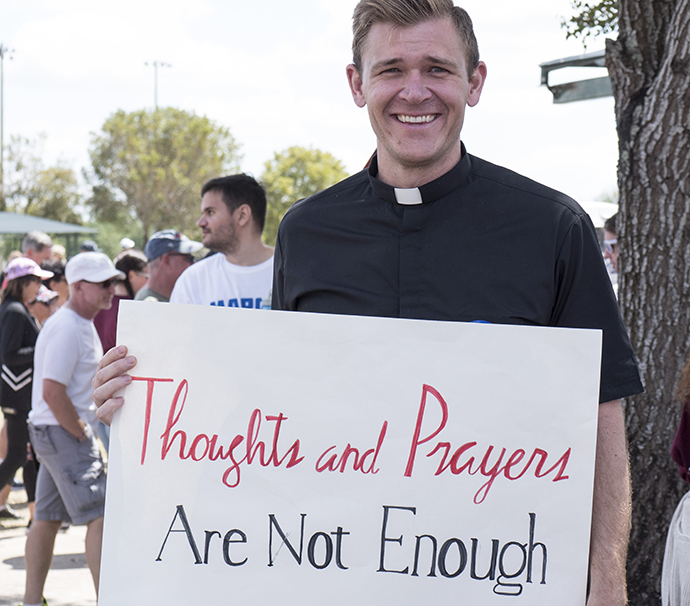 The Rev. Josh Beaty, pastor of discipleship at Christ United Methodist Church, Fort Lauderdale, Fla., was among many United Methodists who participated in the March for Our Lives rally held March 24 in Parkland, Fla. As mass shootings increase in the U.S., churches are considering how far they are willing to go to ensure security. Photo by Kathy L. Gilbert, UMNS.

One Sunday morning during worship at Antioch United Methodist Church, someone pushed the “panic button” in the church office. Police rushed to the sanctuary.

“I saw the police come in and wondered what in the world’s going on,” said the Rev. James Cole, pastor at the Nashville, Tennessee, church. “I went out and asked them what was happening, and they were all business.”

It turned out a child had wandered off, found the button and pushed it. However, with deadly shooting incidents at another area church and a nearby Waffle House in the recent past, Cole said that the professionalism and speed of the police response was reassuring.

“They were energized (because of recent shootings),” he said. “I appreciate that, honestly. So I think the police are doing their jobs real well.”

Cole is among pastors and church officials thinking about church security precautions in light of the acceleration of mass shootings — some of them at churches. Some think that measures like employing armed guards threaten the very atmosphere churches want to provide — an open place for worship, fellowship and prayer.

Can security be achieved without disrupting the purpose of church?

“Definitely,” said Patrick Fiel of PVF Security Consulting LLC and a security expert with 35 years of experience, including safety consultations with 3,000 churches. “It doesn’t have to be a prison-like concept. Just don’t allow an intruder to walk right in.”

For a fee usually ranging from $500 to $3,000 — the more time he devotes to a project, the more it costs — Fiel will evaluate churches and recommend security improvements.

Fiel said most churches are “soft targets” — easy to attack.

The United Methodist Church’s Book of Resolutions includes a lengthy statement on gun violence, which calls for background checks and waiting periods for gun purchases. It also calls on the church to advocate for the eventual reduction of the availability of guns.

Hiring armed guards or relying on church members with guns is not always necessary, Fiel said.

“If a church is very isolated and you won’t get a response from law enforcement for 20 or 30 minutes, you might have to consider arming some of your staff members,” Fiel said.

Some church leaders oppose aggressive security measures —especially use of firearms — saying it would interfere with their mission.

The Rev. Larry Homitsky is pastor of Calvary United Methodist Church in Pittsburgh, the city where the Tree of Life or L’Simcha synagogue was attacked on Oct. 27. Eleven people died and seven were injured in the attack.

Despite the nearby attack, Homitsky said he has no plans to increase security at Calvary.

“We’re not in a war zone, and I think this particular concern or battle … needs to be resolved by peaceful and different measures rather than increasing armaments,” Homitsky said.

Calvary greeters position themselves at the multiple entryways before Sunday services, but they are there primarily to welcome people, not for security.

“We are an open and welcoming congregation and that is our purpose and our call,” Homitsky said.

The United Methodist Book of Resolutions in “Our Call to End Gun Violence” spells out what the church believes about gun violence and has a list of recommendations, including displaying signs that prohibit carrying guns on church property.

The Rev. David Wesley Brown, a retired pastor associated with First United Methodist Church of Germantown in Philadelphia, said a better response to mass shootings is to campaign for commonsense gun law reform.

“If our sense of security requires us to have guns, it reduces the likelihood of seeking other, non-violent solutions to conflict,” Brown said.

Brown is also the chair of the Philadelphia committee of Heeding God’s Call to End Gun Violence.

“The best way for a church to increase its security is to work in the neighborhood to reduce gun violence,” Brown said. “One problem with the ‘good guys with guns’ solution is that it only creates an arms race. Trying to harden soft targets only hardens the hearts of everyone involved.”

Both Cole and the Rev. Dean DeFino of Trinity United Methodist Church in Salisbury, Maryland, acknowledge that there is a good chance that some of their flock carry guns to Sunday service. They neither encourage it nor ban guns.

“There’s no ban on firearms, and I guess if a person has a permit for a concealed weapon that wouldn’t be a problem as far as them coming,” DeFino said.

Maryland endured fatal church shootings this year and 2012. A few months ago, the local sheriff did a presentation for Trinity staff and ushers.

“We haven’t taken any steps like arming anyone as far as our sanctuary is concerned,” DeFino said. “We did have training on how to spot somebody who is suspicious.”

Ushers look for people who are not familiar churchgoers and are “shiftily looking around, not having a worshipful attitude and kind of casing the place,” DeFino said.

“I hate to say it, but it’s like profiling,” DeFino said.

The sheriff also told church members to be aware of members of a family going through any sort of separation, because that is when some people turn violent.

Technology is the first line of defense at First United Methodist Church in Grand Rapids, Michigan, said Emil Jensen, business director at the church. The 100-year-old facility is equipped with security cameras and a key card system to gain entrance. Like the churches in Tennessee and Maryland, church officials believe some church members bring guns to services, but the church has not expressed a policy on guns.

“Really, we shouldn’t have any guns in the church,” said Jensen, who noted that a police station is four blocks away. “But we’re not sure what good it would do if we started saying ‘no guns’ at this point.’

The Grand Rapids church is bordered by a college neighborhood, the city’s downtown area and an area with many homeless and low-income residents.

Jensen thinks church programs that cater to the needs of the poorer residents in the area are one of First United Methodist Church’s best defenses against crime.

“We engage in ministries during the week and we know many of them,” he said. “We’re comfortable knowing that they’re invited to the church and some do come to church on Sunday.”

Relationships are also an important aspect of security at the First United Methodist Church of Pittsburgh. Many of that church congregation live in the Squirrel Hill neighborhood, where Tree of Life Congregation is located.

Some members of the United Methodist congregation heard the shots fired at the synagogue and saw SWAT teams running across their yards to Tree of Life, the Rev. Tracy Cox said.

“Our building maintenance manager has built tremendous relationships with some of the homeless around the building,” Cox said. “Other staff follow his lead and keep the building secure and welcoming.”

Cole thinks it may be time to preach on the subject of church security to the whole congregation, instead of keeping it the purview of a select number of church leaders.

“We need to do this as a congregation one Sunday morning,” he said. “We should just say, ‘Look, in the world we live in, we’ve got to think about this stuff.’

“These discussions don’t need to be particularly disruptive to worship or the sacredness of this space. They are just commonsense things that we have to be aware of in this day and age.”