A United Methodist church in Tulsa, Oklahoma paid a tribute to Prince yesterday by posting a portion of his lyrics on its outdoor message board. 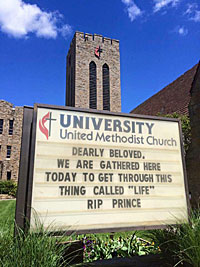 A photograph of the sign, along with the message "Punch a Higher Floor, brother," another reference to his lyrics, was then posted on the church's Facebook page.

The Rev. Nathan Mattox, pastor of University United Methodist Church in Tulsa, said posting the message was therapeutic, helping him deal with the loss of a figure from his youth.

Prince has "always been one of my favorites," he said in an interview with the Tulsa World. "I used to be a DJ in college, and I don't think I ever let a party go by without dropping 'Kiss' or something, at least."

In a related column by Kimberly Winston on the Religion News Service website, she wrote that while Prince's life and career were often shrouded in mystery, he was clearly a man of faith.

He grew up a Seventh-day Adventist and became a Jehovah's Witness as an adult, even proselytizing door-to-door for the Witnesses in his hometown of Minneapolis.

In the 2013 book I Would Die 4 U: Why Prince Became an Icon by Touré, Prince's guitarist Dez Dickerson described Prince as a “guy who really is thoughtful and introspective and holds religious considerations close to his heart and ponders those questions sincerely and genuinely and deeply.”

Los Angeles Times - Where music meets religion: What an L.A. Times writer learned spending a night with Prince in 2009