Ten years ago, the ministry of Oak Forest United Methodist Church appeared to be flatlining.

Its neighborhood was declining, and so was its membership. A core of mostly elderly worshippers was all that kept the lights on.

But now, by improving the physical and spiritual health of its struggling neighbors, the urban congregation is pulsing with new life.

Linda J. Pringle, the volunteer coordinator of the food pantry, said that since adding these ministries, the congregation has transformed from “a pew-warmer church” to one where disciples try to live out Jesus’ words in Matthew 25.

“You are to help the poor, the hungry, the sick, the lame, and I feel that’s what we’re doing,” the 73-year-old said. “And I pray we can continue.”

As the church reaches outside its walls during the week, a new vitality is taking hold inside its sanctuary each Sunday. Where once mainly grandparents worshipped, young adults now also join in prayer and little ones giggle through children’s sermons.

A few visitors have dropped by on Sunday after being helped by one of the ministries, but the people who keep coming back tend to be those eager to volunteer to help others.

Church members are quick to point out that Oak Forest’s outreach ministries would not be possible without the generosity of parishioners, partnerships with other churches and businesses, and the support of the wider United Methodist connection. That support includes grants from the United Methodist Committee on Relief.

Still, the experience of Oak Forest United Methodist Church can be a model for other shrinking congregations in changing neighborhoods, said the Rev. Russ Breshears, the church’s pastor.

“What we’ve done is not miraculous,” he said. “God has helped us. But we’ve done some very specific things and made some very useful partnerships. And it’s worked for us. And we believe and have the faith that God can bless many other congregations that are in declining neighborhoods (and help them) transition to have a vibrant ministry.” 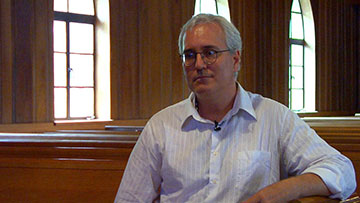 The church is small, with a regular worship attendance of about 70 — but attendance figures tell only part of the story.

In the past year, the Shepherd’s Hope medical clinic served 1,700 people. The vision clinic provided people with 400 new pairs of eyeglasses and arranged four cataract surgeries. The dental clinic removed painful teeth from about 500 people. The Shepherd’s Hope gynecology clinic detected cancer in its early stages and arranged free treatment for two women at local hospitals.

The clinics usually request patients pay $5 per visit, but no one is turned away because of inability to pay.

Physicians, dentists, eye doctors, nurses, pharmacists and technicians from a variety of religious backgrounds volunteer at the clinics. But they agree they would not be there without the support and, in many cases, the recruitment of Oak Forest members and the church’s energetic pastor.

The church’s food pantry, which feeds about 25 families each week, is entirely operated by church volunteers.

More than 90 percent of Oak Forest’s parishioners volunteer each week in some way to support the church’s ministries, and many of the church’s longtime older members are leading the charge.

They include Harry and Sue Dinsmore, both in their 80s, who volunteer every week at the church’s food pantry.

“I started out during the early Depression, and I know what it’s like not to have a lot of things that we take for granted today,” Harry Dinsmore said. “A little bit of help now and then makes a big difference.”

“It’s not a biblical concept,” he said. “We recycle people. So, when you are too old to run the youth group … come and work in the food pantry. And when you’re too old to do anything but pray, pray for us. Encourage us. Encourage other people.” 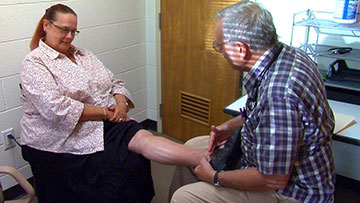 A patient is treated at the Shepherd's Hope medical clinic.

The story of the 70-year-old congregation is much like that of many congregations across the United States.

In the first two decades after World War II, the church grew rapidly as veterans and their young families moved into the new subdivision and filled its pews each Sunday. But as the city grew, many middle-class families moved to newer and larger houses further west from downtown, and many churches moved west too.

The Oak Forest congregation stayed put even as more financially strapped people moved in. Many houses became rental properties, and some were abandoned altogether. The flashing lights of police cars became a familiar sight, and the number of children dwindled.

That might have been the beginning of the end, but parishioners credit two changes with giving the church a new sense of purpose.

First, in 2005, members of Fellowship Bible Church — a nondenominational megachurch in prosperous west Little Rock — approached Oak Forest about opening a health clinic in an old house that the smaller church owned and was using for storage.

Shortly after, Breshears was appointed to the church. His first day coincided with clearing out the old house. Church members helped with renovations and built a wheelchair ramp to make it accessible. Lola Fish, an Oak Forest member and nurse, was among the first volunteers at Shepherd’s Hope and served on its board.

“This is really what John Wesley said,” she said. “You need to go out among the people. You need to help whoever is out there.”

Fellowship Bible and Oak Forest members still jointly govern Shepherd’s Hope. The clinic has outgrown the house and now also uses space in a Baptist church down the street.

Breshears soon recognized the church could serve additional needs in the neighborhood. Church members credit their pastor with inspiring them to do more, starting with adding a food pantry.

The Rev. Russ Breshears said the church always welcomes donations and new partners in its ministry. Even with the new Affordable Care Act’s provisions taking effect, he expects the needs for the clinics to continue since many of the people the clinics serve are recent immigrants.

When the owner of the house next to the clinic died, Breshears urged the congregation to buy the property and turn it into a dental clinic. Then came the vision clinic, which uses the church’s basement.

Gloria Minor, a member of Oak Forest for 56 years, said she initially had her doubts the church could afford the $42,000 purchase for the dental clinic. But the church paid off the house within a year.

She said she now has faith the church can pay off its most recent purchase, a $38,000 house across the street that holds the church’s newest ministry — the Barnabas House counseling center.

In any case, Minor is grateful the church now engages in so much mission work.

“I think it’s lifted our spirits,” said the 85-year-old, who handles the vision clinic’s paperwork.

“When you get on the side of what God wants to do in the community and in the world, there somehow always seems to be enough. That is the message of Oak Forest,” said the Rev. Dede Roberts, the congregation’s district superintendent.

She said she has no doubt Oak Forest fits the definition of a vital congregation, and noted that the church is slowly growing.

One of the church’s new members is 27-year-old Jonathan Cupples. He visited the church on Easter after moving into the neighborhood. After a couple of visits, Breshears noticed the medical decal on Cupples’ truck and persuaded the emergency medical technician his skills were needed.

Cupples said helping at the medical clinic has strengthened his Christian faith.

“People come in, and the only thing they have sometimes is their faith, and some have even lost their faith,” he said. “And to see them (and) see God through some of the work that we do here is amazing.”

Just about every month, Cupples said, he sees someone new at Sunday worship — sometimes a family, sometimes a young adult.

“God’s not finished with us as long as we’ve got a breath,” Breshears said. “And so we try to believe like Wesley: The best is yet to come. … And this is what we want for our denomination.”