Editor's Note: As The United Methodist Church focuses on vital congregations and responding to membership trends around the globe, United Methodist News Service is taking a close look at church vitality. This is the first in an ongoing series of reports.

To determine whether a congregation was doing well, church leaders used to count just two things — bottoms in the pews and dollars in the plate.

Now many United Methodist leaders believe those metrics are not good enough. People and money do not capture whether a church is truly doing the vital work of making Christian disciples, said the Rev. Amy Valdez Barker.

So, what qualifies as a vital congregation?

Valdez Barker spends a lot of time thinking about that question. She is the executive secretary of the Connectional Table, which coordinates the denomination's mission, ministry and resources. She also previously served as the project manager for the Vital Congregations initiative established by the United Methodist Council of Bishops and Connectional Table.

She is not alone. Pastors, bishops and lay people across The United Methodist Church are wrestling with defining vitality — even as the term "vital" increasingly becomes a buzzword in the denomination's efforts to reverse decades of declining U.S. membership.

"It is something we've got to keep on exploring," Valdez Barker said.

The challenge comes in figuring out how to measure disciple-making. Denominational leaders have varied ideas of how to go about that. 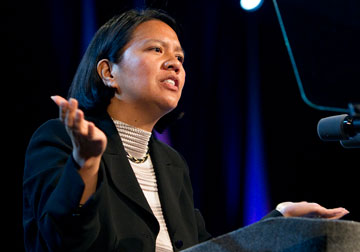 One thing Valdez Barker and other denominational leaders do agree on: The United Methodist Church has plenty of stories of vital churches engaged in dynamic ministry, and those churches come in a variety of sizes and cultural contexts.

Grace Church — a multi-campus United Methodist congregation in Southwest Florida — routinely welcomes more than 2,500 worshippers each week. The church offers more than 100 small groups, operates its own Grace Community Center and has gained a national reputation for providing one of the largest recovery ministries in the United States.

It's no surprise that denominational leaders regard Grace Church as a vital congregation. Grace's lead pastor, the Rev. Jorge Acevedo, even wrote a book on the subject: "Vital: Churches Changing Communities and the World."

The congregation, like Grace Church, offers weekly Bible studies. Since December 2011, it also has operated the Yellowstone United Methodist Free Store "giveaway" ministry at least twice a month. As of the end of 2012, it had a weekly worship attendance of 98 people.

"You can have a big church that's wimpy, and a small church that's strong," Acevedo told United Methodist News Service. "The key is whether the church is moving in the right direction."

The Rev. Jeremy Scott, Evangelical's pastor, said the church has seen its worship attendance grow this year. Nearly all that growth has been people under retirement age and families with young kids.

What both Grace and Evangelical share in common is that they offer opportunities for spiritual formation and social outreach to their communities. They also share a clear sense of vision, of what they can do to help build God's Kingdom.

"Vitality is an attitude in my book," Scott said, "an attitude that is about building the future even if we won't necessarily be there to see the fruit." 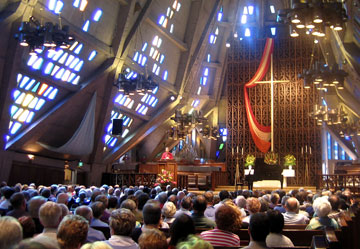 A worship service at First United Methodist Church of Palo Alto, Calif., includes hymns sung in both Spanish and English.
A UMNS photo by Deborah White.

The study used six "indicators of vitality" identified by the steering team to measure United Methodist congregations in the United States. They were:

Towers Watson reviewed data for 32,228 U.S. United Methodist congregations — that is, 95% of U.S. churches at the time — for a three- to- five-year period. The information came from the General Council on Finance and Administration, the denomination's finance agency.

The firm then divided the churches into three groups: "high vital," "medium vital" and "low vital."

Based on the data churches had submitted to the finance agency, Towers Watson categorized 49% of U.S. United Methodist churches, 15,546, as medium vital and 15 percent, 4,961, as high vital.

Still with only a few additions, the study's vitality indicators were based largely on the old paradigm of pew and offering plate - the things the church now measures.

"While they tell us some things, in my opinion, (the indicators) aren't the whole picture of the health and vitality of a congregation," said Kim Shockley, team leader of the recently completed Toward Vitality Research Project. Her study, sponsored by four United Methodist agencies, examined congregations that had undergone change recently and were reaping the benefits of that change.

"The vital congregations we interviewed were wanting to measure the impact they were making within the community — how many people were we feeding, clothing, etc.," Shockley said.

The churches also wanted to measure how many people they engaged in study and fellowship groups.

"Growth in attendance and participation is important," Shockley said. "But we have to look at things beyond Sunday morning worship — small groups, mission opportunities, places where we can intentionally build relationships and help people to find a connection back to a relationship with God."

Not long ago, it looked like Evangelical United Methodist Church in Billings, Mont., was in real trouble.

When Evangelical's current pastor, the Rev. Jeremy Scott, arrived in 2010, the church had a regular attendance of 82 and had declined at least 10% each year for a decade. The church also had financial problems - the kind, as Scott recounts in his blog, that gave him "Keep-you-up-at-night panic."

What turned things around was not a capital campaign, Scott said, but a nine-month sermon series on the Acts of the Apostles and the issues facing the early church.

"The series on Acts focused us away from our financial troubles and back onto being the church," Scott told United Methodist News Service. "The growth in our giving has come as a response to this refocus."

Sometime during the last two years, he said, the church members' conversations also changed "from maligning what we don't have (young families, money, energy) to (recognizing) what we do have and how we can put it into action."

Scott has seen the Holy Spirit at work in members of his congregation.

"When I arrived, people treated my church as Lazarus already in the tomb and 'he stinketh,'" Scott recalled. "The most amazing thing to me is that all the leadership who bought in and did the hard work of rebuilding were in the pews when I got there, written off by everyone. Not all in positions of formal leadership, but just waiting to be asked. They are the real agents of resurrection."

A broader idea of vitality is reflected in the Vital Congregations initiative which, starting in 2011, asked United Methodist congregations and conferences around the globe to set goals in five areas:

Valdez Barker of the Connectional Table expects that church leaders will look at additional indicators of vitality in the future.

She noted that the United Methodist Commission on Religion and Race is encouraging congregations to look at how they reflect their neighborhoods.

"Where God has planted us, do the people worshipping reflect the community in which we live? Unfortunately, I don't think that's true," Valdez Barker said. "If we really are for transformed lives, then what are we doing to transform the lives of the people in our own backyard?"

Mountain Sky Area Bishop Elaine J. W. Stanovsky says she knows whether a congregation is vital soon after walking through its door.

"When I visit a church, it doesn't take long at all to determine whether this is a place that is in the habit of inviting and receiving people into the community," she said. "(You can tell) whether the systems are transparent to guests and newcomers or whether you have to be a lifelong member to know where to find a cup of coffee."

When a church is vital, she said, "life spills out and every aspect of the church is affected."

Schol cautions that just because a congregation is vital does not mean it necessarily is sustainable for the long term.

Churches in low-income areas may be seeing their resources drained by buildings that are too large or too old to maintain.

"Vitality indicates a church is giving life, (but) not always sustaining its own life," Schol said. "A challenge for our denomination is the large number of small congregations that are becoming less sustainable because of the cost of ministry. Many of these are vital congregations that are unable to sustain building and personnel costs."

Scott of Evangelical United Methodist Church in Montana knows that despite his congregation's recent growth in attendance and giving, it still faces challenges.

"We still have a lot of deferred maintenance on the building to deal with, but we continue to chip away at it," he said. "Right now I'd say we need to be at 125 to 150 on a Sunday to really breathe easy. But all signs point us that way."