• Xenophobia, the fear or hatred of strangers or foreigners, is widespread in South Africa.

• Church workshop focuses on educating youth about the negative impact of xenophobic attacks.

• United Methodists are working in collaboration with the Council of Churches of South Africa.

During a recent workshop in Soweto, South Africa, youth were asked to define the words “xenophobia” and “foreigner.” Many participants responded that foreigners are black Africans from other countries. White South Africans, on the other hand, are called “tourists,” they explained.

Working together, United Methodists and the Council of Churches of South Africa are trying to change that perspective. Recently, they offered a worship service and workshop for youth. The purpose was to educate about the negative impact of xenophobic attacks on society and the meaning of being “foreign.”

Xenophobia — fear or hatred of strangers or foreigners — is widespread in South Africa, where harassment and violence against African and Asian non-nationals are routine and sometimes lethal, according to Human Rights Watch.

The situation reached crisis proportions on May 11, 2008. Riots broke out in Soweto, a township of Johannesburg, where nationals and foreigners had lived together peacefully for years. Longtime neighbors attacked those they considered foreigners.

Many victims were immigrants from Mozambique, Somalia and Zimbabwe. Others were singled out because they spoke another language. Violence soon spread to informal settlements in other major cities, including Durban and Cape Town.

“It was, and remains, sad to remember or see that … thousands of immigrants, mostly Africans, were harassed across the country, regardless of whether they were legally in the country,” said Thabang Ntuli, a community leader in Chiawelo.

Thirteen years later, xenophobic attacks and intimidation continue, and United Methodists and the Council of Churches in South Africa hope that the workshop they organized will help pave the way toward change.

“The xenophobic attack,” said the Rev. Innocent Muhomba, “is a baby of ignorance that is being passed from one generation to another. If we succeed in educating young people about what a foreigner is and how much they benefit from them, we will create an Africa without xenophobia.” Muhomba is the pastor in charge of the United Methodist Northwest Circuit.

“Our church is diverse in terms of culture, age, gender and nationality,” said Francis Kubayi, chair of the Chiawelo pastoral council. He said similar workshops “should be encouraged and carried out in all our circuits” to promote and create an atmosphere of respect, love and equality, culminating in change and a more positive mentality, especially for the youth. 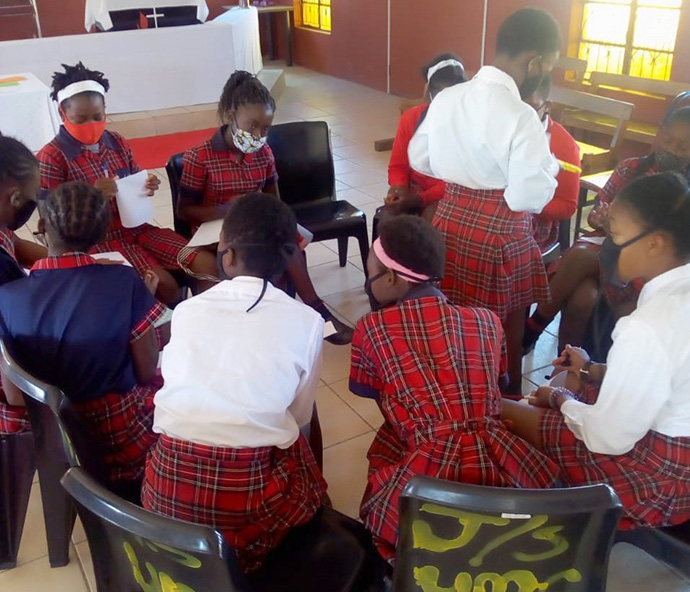 Students discuss the effects of xenophobia on their communities and learn how they can avoid stereotyping during a United Methodist-sponsored workshop in Soweto, South Africa. Photo by Francis Kubayi, UM News.

During the training, participants were asked what was precipitating the attacks on foreigners. One student answered that “foreigners must be killed because they sell expired goods and take our jobs.”

A key goal was to replace assumptions with accurate information.

Another participant said the event made clear that after crossing borders to another country, one automatically becomes a foreigner. “To avoid being treated as such,” the student said, “I need to treat others like my brothers and sisters.”

“Love Yourself” became the motto of the day as students heard the words from 1 Peter 4:8a, which reads, “Above all, maintain constant love for one another.”

The Rev. Easter Musakwa, the pastor in charge of the Johannesburg North Circuit, said, “I think the students were the right group to be targeted. I strongly believe that if these workshops could be held in schools, it would eradicate the xenophobic mind of South African youth.”

“We will do this intentionally,” she added, “knowing that, as a church, we will be preaching the word of God through these workshops, with a fervent hope that these workshops will increase peace in the communities.”

AlvinTiri Makunike is the director of communications for the South Africa Conference.