On any given Sunday, more Christians are attending worship services in China than in the United States or Europe.

That is one indicator of the challenges presented by a changing world of ecumenism as The United Methodist Church reorganizes how it addresses issues of Christian unity and relationships with other faiths.

After a denominational vote by the 2012 United Methodist General Conference, the formerly independent Commission on Christian Unity and Interreligious Concerns has become an office on ecumenical and interfaith ministries lodged within the United Methodist Council of Bishops.

The Office of Christian Unity and Interreligious Relationships, which began Jan. 1, is supported by an 11-member steering committee of lay and clergy representatives and the council's leadership team on ecumenical and interreligious relations. Heading that team are Bishop Sudarshana Devadhar, chair; Bishop Michael Watson, secretary; and Bishop Mary Ann Swenson, ecumenical officer.

The new office, led by the Rev. Stephen Sidorak Jr., ecumenical staff officer, will remain in New York with previous staff members of the commission.

During a Jan. 24-26 organizational meeting of the steering committee, bishops, staff and transition team members, Sidorak reminded the group that the restructuring proposal was initiated by the commission as a way to "strengthen and enhance" the denomination's efforts toward the unity of Christ's church.

The focused work in Christian unity began nearly 50 years ago, when the Methodist Council of Bishops created the ecumenical committee that gradually grew into an independent commission. The commission's many accomplishments included ecumenical dialogues and agreements, resolutions on Christian-Jewish and Christian-Muslim relations, and acts of repentance related to African-Americans and indigenous peoples.

"The journey has now come full circle," said Bishop William Oden, former ecumenical officer, as he recounted that history. "It is the prayer of all of us that this journey and this disciplinary mandate to 'strive toward Christian unity and strive toward a stronger relationship with other faith communities' might now be realized." 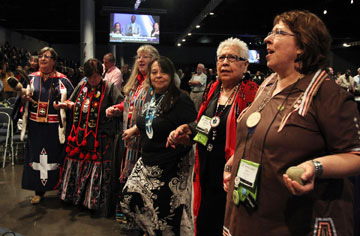 The Rev. Carol Lakota Eastin, far right, and others of Native American heritage take part in "An Act of Repentance toward Healing Relationships with Indigenous Peoples" service, an initiative of the Commission on Christian Unity approved during the 2012 United Methodist General Conference in Tampa. A UMNS photo by Kathleen Barry.

The world of ecumenism has changed in recent years. A trend toward complexity and disunity has spawned 43,800 different Christian denominations in the world today, the Rev. Wesley Granberg-Michaelson, former top executive of the Reformed Church in America, told the group.

Existing ecumenical structures cannot comprehend or respond to such diversity. He noted that the World Council of Churches, where he served as director of church and society from 1988 to 1994, only represents 349 member churches.

"Most of the world's Christians function in separate worlds of ecclesiastical apartheid," Granberg-Michaelson declared.

More than one of every four Christians is Pentecostal or part of the charismatic movement, according to Pew Research. Pentecostals come to the global south "without the taint of colonialism," he said, and growing independent churches in Africa demonstrate how some African Christians are pulling away from former colonial powers and their denominations. In the United States, Latino Protestants now outnumber Episcopalians, and many of them are charismatic as well.

These church groups "function largely in a separate world," Granberg-Michaelson explained. "In my judgment, the gulf between these separate worlds now constitutes the most pressing challenge to Christian unity in the 21st century."

The scheduling of three global gatherings within a 15-month period - the Aug. 27-30 Pentecostal World Conference in Malaysia and the Oct. 30-Nov. 8 World Council of Churches Assembly in South Korea, both in 2013, and the Oct. 27-31 World Evangelical Alliance General Assembly, also in South Korea, in 2014 - highlight the divide.

"The separate worlds in which Christians live are structurally institutional and at all levels - global, regional, local," he explained. "They live in parallel worlds, doing similar things, like advocacy and mission."

Devadhar, a former director of the Commission on Christian Unity and Interreligious Concerns, noted that while the world is diversifying religiously and culturally, some United Methodists are still arguing over "who is in and who is out" on church membership rolls.

He expects the bishops' new Office of Christian Unity will provide "a new opportunity for us to do new ecumenism."

The Rev. Clayton Oliphint, a steering committee member from the South Central Jurisdiction, wants the new office to represent, connect with and encourage local congregations.

Ecumenical witness can enhance a congregation's vitality, he pointed out, but too often local churches erect barriers to Christian unity.

Dialogues between The United Methodist Church and other communions have been an "especially significant" part of the denomination's Christian Unity work, says Bishop William Oden, former ecumenical officer. The oldest continuing dialogue, started in 1966, is with the Roman Catholic Church.

Dialogue also can lead to "full communion," as it did with the Evangelical Lutheran Church in America and Pan Methodist churches. A vote on full communion with the Episcopal Church is possible at the 2016 United Methodist General Conference.

In the United States, the rise of the "nones" or people who have no religious affiliation "is no accident," said Oliphint, pastor of First United Methodist Church in Richardson, Texas. "A whole generation of people has been turned off by the churches because of the barriers we have erected."

The Rev. Knut Refsdal, the committee's representative from the European Central Conference, shared an example of unity from Sweden, where United Methodists, the Mission Covenant Church and the Baptist Union have formed a new church.

Although "Methodist" is no longer part of the name, the heritage and beliefs remain, and Refsdal believes the union has strengthened the church in Sweden. "In a way, there are more Methodists in Sweden than there used to be," he said.

The United Methodist Church has much to contribute to the ecumenical movement, and Refsdal hopes the denomination will play a larger role in bringing Christians together. "It's part of our DNA to be a bridge-builder," he added.

Granberg-Michaelson believes the Global Christian Forum, which grew out of the 1998 World Council of Churches assembly in Harare, Zimbabwe, offers "some real hope" in transcending the barriers between Christians, despite its modest size and budget. "It seems like a mustard seed, but one wonders if it could grow and flourish," he said.

Bishop Paulo de Tarso Oliveria Lockmann of Brazil, president of the World Methodist Council, stressed the importance of unity with the 77 denominations represented by the council. "This big challenge begins in the heart of the Methodist family," he said.

The council's top executive, the Rev. Ivan M. Abrahams of South Africa, urged the group to avoid "business as usual" to cast a new ecumenical vision.

"I'm filled with hope and great expectation," he said about the Office on Christian Unity and Interreligious Relationships. "I'm confident this is more than just a name change."

Sidorak noted "a great spirit of togetherness going forward" at the meeting's conclusion. With subcommittees established and at work, the steering committee's next steps will include drafting an organizational covenant, along with vision and mission statements, he said.