Huruma United Methodist Church’s primary school is providing new hope and opportunities for vulnerable children living in the Mathare Valley slums on the eastern side of Nairobi.

More than half a million households reside in an area that is roughly half a square mile. Children who are not in school through eighth grade often are consumed by a culture of gangs, drugs, prostitution and other criminal activity.

Every year, about 13,000 young girls from Mathare leave school permanently due to pregnancy, according to Kenya’s Centre for the Study of Adolescence.

There are an estimated 70,000 children in the Mathare Valley, with only three to four schools to educate them, according to Collaborative Upgrading Plan research conducted by the University of Nairobi and University of California in 2011. 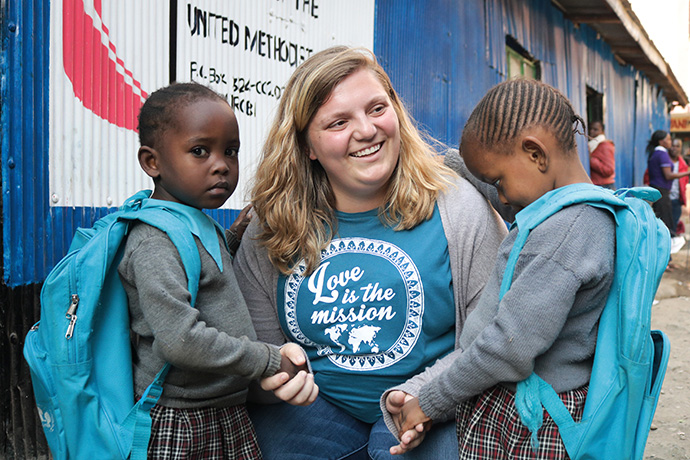 Rachel Imbwaga (left), 5, and Miriam Nduku, 4, visit with Carly Etzkorn of Clarksbury United Methodist Church in Harmony, N.C., during the church’s 2019 mission trip. Both girls are orphans and kindergarten students at New Hope Education Center, a primary school run by Huruma United Methodist Church in the Mathare Valley slums on the eastern side of Nairobi, Kenya. Photo by Gad Maiga, UM News.

Since 2016, the church’s New Hope Education Center has been providing educational and psychosocial support to orphans and other vulnerable children.

“Having kids attend school is a mammoth task … Most students miss classes due to bad weather and illness, lack of school fees, family reasons and work-related activities.

“Some parents sell their children's textbooks in order to satisfy their desire for drinking, and others to buy food. Many pupils are orphans and cannot even afford basic items used in school.”

The Rev. Davies Musigo, senior pastor at Huruma United Methodist Church and the coordinator of New Hope Education Center, said the school aims to offer basic education to children who wouldn’t otherwise have the opportunity.

“Last year, we rescued three street kids, two Muslim girls who were to be married off at an early age, and two young girls who were facing child labor as babysitters to the benefit of their parents, and we enrolled them in our school,” he said.

The school works in partnership with the community and key stakeholders, including the country’s Ministry of Education, civil societies and community leaders. New Hope also enlists the help of parents to identify, enroll and maintain relationships with vulnerable children. The parents are trained to talk to families about the importance of education and encourage children who have dropped out to re-enroll.

Songoi said the school works with teenage mothers by providing mentoring and opportunities for catch-up lessons twice a week while daycare is provided for their children.

According to Edna Anyango, deputy head teacher, students also play a role in educating their peers.

“Through our school programs, children who are in school act as ambassadors and convince the ones out of school to enroll with the promise of incentives like free lunches, books, pens and bags — some of which were donated by UNICEF,” she said.

She said teaching in the slums comes with its own unique set of challenges.

“It is not such an impossibility for a pupil to come to class with a gun or bag of weed. … Some of the students in your class are the same people who spend the night breaking into houses and pulling the trigger on ‘troublesome’ victims. … By the age of 10, a good number of those in your class are already engaging in sexual activities. Some are even doing it as part of the family's business, especially girls,” she said.

She said the teacher’s role in the slum goes beyond that of teachers elsewhere.

“You become a real parent out to instill the right knowledge, skills and attitudes in the learner in the best way possible.”

“My son Ngulu abandoned me and went on the streets. The Rev. Musigo … brought him back home. He then took my two kids to New Hope, which in turn motivated me to join Huruma United Methodist Church.

“Indeed, there is hope at New Hope. I bless pastor Musigo for changing my life and that of my kids,” she said.

Francis Mallo, the school’s administrator, said despite the many obstacles, Huruma United Methodist Church is making strides in reaching children in unique and life-changing ways.

He admits, however, that the school’s financial restrictions have made it hard to retain qualified teachers. Many are forced to work second jobs to boost their incomes.

The school’s temporary building also is of concern amid the government’s threats to close down private schools that are not up to standards, Mallo said.

Clarksbury Church has committed to be in long-term mission with Huruma and New Hope Education Center, as well as other churches and ministries of the Nairobi District, said the Rev. Wilton T. Odongo, conference secretary to the East Africa Episcopal Area and Nairobi District superintendent. He said with assistance like that, New Hope Education Center could fulfill its mission to advance the lives of less-privileged children and provide a healthy and hopeful future.

“Hope is a good thing, maybe the best of things,” Odongo said.

As infections and deaths from the coronavirus mount, chaplains are challenged to do their jobs in a world where physical contact is forbidden.
Theology and Education

The United Methodist university is practicing social distancing to curb the spread of the coronavirus.
Local Church

Helping children during the COVID-19 crisis

Sheltering in place is confusing for children accustomed to daily contact with friends and teachers. Church leaders offer advice on how to help them cope.