Editor's note: This updates the story to correct an announcement made May 4 about Amendment 2. The amendment, initially announced as having passed, did not pass.

The United Methodist Church rejected several amendments that could have paved the way for making the church in the United States one of several regional bodies throughout the world.

More than 49,000 representatives of the worldwide church rejected 23 amendments to the denomination's constitution that would have allowed for the organization of groups of annual conferences in a single nation or area into a larger regional conference. The term "central conference," referring to the church outside the United States, could have been replaced by "regional conference" in other parts of the world.

Proponents of the changes said the new structure would reflect the growth of the church outside the United States, but some opponents expressed concern that it would lead to the division of the church into national groups.

The United Methodist Council of Bishops on May 4 announced and ratified the results of voting from some 135 regional conferences on constitutional amendments approved by the 2008 General Conference, the denomination's top lawmaking body. For a proposed amendment to be ratified, two-thirds of the aggregate number of voting annual conference members must approve.

Five of the 32 proposed amendments were ratified:

Illinois Bishop Gregory Palmer, council president, announced May 5 that Amendment 2, requiring ethics policies in United Methodist organizations, did not pass. The amendment failed to get the two-thirds approval required, with 32,413 votes in favor and 16,596 opposed.

The proposals for restructuring the church were denied, in many cases drawing more than 28,000 votes against and about 21,000 votes in favor.

An amendment on the inclusiveness of church membership, which some interpreted as a challenge to church teaching on homosexuality, also did not receive a majority of votes. The amendment would have clarified that "all people are eligible to attend worship services and receive the sacraments."

In other business at its spring meeting, the Council of Bishops unanimously decided not to call a special session of General Conference on issues dealing with pensions and the reorganization of the church. The assembly's next regular gathering will be in 2012 in Tampa, Fla.

Some members of the Council of Bishops, which backed the proposed amendments on the restructuring of the church, criticized the "imperialistic mindset" of the churchwide votes. 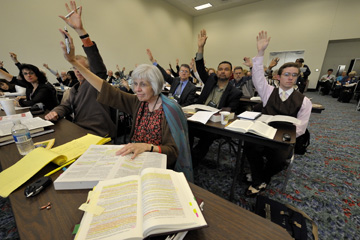 Delegates vote in a legislative committee at the 2008 General Conference. A UMNS file photo by Paul Jeffrey.

"Those who have power have refused to share power," said San Francisco Area Bishop Warner Brown.

Retired Bishop Emilio DeCarvalho of Angola said the votes keep in place a "40-year-old colonial structure" that is a denial of the worldwide nature of the church.

Shortly after the voting results were announced, the bishops decided to continue their conversation in executive session, closing the meeting to the public.

In looking at preliminary figures broken down by conference, voters from the central conferences in Africa were the strongest opponents to the proposed changes, rejecting the amendments on restructuring by as many as 4,900 votes out of 5,165 votes cast. European voters, in contrast, overwhelmingly supported the amendments.

Bishop Palmer said church leaders will have to "think anew" about opportunities to adapt structures to reflect the growth of the denomination outside the United States.

The Committee to Study the Worldwide Nature of The United Methodist Church said in a statement that there were many lessons to be learned from the vote.

"We believe members of annual conferences around the world are sending a strong message that this specific vehicle for change was flawed," the statement said. "It left many issues open to broad interpretation. It was unclear how the changes, if approved, would have been implemented."

But the votes do not change the fact that the focus of the church is moving from North America to other parts of the world. As it continues its work, the committee said it is seeking information from United Methodists around the world and will take the amendment votes into serious consideration as it develops "clear biblically- and Wesleyan-focused strategies" for regional church bodies.

At its recent meeting in the Philippines, the group decided issues regarding the ordination of non-celibate gay and lesbian ministers should be left to the 2012 General Conference.

There was little discussion as the bishops accepted a recommendation from their executive committee not to call a special session of General Conference a year ahead of the Tampa meeting.

The board of directors of the General Council on Finance and Administration late last year encouraged the Council of Bishops to call a special meeting of General Conference to deal with concerns about pension funding in the United States and the reorganization of the denomination.

North Georgia Bishop Mike Watson of the bishops' Pension Task Force said the cost of holding a special session would be more than any potential savings from changes to the retirement funds.

In an interview, he also said there is no immediate danger of any annual conference being unable to meet its obligation and any changes need careful study. "Just hurrying along is not the way to run a pension program," he said.

Bishop Leo Soriano of the Philippines also expressed concern about calling a worldwide meeting to deal with the issue of U.S. pensions.