United Methodists are joining in prayer and reaching out in support of their Sikh neighbors after a gunman's attack Aug. 5 at a Sikh temple in suburban Milwaukee that left seven people - including the shooter - dead.

"The hope is that we can build community and know our neighbors and extend Christ's grace to those around us - his love and his way of peace," said the Rev. Paul Armstrong, pastor of Oak Creek United Methodist Church.

The Rev. Deborah Thompson, the superintendent whose district includes Oak Creek, said the district would mobilize its spiritual care team as well as its Stephen ministers to listen and provide counseling if needed. Thompson said that she and five United Methodist clergy who are natives of India plan to visit the temple in a show of support on Friday, Aug. 10.

The United Methodist Commission on Christian Unity and Interreligious Concerns, the denomination's ecumenical agency, issued a statement Aug. 7 expressing grief after the tragic violence. "May nonviolence, compassion and love prevail; and may we all live into the great truth that all people are brothers and sisters of one another," said the Rev. Steve Sidorak Jr., the agency's top executive.

Wisconsin Area Bishop Linda Lee has called for United Methodists to join other Wisconsin Christians in a day of prayer Sunday, Aug. 12, for the families and others affected by the tragedy as well as for the entire Sikh community. The Wisconsin Council of Churches, which the bishop has served as president, has also called for Sunday to be a day of prayer.

"As United Methodists, we accept and respect all faiths, and do not condone any type of hate crime, which this appears to be," she said in a statement. 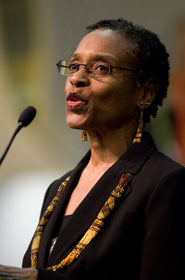 Wisconsin Area Bishop Linda Lee has called for United Methodists to join other Wisconsin Christians in a day of prayer on Sunday, Aug. 12. A UMNS file photo by Mike DuBose.

She noted that the Social Principles in the United Methodist Book of Discipline, the denomination's law book, "direct us as United Methodists to embrace all hues of humanity, delight in diversity and difference, and favor solidarity transforming strangers into friends."

Lee and the Wisconsin Council of Churches both expressed hope that this coming Sunday would be "an occasion for Christians in Wisconsin to learn more about the Sikh religion."

The Milwaukee Journal Sentinel reported that children were in Sunday school, women were preparing the free weekly meal and others were preparing for worship when a gunman entered the Sikh temple and began shooting. Among the victims were one woman and five men, including the temple's president, Satwant Singh Kaleka.

Oak Creek Police Lt. Brian Murphy, who was shot while trying to assist a victim, remains in critical condition but is expected to survive.

Law enforcement officials have identified the gunman, who was killed by police, as Wade Michael Page, a 40-year-old Army veteran.

Law enforcement officials have said they are investigating the assault as a possible hate crime.

Call for prayer and interfaith dialogue

From the 2008 Book of Discipline, which outlines the denomination's law and doctrines:

From the 2008 Book of Resolutions, the denomination's statements on social issues:

Leaders across the United States, including President Obama and Republican presidential nominee Mitt Romney, have called for prayer in response to the shootings.

"It's very sad to see something like this happen to a peaceful place of worship," South Carolina Gov. Nikki Haley, a United Methodist who grew up Sikh, posted on her Facebook page. "Our prayers and condolences go out to the families of the innocent victims and the family of the heroic officer in this senseless tragedy."

The Wisconsin shooting comes just slightly more than two weeks after a gunman killed a dozen people at an Aurora, Colo., movie theater. It also comes during a spike in violent crime in Chicago that has drawn the response of church leaders.

"It is impossible to understand or explain the violence that erupted Sunday," said Chicago Area Bishop Hee-Soo Jung in a statement. "The pain and fear that now grips all Sikhs in the United States must be countered with our prayers, our embrace and our support."

Jung formerly served as a pastor and district superintendent in the Wisconsin Annual (regional) Conference and will return to the conference as its bishop on Sept. 1 after Lee retires.

He urged United Methodists to continue "to build bridges of respect and community with our brothers and sisters through our interfaith efforts."

He acknowledged that there are many causes of violence in the world, not all of them addressed by greater interfaith understanding. Yet, he said, "as we embrace one another, we model God's great Kingdom and demystify that which we do not comprehend."

Sikhism is a monotheistic faith that began in the late 15th century in the Punjab region, which is split between what is today India and Pakistan. It is an offshoot of Hinduism, much the same way Christianity has its origins with Judaism.

Estimates of the number of Sikhs in the United States vary from 400,000 to 750,000. There are more than 20 million Sikhs worldwide. Among them is India's Prime Minister, Manmohan Singh, who called Sunday's shooting "a dastardly attack."

Since Sept. 11, 2001, Sikhs in the United States have faced discrimination, vandalism and even violence because people have confused them with Muslims.

One reason is that Sikh men traditionally wear turbans and grow out their beards. When the Sikh faith developed 500 years ago, the turban was the headgear of kings and other men of high status. Sikhs wear turbans as a sign of their equality before God.

Sikh means disciple or student in the Punjabi language. Sikhs see themselves as disciples of God who follow the writings and teachings of 10 gurus - that is, teachers - who lived between 1469 and 1708. Before his death in 1708, Guru Gobind Singh gave guruship to the Sikh scriptures, the Sri Guru Granth Sahib. A Sikh temple is typically called a gurdwara or gurudwara, which literally means "gate to the guru."

New Jersey Area Bishop Sudarshana Devadhar, a native of India, said that 11 years ago when he was a district superintendent in New York, some youths set fire to a Sikh temple in Oswego County.

"They had confused the name of the Sikh shrine, Godin Sadan, for the words, 'Go Bin Laden,'" Devadhar recalled in a special letter to his conference. "Yet out of tragedy that was born of ignorance and a misguided search for revenge came something positive: There was an outpouring of love and sympathy from people of all walks of faith in the area and a sincere desire to educate all about what Sikhism is about, including their values of love and tolerance."

The Rev. Harsha Kumar Kotian, pastor of South Milwaukee United Methodist Church in Wisconsin, echoed the need for greater interreligious understanding. Kotian is a native of India who has lived in the United States for 45 years.

"Even if they were Muslims, we shouldn't hate Muslims," he said. "We have to live together as people of faith with a diversity of faith and other religions."

Armstrong of Oak Creek United Methodist Church said confirmation classes from his church have visited the Sikh temple in the past.

"All I can say is that they were very warm and hospitable people," he said. Beyond those visits, he said, the relationship between the two congregations "hasn't gone much further.

"But I'm sure after this incident, there will be a strong drive after everything settles down for the local community to be drawn closer together."