Teacher Elenita Laurente leads singing, and the children participate at the top of their little lungs. Laurente grew up in squalid conditions and is grateful for the opportunity to teach and raise six children who do not have to live as she once did.

Sun Sook Kim stands outside and peeks in the front window of the one-room classroom. She acts as if she has never seen such a scene, although she has been a missionary in the area for 20 years.

Kim is leading a group of United Methodists from the United States on a tour of her world. Prior to visiting this room of beautiful, singing children, the group saw where the children live a few blocks away in the "new" Smokey Mountain.

Children play on a dirty mattress.

Poorest of the poor

Hundreds of families live on the edge of the city’s garbage dump nicknamed Smokey Mountain because, during the summer months, the mountain of rotting garbage often ignites underground and sends out toxic clouds of smoke that hangs over the area like a blanket.

This is the rainy season so the smoke is drowned out by the rain. Of course rain just brings on a different kind of misery — thick, stinking mud.

Smokey Mountain is one of the five poorest places in the world, Kim says. The people who have built homes here make their living by scavenging through the city’s garbage looking for items that can be recycled for money. The average return on a hard day of ripping through bags of stinking trash is around 200 pesos — about $2 in the United States.

In the 1970s, what was once a small village by the sea became the growing, burgeoning city of Manila’s primary dumping site. By the early 1980s, Smokey Mountain became an international embarrassment to then President Ferdinand Marcos. He had the site bulldozed, and new public housing was built for the poor about 25 miles south of Manila. The dump was closed in 1995, and the "new" Smokey Mountain opened a mile away.

Families who could not make the minimum $8 monthly mortgage payments in the government-built apartments were forced once again into shacks along the new garbage heap. 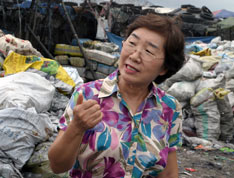 Literacy consultant to the nation

Kim has been the United Methodist Global Ministries missionary to this area since 1986. She has a big job. She serves as literacy consultant for the whole country, training teachers and working with the illiterate through local churches, seminars and community centers.

She is also a registered nurse and coordinates first aid, public health teaching or family planning as needed. She conducts semiannual medical and dental clinics and also is involved in organizing new congregations.

When she first came to Smokey Mountain, she recalls, it was hard not to be angry at the miserable conditions in which people lived. She just wanted to "fix" them by covering their wounds and providing food and clothes.

"The little children with their bare feet –– no shoes or slippers –– just walk on the garbage," she said. Every foot has crisscrossed wounds.

Most of the people have asthma and other respiratory disease from the smoke. Many also have tuberculosis, and hepatitis is common. 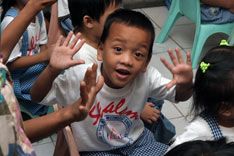 Kindergarten –– a bridge to Jesus

"The purpose of this kindergarten is to be a bridge to bring mothers and children to Jesus Christ," Kim said. "At the very beginning I could not enjoy my work because I had such anger and depression. I kept asking, 'Why do these people have to live like this?' Then I realized it was my mission to bring them hope through Jesus Christ."

The kindergarten starts a child on the path to an education, and Kim says an education is a way out of poverty.

Kim believes God sent her Matthew 6:33 as an answer to her prayers, and the verse has been her guide: "But strive first for the kingdom of God and His righteousness, and all these things will be given to you as well."

"I cannot offer them a kingdom here on earth," said Kim, "but I can show them the way to a kingdom in heaven."

*Gilbert is a United Methodist News Service news writer based in Nashville, Tenn. She compiled this series based on her trip to the Philippines in July 2007.

United Methodist Board of Global Ministries