A $10,000 grant from the United Methodist Committee on Relief was announced July 11 after 37 people, including some United Methodists, were killed during an attack in Gambella in western Ethiopia.

The clash between separatists and government forces last month lasted for three days. At least three of the deceased were members of Ethiopia United Methodist Church.

The UMCOR grant will provide food and hygiene kits and address other immediate needs of people affected by the civil unrest. Late in 2021, the Ethiopia United Methodist Church received an UMCOR grant to address flooding. Plans are also underway for a larger-scale relief project there.

Southwestern Ethiopia has experienced an upsurge in violence in recent months with kidnappings and attacks being reported. More than 7,500 church members are faced with uncertainty and instability due to the continuing fighting in Gambella.

During the fourth session of the Kenya-Ethiopia Annual Conference held in Nairobi March 10-13, Ethiopia became a district, having been a mission area for a few years under the conference. Currently, the church in Ethiopia has five mission areas: Jimma, Nekemty, Awassa, Addis Ababa and Gudare.

After visiting the bereaved church families and the hospitalized survivors of the vicious attack, Mossissa said that children were among the casualties.

Mossissa urged Christians in Gambella to be determined and ready to take an active part in the needs of the people around them.

“We are being situationally aware, biblically faithful and culturally astute as we seek to overcome obstacles arising from the attack and leverage limited resources in these trying times,” he said. 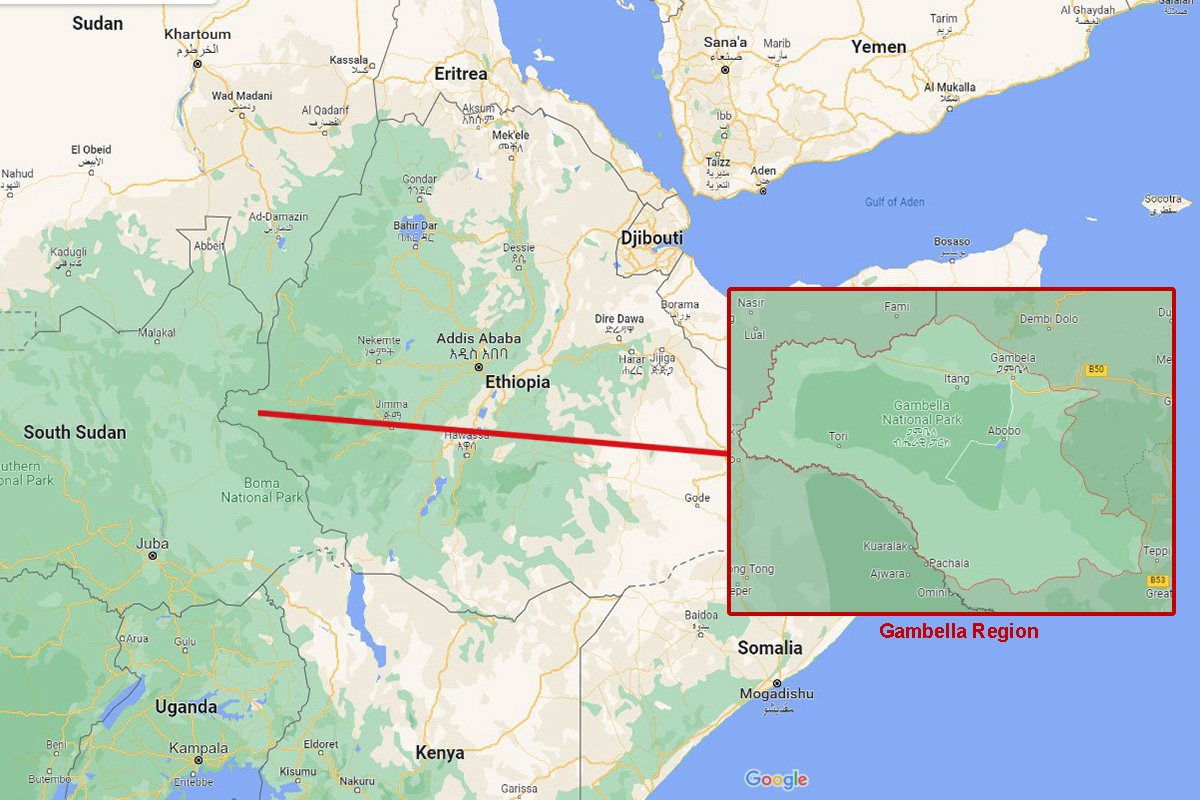 The United Methodist Committee on Relief announced it is giving a $10,000 grant to help provide food and address other immediate needs for people affected by civil unrest in the Gambella Region of western Ethiopia. Map courtesy of Google Maps. To view larger, click here.

The Rev. Obang Olamo, senior pastor at Ethiopia United Methodist Church, said the attack forced thousands of people to run for their lives and seek refuge in bushes, church compounds and public buildings.

“The rebels used everything they could get (in) their hands, ranging from ammunition and weapons to vehicles, to attack people,” Olamo said. “Many people have been left with no place to call home, including hundreds of our church members displaced during the weeklong attack,” he continued. “People are dying of hunger after spending a whole week in bushes with hundreds seeking refuge in our church compound.”

The Gambella Liberation Front/Army and the Oromo Liberation Army had earlier declared that they were undertaking a coordinated offensive on the Gambella region's capital city, as verified by the regional state's announcement. The OLA also said its fighters were battling with government forces in two towns in western Oromia: Dembidolo and Gimbi.

The attack preceded a Gambella regional state’s security council meeting held on June 6 that gave priority focus to “illegal and lawless” forces operating in the region. The security council also agreed that the development of the Gambella region will not continue unless these shortcomings, both in urban and rural areas, were addressed in a short period of time.

Describing the current state of the city, Olamo said, “People have been released from church and school compounds but the situation is still very tense.” Olamo said the critical problem is that people are suffering from hunger and distress due to the loss of property through destruction and vandalism.

“Communities in Gambella need food support, as many children and the elderly have become very weak after spending days without food,” Olamo said.

Okani Ojulu, Ethiopia United Methodist Church’s project coordinator, said that heavy exchange of gunfire could be heard around town and continued for days while residents remained home with no movement aside from government military vehicles.

“We woke up to sounds of heavy gunfire,” Ojulu said. “We were not able to leave our homes. All we heard was an exchange of gunshots. We didn’t know what was going on.”

Ojulu noted that people are still living in fear of another attack.

“The suburbs resembled a battlefield with row after row of burned-out homes and the scorched remains of cars and market merchandise,” Ojulu said.

“There is still war in neighboring towns of Gimbi and Dembidolo, 10 kilometers from our town,” he continued. “We request your prayers and encouragement as we seek lasting peace in Gambella and neighboring towns.”

Mossissa said humanitarian aid is needed to “cushion our church members against the impact of the war.”

“We believe that in crisis, God glorifies himself and uses the church to do it,” he said. “The tension in our cities is real; you can feel it in this frozen air.

“Should there be more chaos and confusion, the United Methodist churches could be lighthouses of hope and security in their communities.”

In addition to the immediate needs, the church leaders said they need development funds after temporary church structures were overwhelmed by survivors seeking refuge.

Mossissa reiterated that the unity of the church is vital amid continuing rebel invasions in Gambella and other parts of Ethiopia.

"The Gospel will provide relief, hope and healing to broken, fallen and terrified cities in Ethiopia," Mossissa said. "We have God's power to achieve this. We can do it by God's grace, and we shall do it for God's glory."