Four members of Huruma United Methodist Church in Nairobi were hurt when a seven-story residential building collapsed April 29 during heavy rains and flooding. Ten church families, rescued with minor injuries, lost all of their belongings in the rubble.

The BBC reported that at least 36 died in the collapse of the building in the Huruma area. The structure had been earmarked for demolition. The owner was arrested and charged with manslaughter. Four people were rescused May 5 after being trapped in the rubble for six days.

About 136 people were freed from the rubble, the BBC said. More than 90 were still missing.

The Rev. Davies Musigo, pastor of the Huruma Church and 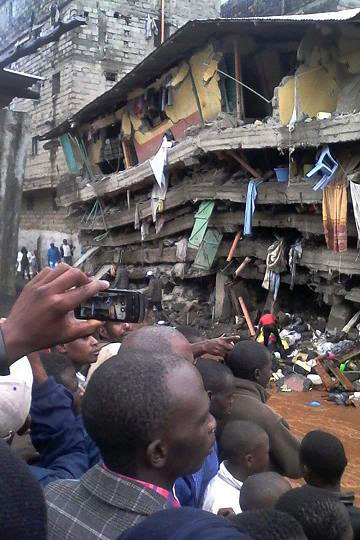 The rubble of the seven-story building that collapsed. Photo courtesy of Wilton T.A. Odongo, UMNS.

associate superintendent of the Nairobi District, said more people from the church are not accounted for and are “believed to be residents of the collapsed building.”

All the injured church members have been released from the hospital but are living in tents.

Evans Musisi, a youth from the church, lived on the third floor of the building. He told National Television that he was rescued after spending three hours buried in the rubble. He regained consciousness at Kenyatta National Hospital.

East Africa Area Bishop Daniel Wandabula expressed condolences to families who suffered losses in the disaster. He urged the church to stand with Kenyans in prayer and to provide humanitarian support. One immediate concern is finding housing for the affected United Methodist families, whose children were to start the second semester of school this month.

“The church, is trying with its meager resources to feed and clothe the displaced families, but they have been overwhelmed by the needs of the people.”

Odongo is a district superintendent and a communicator for the East Africa Conference.