Most nations celebrate their independence day with some military pageantry. But not Norway.

The Scandinavian country takes pride in celebrating its national day on May 17 not with the boom of cannons but with parades of children.

United Methodist congregations near parade routes often celebrate the day by flinging open their doors for special services. This year, an international delegation of United Methodist leaders joined Norwegian church members in the festivities, which commemorate the signing of the nation’s constitution in 1814. 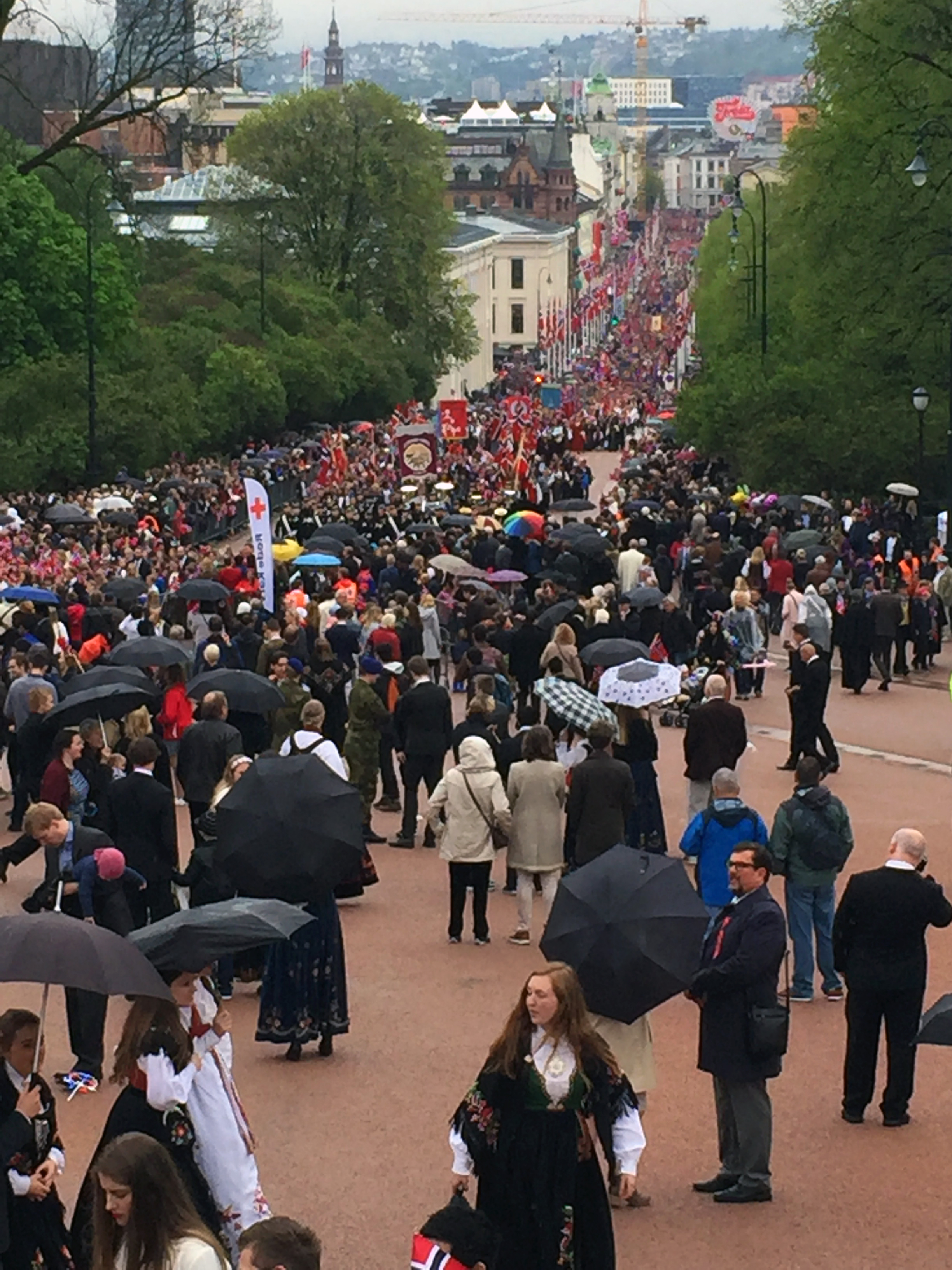 People, many waving Norwegian flags, fill the streets of central Oslo to watch the annual children's parade in celebration of Norway's National Day.  Photo by the Rev. Alfred T. Day III, top executive of the Commission on Archives and History.

The Connectional Table, a group of 59 clergy and lay people who act as a sort of church council for the denomination, opened its meeting in Oslo on the same day most Norwegians get the day off.

So the group’s members spent their morning watching as rows of flag-waving elementary school children and young people’s marching bands — playing everything from patriotic anthems to Michael Jackson’s “Beat It” — kept a steady pace in front of the country’s Royal Palace. The day’s weather was chilly with occasional bursts of rain, but the public mood was decidedly sunny.

Bishop Christian Alsted, the chair of the Connectional Table, leads the Nordic-Baltic Episcopal Area that encompasses Norway. However, this was the first time Alsted, a native of Denmark whose main office is in Copenhagen, was in Norway for its big national holiday.

The United Methodists stood among crowds where many of the women and more than a few of the men wore colorful bunad, traditional Norwegian dress. They joined in repeated cheers of “Hip, Hip, Hurrah.”

The group next attended a traditional lunch of hot dogs, sour-cream porridge and ice cream followed by a music-filled service at Centralkirken. The United Methodist church, just a few blocks from the parade route, is one of the city’s largest with about 600 baptized and confessing members. The day offered a chance to see a bit of the denomination’s multinational connection in action.

“God, our creator, we thank you for the opportunity to celebrate this day,” prayed the Rev. Maria Pedersen, one of Centralkirken’s pastors. “Thank you for our constitution, which enables freedom, diversity and equality for all.”

Norway, as an identified country, dates back to the 900s when Vikings ruled. But after the black death claimed about half of its population, including its king, Norway spent the next 500 years governed by its Scandinavian neighbors. 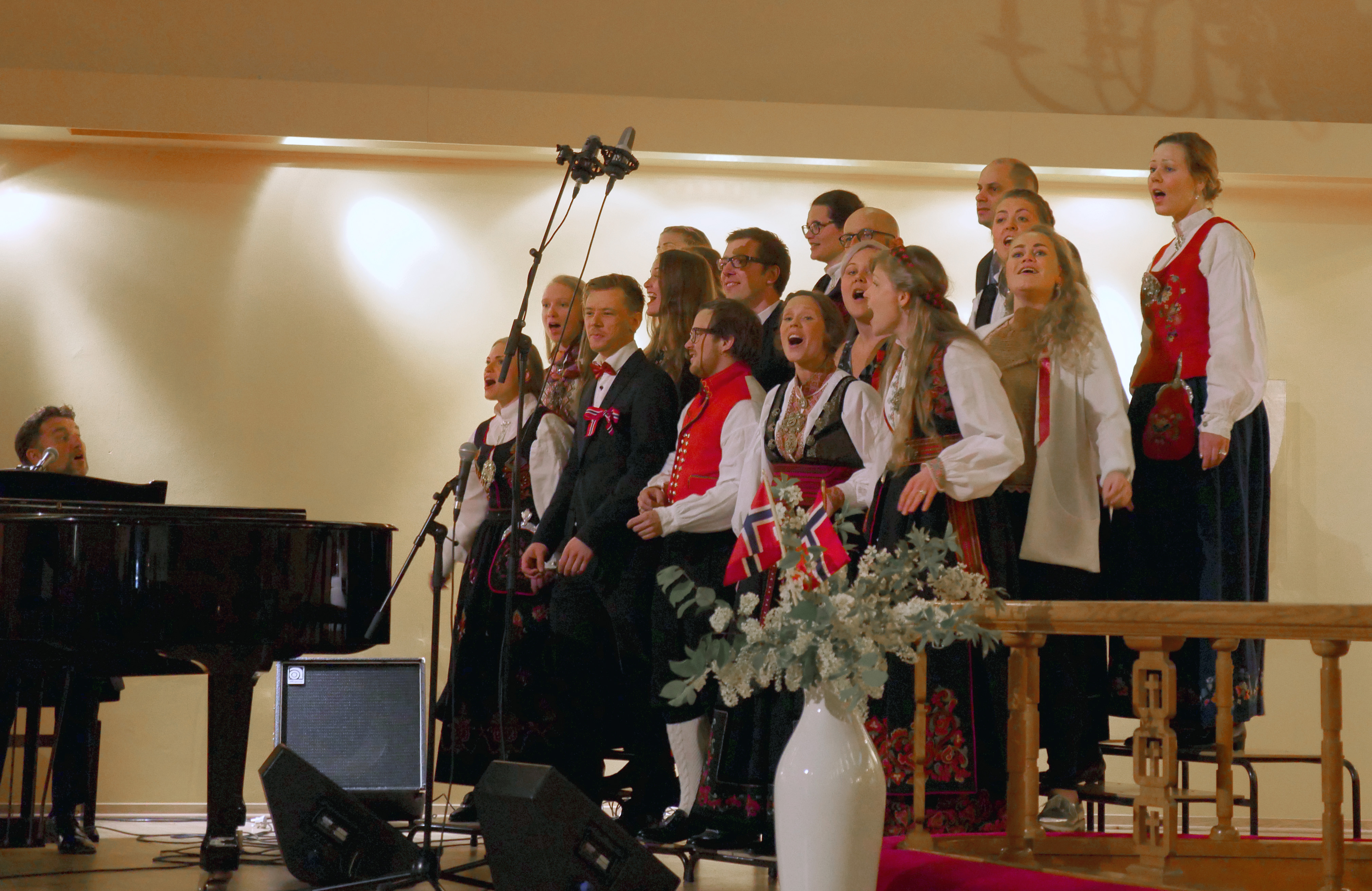 When Norwegians signed their constitution in 1814, they were under Swedish rule. However, the constitution allowed Norway to have a measure of autonomy until the nation gained full independence from Sweden in 1905. Independence came without a shot fired.

King Karl Johan, the monarch of Sweden and Norway when the constitution was signed, was initially reluctant to allow constitution-day celebrations until protests changed his mind. His statue still stands outside Norway’s Royal Palace.

The first children’s parades allowed only boys. Girls finally could join in the marches starting in 1899.

“When we celebrate our nation, we do not do so by showing off our military might,” Hansen said. “Rather we do so by showing you our children in whom the future of this country resides. Therefore, this is a happy day even on days like this one when the weather is not happy.”

The celebration has special significance for children in another way. “In fact, on this day, children are usually allowed to eat as many ice creams and hot dogs as they want,” said Centralkirken member Maia Blomhoff Holm.

Like the U.S. constitution, Norway’s document has needed amendment over the years. Hansen noted with shame that the Norwegian constitution initially banned entry to Jesuits and Jews.

In recent years, Norway, and its United Methodist churches, have become home to migrants from around the world. One of the country’s best-known pop acts, Nico & Vinz, are of Ivorian and Ghanaian descent. It’s now possible to see Norwegians of various ethnicities don the traditional bunad.

The Rev. Øyvind Helliesen, a district superintendent in Norway, told United Methodist News Service that the holiday binds an increasingly diverse people together.

“Especially in the last few years when this community has become more multicultural and mixed,” he said, “it has been really important that this is a day for all nationalities and all religions.”