Bishop Grant Hagiya told the 750 church leaders gathered at the Council of Bishops’ Extended Cabinet Summit to lead with courage for the sake of the future of The United Methodist Church.

Hagiya, who leads the California-Pacific Conference, was one of the keynote speakers at a summit that focused on cultivating vital congregations to make disciples of Jesus Christ for the transformation of the world.

The United Methodist Church, as well as many Christian denominations, is facing decline in the United States because for many generations people have stopped caring about institutions, Hagiya said.

“It is not our fault. We didn’t create the environment. But do we have the capacity to adapt and change?” he asked. 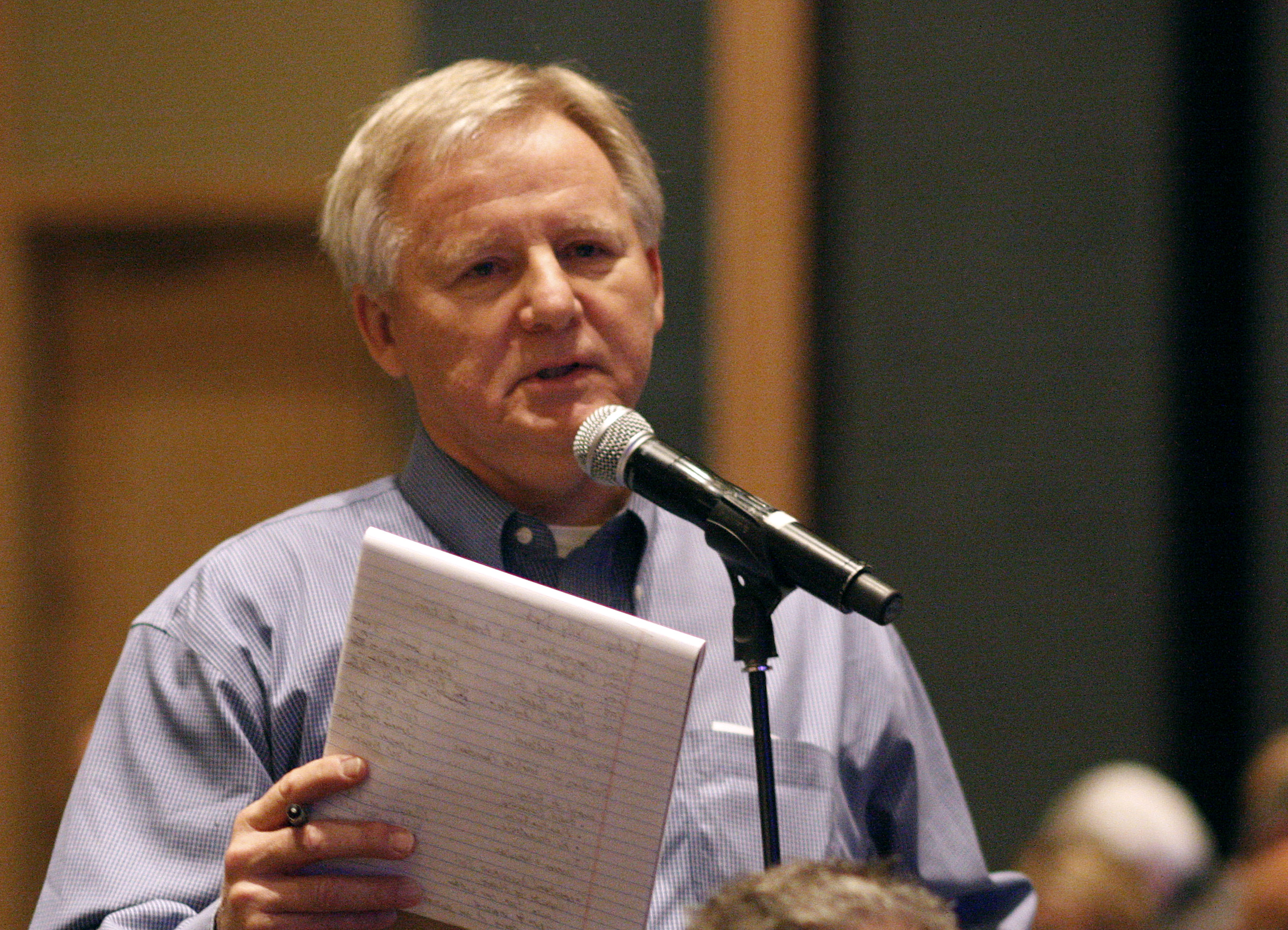 The Rev. Mark Ogren, director of congregational excellence for the Virginia Conference, shares what is happening in his area during the United Methodist Council of Bishops’ Extended Cabinet Summit in Jacksonville, Fla. Photo by Kathy L. Gilbert, UMNS.

“There is a general state of fear and anxiety” in the church, Hagiya said. He added that the debate over homosexuality is “a symptom rather than the cause.”

He said people are “acting out” from fear.

“In the Western Jurisdiction, I got a complaint from a man after the election of Bishop Karen Oliveto against the entire college — all active and retired clergy,” Hagiya said. He talked to the man and explained there was no way to charge everyone. It became clear he just wanted to call attention to the issue, and the charge was dropped, Hagiya said.

It is going to take courage to change the church to attract those outside the doors, he said. “And there will be casualties.”

Fort Worth Area Bishop Mike Lowry, chair of the task force on the Extended Cabinet Summit, said the task force wanted to present an experience done “with faithfulness and fruitfulness in a manner and style that lifted up the best of the Gospel, that was Christ-centered, that was excellent in its presentation and deep in its thinking.”

Bishop Bruce R. Ough, president of the Council of Bishops, said the council began planning and praying for this summit nearly two years ago. “This summit grew out of the council’s commitment, forcefully stated in our 2012 Call to Action, to redirect the resources and energy of the denomination, including our own leadership resource, to increase the number of vital congregations throughout our global connection.”

Similar events are being planned for the conferences in Africa, Asia and Europe, too.

Bishop Ken Carter, who leads the Florida Conference and is president-elect of the Council of Bishops, led the participants through the “Missiology of Vital Congregations.”

“We were once a movement, but over time we have experienced harm. We became rigid and inflexible, and we created a thick Book of Discipline,” he said. “It didn’t allow us to adapt, and what was once a missional movement became an institution.”

Bishops brought example after example of churches that have adapted to change and are creating vital congregations.

New bishops LaTrelle Easterling, Sue Haupert-Johnson and Tracy Malone led a panel discussion about some vital congregations in their conferences.

Haupert-Johnson recommended the Fresh Expression movement that started in England and is all about mission. An initiative of the Church of England and the British Methodist Church, the movement has resulted in the birth of thousands of new communities in the United Kingdom and brought renewal to scores of established churches.

“We are missionaries, not consumers,” said Haupert-Johnson. She said the real mission of the church should be to get out and find the people who are not in church yet. “It (the mission) is heart and soul and one-on-one with those outside the church,” she said.

Haupert-Johnson takes inspiration from the evangelist E. Stanley Jones, who traveled the world to make disciples. “He said some of the loneliest people he met were in bars.”

“So I have become the bishop of hotel bars,” she said. “Come join me.”

The summit paired conferences, and participants said that was eye-opening. Many said they were surprised how much they had in common.

Members of the Louisiana Conference were matched with Mississippi Conference members, and the Rev. Embra Jackson of Mississippi said it was the first time in many years they had talked to their “next-door neighbors.”

“I hope to leave here with good relationships and some good ministries together,” he said. “The best thing I have heard is the hope for the future and moving forward. If we hold steadfast and pray together, God will lead us to the future and good things will happen.”

The Rev. Conrad Link of the Baltimore-Washington Conference was excited by what he heard during the summit on Nov. 5.

Ough ended the summit with words of encouragement. He pointed out the power that was in the room.

“What we carry home and how we lead may determine how we end up,” he said. “Fix your attention on God.

“Aren’t we privileged to lead this great church?”

Gilbert is a multimedia reporter for United Methodist News Service in Nashville, Tennessee. Contact her at 615-742-5400 or [email protected].