That was the day her 19-year-old son Brandon was killed when the truck he was driving in an Army convoy in Afghanistan struck an IED, an improvised explosive device. At his funeral, a woman slipped a card in her hand about the American Gold Star Mothers Organization for mothers who have lost a child in the war.

She didn't know on that day how much it would help her to be part of a community that really did understand her grief.

First United Methodist Church of Lancaster, Pa., was also a source of support and comfort in those difficult first days and years.

"The night we found out Brandon was killed &ellipsis the minister from this church, even though we weren't members at the time, called me," she said. The church also opened its doors for Brandon's funeral, and more than 800 people attended.

"They just showed us Christ's love through their actions," she said.

Three years later, when Veterans Day landed on a Sunday, Styer wanted to share her pride in her son with her church family. The Rev. J. William Lentz Jr. agreed, and Lou Riedlinger - a veteran of World War II and the Korean War, and the leader of the church's Armed Services Support Ministry - took charge.

Riedlinger, Styer and others in the church started organizing and announced there was to be a large display in the church on Nov. 11 with photos from anyone who was or had been in the military.

During the worship service, the Red Rose Honor Guard performed the ceremony of the folding of the flag and presented it to the Styers.

Karen Senkowski, a part-time church staff member who helped organize the event, said the congregation was asked to submit pictures and stories of themselves or family members in military service. "So, we collected all the stories, typed them up and we put them up for display today," she said.

First United Methodist Church was founded in 1803, so it has a long history of ministering to veterans who served the military dating back to the Revolutionary War, Riedlinger said. People brought in 84 photos that represented veterans from the Civil War to the Afghanistan war.

Riedlinger said they gathered several hundred thank-you notes. Most of the notes will be sent to the veterans hospital in Lebanon, Pa., he said. But many people wrote special notes for a veteran from their community who lost both legs.

"The veterans are happy to get these notes, and they pass them around from one to another. The ones that give them the most smiles and the most joy are the ones from the children, from our Sunday school," Riedlinger said.

'You can't thank them enough' 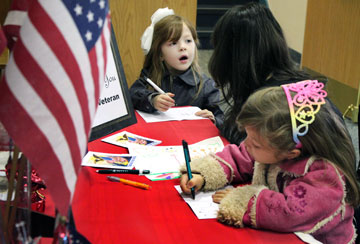 Children at First United Methodist Church of Lancaster, Pa., write thank-you notes to give to wounded veterans and those serving in the military.

Julie Grove, a member of the church with a son deployed to Afghanistan, said the event "means everything to me.

"I think it's a wonderful thing that the church is doing. As a member here, I'm just honored that they would have a special event like this for servicemen. As I was driving in here today, I was thinking: 'You can't do enough; you can't thank them enough for their service.'"

Lentz offered a special prayer of thanks from the pulpit.

"So, it is a day and time for the nation still at war in Afghanistan, to remember that we send our mothers and fathers, our husbands and wives, our sons and daughters, our brothers and sisters, our neighbors and our friends to perhaps put their lives on the line for an ideal, for a hope or for a vision of the future."

"I think it's important to remember Brandon and to not let his memory die because of what he did. He was only 19 years old, but he served his country. He loved his job," Styer said. "He saved many lives of others in his battalion that day.