• Though ill-equipped, with only a single video camera and a radio recorder, Trinity Radio and Television has been on the air for a year.

• Using the three bilingual stations that broadcast in Kikuyu, Maasai and Samburu, the Rev. Josam Kariuki said he has planted five new congregations.

The Rev. Josam Kariuki of Trinity United Methodist Church, Central District, and other clergy began livestreaming worship services and sharing messages of hope during the COVID-19 pandemic. The livestream, however, was only getting to followers who had smartphones.

“A good number of my followers,” he said, “use button phones. Others don’t own mobile phones. I needed to reach them all, especially when they required spiritual, emotional and material support.”

Kariuki decided to start the church’s own radio and television station to reach the most vulnerable communities in slums and the interior areas of Narok with vital information. He created space for the station on the church’s premises.

Though ill-equipped, with only a single video camera and a radio recorder, Trinity Radio and Television has been on the air for a year. Because it is so new, the station is surviving on the goodwill of local churches. Its skeletal staff of eight workers includes six volunteers.

Kariuki is seeking partnerships to help the station remain afloat. Partners could buy video cameras and other equipment or donate solar-powered portable radios and televisions, recorders, transmitters and computers. The pastor is also looking for sponsored programs and media-trained volunteers.

“The sponsored programs and the financial aid,” he said, “will help to train employed staff.” Often, volunteers leave for paid jobs. 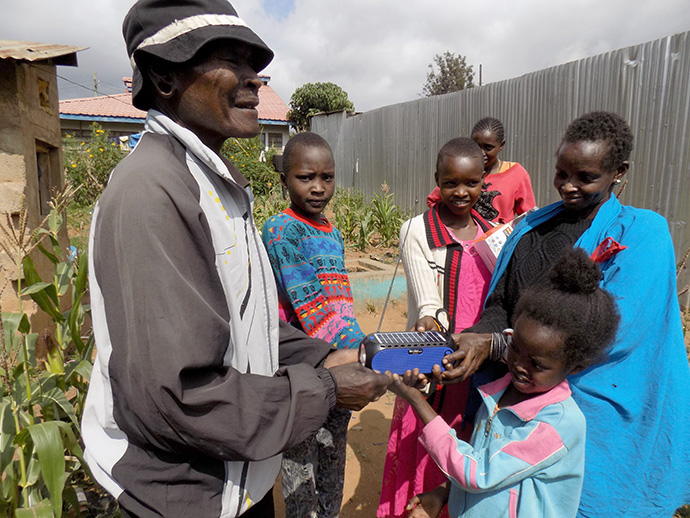 Saloton Ntutu and his family in Narok, Kenya, enjoy listening to Masai songs on Trinity FM. They received the radio as a donation from Trinity United Methodist Church. Photo by Faith Wanjiru, UM News.

Another major challenge for the new station is access to remote areas to collect news.

“This had adverse effects in many slum areas and rural areas of Narok, with a recorded rise in domestic gender-based violence, female genital mutilation, early marriages, teenage pregnancies, child labor and defilements,” he said.

Chief Lesiti Muturo said Trinity Radio and Television instructs the community about their rights and available government resources. Women learn about family planning, the importance of education and other subjects.

After the closure of schools in 2020 because of COVID-19, the church radio station began broadcasting school programs to children in a local language.

Using the three bilingual stations that broadcast in Kikuyu, Maasai and Samburu, Kariuki said he has planted five new congregations.

“We can now preach through the media in our local language,” said Pastor Melisa Soipan of Narok United Methodist Church. “It is impossible to reach our followers through social media like Facebook because there is no internet access.”

Moses Kwaro agreed. “We are proud because we have been remembered and cared for,” he said.

“We are very happy,” leader Tabitha Tumangah said, “because (we) are getting national news in our Maasai language. This is beneficial to our people who do not understand English and Swahili.” She added that the church’s mission team is mobilizing them to have solar-powered radio because their region lacks electricity.

The radio can be listened to worldwide through the Facebook pages Trinity FM Kenya and Trinity TV Kenya and the website https://umckenya.org/tv/. Trinity Radio and Television reaches the Kikuyu, Maasai and Samburu communities.

Wanjiru is communications director for the Central/Narok District of the Kenya-Ethiopia Conference.