"Some of the Pharisees in the crowd said to Jesus, 'Teacher, order your disciples to stop.' Jesus answered, 'I tell you, if these were silent, the stones would shout out.'" - Luke 19:3940 (NRSV)

The United Methodist Church ought not and cannot be silent about race and racism.

The Historical Statement in the United Methodist Book of Discipline provides a history of Methodism's response to race/racism.

We read: "John Wesley was an ardent opponent of slavery. Many of the leaders of early American Methodism shared his hatred of human bondage."

But we also read of the "separation" over slave ownership in 1844 that created the Methodist Church South. That separation ended in 1939 in a "Unification Conference" establishing the racially segregated Central Jurisdiction as a compromise for those who were willing to exchange their pro-slavery attitudes for pro-racial segregation practice.

I cannot be "silent" about my personal experiences of Methodism and race. My preacher father attended the Unification Conference that established the racially segregated Central Jurisdiction in 1939. When I became old enough to talk with him about Methodism, he expressed how hurt and wounded he and other black delegates to that conference were by the establishment of the Central Jurisdiction.

While in college in Greensboro, N.C., I lived with my grandfather who was born near the end of slavery. He shared with me his memories of the slave owners whose name, Caldwell, became our family name. Some of them were Methodists, and my grandfather became an active Methodist, serving as treasurer of St. Matthews Church in Greensboro.

While I lived with him and attended college in Greensboro, I became active in the North Carolina Methodist Student Movement. There were few white churches at that time willing to host meetings of this student movement because of the presence of black persons like myself. 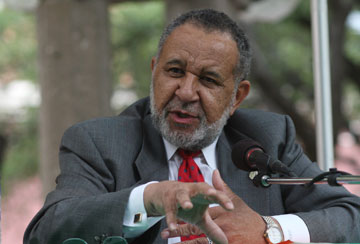 The Rev. Gilbert H. Caldwell answers questions during a panel discussion in Fort Worth, Texas, during the 2008 United Methodist General Conference. A UMNS file photo by Maile Bradfield.

Whenever I told my grandfather that one of my white colleagues in the student movement was going to come by our house to give me a ride, I could tell there was a bit of unease, even fear, in him because his black grandson was going to be riding with a white person, particularly when that white person was female. He knew what had sometimes happened to black persons who were in cars with white persons.

The Methodist Student Movement met regularly at the Methodist Mecca at Lake Junaluska. The other black students and I who attended the meetings were expected to abide by Junaluska's policies of racial segregation: no swimming, segregated housing, etc.

All of the above came to a dramatic conclusion for me when my application to Duke Divinity School was rejected in 1954 because at that time Duke's policy denied admission to Negroes, as we called ourselves. The rejection letter read: "We hope you will find a Seminary to meet your needs." That seminary became Boston University School of Theology.

I share the less-than-positives of Methodist history along with my personal history, not to "accentuate the negative," but in my belief that we cannot celebrate racial progress if we remain silent about the attitudes and actions that precipitated the need for progress.

I contend that our Methodist/United Methodist history - debates about slavery, division because of those debates, a race-compromised Methodist unification through the creation of a segregated all-black Central Jurisdiction in 1939, the emergence of a racially integrated United Methodist Church in 1968 - make for a United Methodist story worth "telling the nation."

We have a story to tell 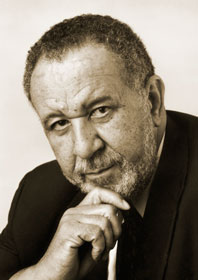 What is it about race in 2012 that cries out for a "word" from The United Methodist Church?

Donald E. Collins concludes his book - "When the Church Bell Rang Racist, The Methodist Church and the Civil Rights Movement in Alabama," Mercer University Press, 1998 - with these words from a written interview with the Rev. Tom Butts, now pastor emeritus of First United Methodist Church of Monroeville, Ala.

Butts says, "We are about as racist as we have ever been, but we are more sophisticated about it, which makes the whole thing more insidious."

The election of our first African-American president has been celebrated as an historic first, but some of the responses to him and his family have gone beyond the traditional political disagreements and critiques that are part and parcel of American politics. As we read, hear and see, some of the racist-tinged expressions that claim to depict President Obama, I resort to the oft-used cliché, "The more things change, the more they remain the same."

Some of the responses to those who immigrate to the United States from south of the U.S. border give little evidence that those who demean the new would-be immigrants remember our national immigrant history.

Imagine a scenario that has the indigenous people who were already here when Europeans and others arrived on these shores saying to them, "Show us your papers." I know they do not intend to do so, but those who seem most upset by undocumented immigrants from Mexico seem to be endorsing through their anti-immigrant fervor these words I first heard many years ago: "If you are white, you are all right; if you are brown, stick around; if you are black, stand back."

The rapidly changing racial demographics of our nation are to be celebrated, not regretted.

America has never been "white America" as some wanted it to be. Today, more than ever, we are "rainbow America" and we know we are better when we rejoice in that reality.

What does the Lord require?

"What doth the Lord require of [The United Methodist Church] in such a time as this?"

The United Methodist Church can publicly speak of our own history regarding slavery as a way to respond to the unawareness, amnesia, revisionism and distortions too often reflected with respect to slavery in our nation.

First, slavery is, the elephant in the living rooms of most Americans that we are afraid to talk about.

But, some recent writings of historians and journalists have identified the fact our first lady, Michelle Obama, has ancestral linkages not only to slaves but also to former slave owners. Because of slavery, some of her distant relatives are white. The United Methodist Church can enable new understanding of why we in the African-American community are so distinctively different in our facial features, our hair texture and in our skin colors. We are living reminders of our national slave history that some would deny.

Second, The United Methodist Church, because of our racial history and our racial present, can explore within the denomination and beyond, how we develop the capacity to determine if negative attitudes and actions are reflective of racism because the participants are of different races. Attitudes and actions may be reflective of racial and cultural differences and nothing more. When something is deemed racist or race-related, is it simply an expression of human and not racial differences? Declaring "racism" when in fact it is not racism is dangerous. But, declaring "no racism" when there is racism is also dangerous.

"It is essential that we who are United Methodists remember our histories as a way of not treating others in the negative ways our ancestors once were treated."

Third, if we use the word "exceptionalism" for both the United States and The United Methodist Church, it is important to understand that to be exceptional is not to have arrived on some pure and perfect mountaintop, but rather to be bold and brave and honest about our history with its regressions and progressions.

Exceptionalism ought be descriptive of our journey and not our arrival. The United Methodist Church in 2012 is not one of the historic "Peace Churches" with regard to war. But, we can be for all to see a "Racial Justice / Racially / Culturally Diverse Church" that takes a lead in healing the divisions of these moments.

The United Methodist Church in the United States is made up of people who have an indigenous history (native-born), immigrant history (migrated from elsewhere) and an imported history (brought by others to the country). Our histories - as different as they may be - are intertwined because they overlap.

Regardless of our resident status in the United States, it is essential that we who are United Methodists remember our histories as a way of not treating others in the negative ways our ancestors once were treated.

We as a denomination cannot be silent about racism. Regardless of whether it is subtle or not-so-subtle, sophisticated or not, it is "insidious." The United Methodist Church has a "story" that can be shared, and, because of our racial history, a ministry opportunity "for such a time as this."

*Caldwell is a retired elder and member of the Rocky Mountain Conference and a member of the board of the African-American Methodist Heritage Center. He now lives in Asbury Park, N.J. Caldwell is a co-creator of Truth in Progress, a project designed to engage people of different races and sexual orientations in a deeper dialogue about issues of race, sexual orientation, and religion. He also is the author of "What Mean These Stones? Lessons of Hurricane Katrina, 9/11, The Million Man March, The Millions More Movement."