Something so mundane had become precious to Pamela Stanich after her 17-year-old son was killed in a deadly school shooting, a family friend said at the teenager's memorial service on May 26.

Jared wore the backpack every day. It was ratty, and a bit grimy, after a long year of Jared cramming it into his locker, and dropping it unceremoniously on the floor of the art room, school cafeteria and gym.

Authorities found the backpack after Jared, seven other students and two substitute teachers died in the mass shooting May 18.

Family friend Hall Hill described how Pamela unzipped the top and reached down inside. Notebooks. Pencils. Pens. But there was more — Jared’s artwork, a sculpture he had created, a Dr. Who DVD.

That was so Jared — smiles and sunshine, a magical, artistic boy who loved his mama, his dogs, and superheroes. A boy who was known for wearing coonskin caps and raising two fingers in the peace sign to everyone he met. 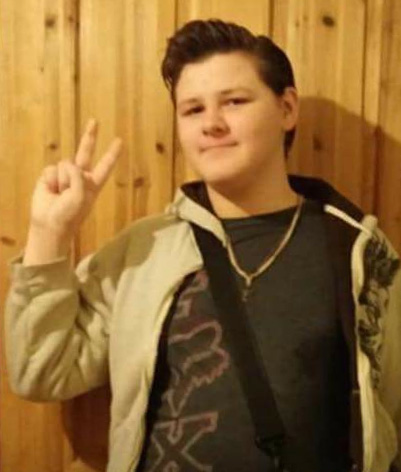 For the service, Pamela wore a red T-shirt she had commissioned. The front of the shirt depicted Jared as an anime character standing proudly, arms crossed over his chest, chin held high. A local artist, Giovanni Rodriguez, had drawn it in honor of her son. The back of the shirt was emblazoned with large, white lettering —“ Team Jared: Santa Fe Strong.”And now he was gone.

When Pamela arrived at Aldersgate United Methodist Church for Jared’s memorial service, she saw countless friends and family members wearing the same T-shirt as they made their way into the church.

The front lawn was covered with American flags fluttering in the breeze for Memorial Day. She clung to her husband, Travis Stanich’s, hand and began the long walk past the other mourners and into the sanctuary.

Then piano music filled the sanctuary as all eyes turned upward to the screen overhead and there, frame by frame, was Pamela’s boy.

Baby Jared, wearing a tiny jean jacket gazed into the camera. The backdrop, a snow scape. It was his first Christmas. Then teen Jared at church, close to his mom’s side in a pew up near the front. Jared, angelic in sleep. Goofing around with friends and family. Flashing the peace sign.

To date, almost $30,000 has been raised, ensuring that Jared’s legacy of light and love lives on.

Those interested in contributing in Jared’s name may do so at the Texas Methodist Foundation, 11709 Boulder Lane, Suite 100, Austin, Texas 78726-1808. Designate the gift in the memo line: The Jared Conard Black Scholarship Fund.

Elementary-age Jared, wearing a Santa hat. Wrapped in his family’s arms. Eating a snow cone. Cuddling his dog. Standing with friends before a banner at church which read, “Devotion. Compassion. Justice.” Holding a stuffed animal. In his Mama’s arms. Carving a pumpkin at Halloween. Hamming it up for the camera with friends while wearing 3-D glasses. Another peace sign, and another, and another…

As the photos flashed by, the sound of weeping in the sanctuary grew louder. The last frame was Jared’s school picture. He smiled sweetly into the camera, his hair combed just so, and raised two fingers…peace.

Hill stepped to the pulpit. “Jared’s love of superheroes was a reflection of his heart,” he said. “Fearlessness. Justice. Defense of the helpless — these are the characteristics Jared wanted for himself, and we know he displayed them in the end.”

Pastor Yohan told the family, “Yes, we are left grieving. We want to hear Jared’s voice again, but we cannot because we are only human. An experience such as this reminds us that we are painfully limited in what we can do. However, we can come to our God and one another to find comfort and strength. We can trust that God, our Great Physician, will heal our hearts as we turn to our neighbors.”

A final song was sung, a final prayer said, and Pamela rose to her feet, grasped her husband’s hand once again, and led the mourners out of the sanctuary, her eyes fixed on the light shed by a boy who believed in peace.