Tashinga Chapatarongo, an 18-year-old pregnant mother, tied two 10-kilogram (22-pound) bags of meal on each side of her body and prepared for the long walk home.

She and about 300 others had come to the Rutuka United Methodist Church for food relief.

Chapatarongo said she had harvested a meagre 20-liter (22-gallon) bucket of maize at the close of the 2015-16 growing season because of drought in Zimbabwe.

“This is a miracle that has just happened and I am out of words. God bless this church,” said Chapatarongo, who walked 10 kilometers, about 6 miles, from her home village of Muzeke to pick up the food relief. 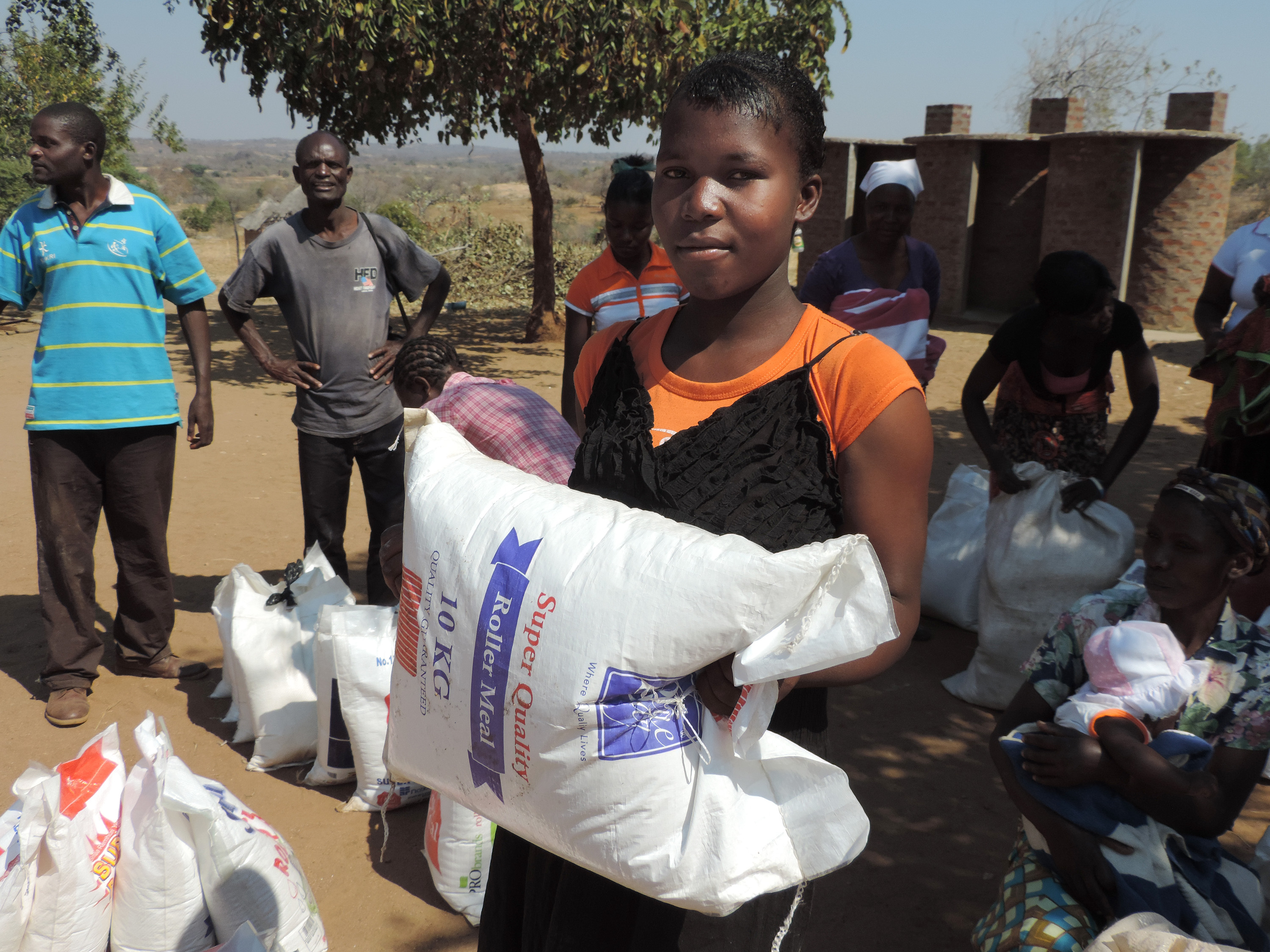 Young children and adults could be seen carrying bags on their heads and or hauling them in ox-drawn carts.

Churches in the Harare West District contributed 15 tons of maize and maize meal to the food bank launched earlier in the year by the Rev. Philip Musharu, the district superintendent, in response to the declared state of emergency due to the devastating effects of the drought.

The Rushinga food distribution was the initial step in assisting disadvantaged communities within the areas served by the district’s churches.

“The drought has not only affected our harvest, but the water situation and livestock. Most boreholes in the Rushinga District have dried up and now many people have to drive their livestock for close to 10 kilometers (6 miles) to get water and the scarce pasture,” said Wilson Jara, the Rushinga District social services officer.

Rushinga is among the areas hardest hit by the drought.

The United Nations Development Program reported in May that up to 4.5 million people, half of Zimbabwe's drought-stricken rural population, will need aid by next March as the agency seeks to plug a funding gap of $290 million for assistance.

The United Methodist Committee on Relief has worked in partnership with the U.N. World Food Program on food security needs in the Kariba District and Uzumba Maramba Pfungwe District, reported UMCOR’s head of mission in Zimbabwe last spring.

The El Nino-induced drought has cut the output of the staple maize crop.

In his address to Parliament last year, Zimbabwe President Robert Mugabe said crop production during the 2014-2015 growing season was hurt by a late start to rains and “its uneven distribution, both consequences of climate change.”

The Zimbabwe government has already started a food program in schools for the children enrolled in early childhood development programs for pre-schoolers or kindergarteners through grade 2.

The United Methodist Church, through its Church and Society Committee, has tried to complement the various efforts of the state and non-governmental organizations.

The Rev. Alan Masimba Gurupira, administrative assistant to Bishop Eben K. Nhiwatiwa, described the intervention by the Harare District as a “welcome gesture and a practical response to the gospel of Jesus Christ.”

“The church cannot simply close their eyes at such disasters and wait for the government to respond,” he said.

But he said more sustainable ways of dealing with dry spells and improving the water supply are needed.

“Some serious reflection has to happen and (we need to) begin thinking about water harvesting techniques, knowledge sharing and climate management,” Gurupira said.

“This is a noble initiative by the church and we feel honored as a community. I pray that this will not be the end but the beginning of good relationships towards alleviating the state of suffering faced by our people.”