Despite the recent collapse of an overall strategy for restructuring, the bureaucracy of The United Methodist Church is changing.

Shrinking boards of directors - in some cases, to tiny proportions - are requiring adjustments in governance and representation for the denomination's agencies and commissions.
Budget constraints dictate a streamlining of priorities and realignment of staffing needs.

Gil Hanke, who chairs the General Secretaries Table, a forum for the church's top staff executives, said its members are working "with renewed interest" on issues perceived to be unresolved and new areas of interaction. "I'm kind of excited about where we are right now," he told United Methodist News Service.

The church's top executives sometimes found themselves on the defensive as the legislation was debated and shaped into Plan UMC.

"There's this narrative that the general agencies continue to grow and grow and grow, that there's this huge bureaucracy, but the truth is that we've gone from 3,100 agency staff to 1,300 over the last 40 years," said Jim Winkler, Board of Church and Society.

Although some agencies submitted their own legislation to reduce the size of their boards of directors, Winkler believes a "mob mentality" prevailed at General Conference over the idea that agency boards had to be shrunk as a cost-cutting measure.

The Board of Church and Society, which retains a 62-member board, already had slashed its meeting costs by 40 percent, he said. "I think we're going to find out we've lost a lot of connections to annual conferences and local churches by having fewer people represented on our boards." 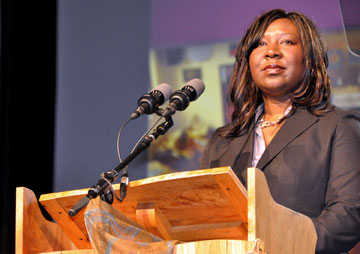 Erin Hawkins of the United Methodist Commission on Religion and Race speaks during the 2012 General Conference. Hawkins believes the church needs to ensure churches "are relevant in communities where there are changing demographics." A UMNS file photo by Skyler E. Nimmons.

Hanke, who leads the Commission on United Methodist Men, observed that the full impact of the board reductions did not become real until jurisdictional conferences made appointments this July. Still, he is pleased with the caliber and diversity of his slightly smaller board of directors.

Erin Hawkins, top executive of the Commission on Religion and Race, said she was disappointed about how the discussion over the need for realignment of the general church was redirected during the course of the legislative meeting.

"What it came down to at General Conference, it seemed, was 'where can we start to cut,' which is really not a conversation about the ministry of the church," she said.

Only 2 cents out of every dollar in the collection plates go to support general church ministries, but when the final denominational budget for the next four years was adopted, the cuts were substantial, particularly for agencies dependent upon World Service funds.

After the Judicial Council declared Plan UMC unconstitutional on the last day of General Conference, some church members were discouraged and angry and others relieved.

In a May 17 letter to his directors, Thomas Kemper, top executive of the Board of Global Ministries, expressed regret that more energy at the top legislative meeting was focused on "rearranging the denominational furniture" than developing vital congregations.

But Kemper also saw an opportunity for the general agencies to take the lead in shaping the denominational future, acting in collaboration to "build productive, unifying approaches to share services and support one another in the interfaces of mission, discipleship, education and social justice."

Hanke is finding that kind of enthusiasm among other agency leaders as well. Cooperation was evident before, he pointed out, but not always apparent to the rest of the church.

"One of the efforts that we, as agencies, are doing is making it more visible," he said. "In addition to that, we can't be satisfied (only) with what we've done in the past."

In the few months since General Conference concluded, for example, members of the General Secretaries Table have discussed sharing services and are evaluating programmatic overlaps to address accusations about the redundancy of agency programs. "We need to look at those perceptions, and if they're the reality, we need to deal with it," Hanke said.

A number of collaborations already are in the works, including:

The Rev. Karen Greenwaldt, top executive, Board of Discipleship, stressed that her agency welcomes "any new vision of the general church that reduces the perceived distance between general agencies, annual conferences and local churches in order to increase the making of disciples of Jesus Christ."

To get its message across, The United Methodist Church not only must deal with the issue of how it is organized, but also how to reach the public across a changing media landscape, said the Rev. Larry Hollon, top executive of United Methodist Communications. 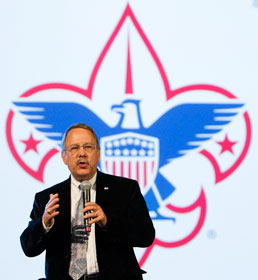 Gil Hanke speaks about scouting ministries during the 2012 General Conference. Hanke, who chairs the General Secretaries Table, said he is excited about renewed cooperation among the denomination's top agency staff leaders. A UMNS file photo by Mike DuBose.

Because the mainline denominations, as a whole, "have lost their voice in public conversation and in cultural influence," Hollon said, the denomination's willingness to be highly visible in the public media is theologically important. Cooperation among different parts of the church is key to that visibility.

He cited The United Methodist Church's full-page ads in the Denver and Aurora newspapers, as an example. The ad reminds people that a loving and all-embracing God stands with them in a time of tragedy.

The spirit of collaboration is a benefit of the denomination's hallmark connectional system. However, the general agencies must work harder than ever to stay connected, Winkler said, because the days of church members being "Methodist-born, Methodist-bred and, when you die, Methodist-dead" are over.

"In local churches, we're virtually a refugee center for former Catholics and Southern Baptists," he added. "And they don't know the denomination that well."

Neither do some of the neighborhoods in which United Methodist congregations are found, Hawkins pointed out.
"Our need is for congregations that are relevant in communities where there are changing demographics," she said. "That piece alone has the potential to make or break the future of the church."