In the late 1960s, an Oklahoma businessman went to his pastor desperate for help.

"My wife was an alcoholic," said Jack Turner. "Nearly every week, Vicky was drunk, sometimes for three days at a time. I was worried about her and our three little boys - the oldest was just 8."

Turner said he knew he needed to talk to someone who cared and could point him toward help.

"I had high respect for my pastor," Turner added. "His sermons were always helpful. I made an appointment, went to his office and told him my situation. Right away, I could tell he didn't know how to help me. I left his office very disappointed."

Since he could not find help at his church, Turner looked elsewhere. His search led him to an upstairs room in an Oklahoma City business district, where a 12-step group had its meetings.

"A couple of guys were sitting at a table drinking coffee," Turner remembered. "I told them I had a problem and needed help. They invited me to sit down with them and gave me a cup of coffee. When I left those guys, I had an AA packet in my hand and hope in my heart." 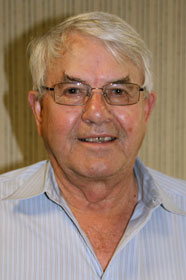 Jack Turner says God used his family's experiences with alcoholism "to lay out a trail for me to follow." A UMNS photo by Boyce Bowdon.

Turner said his visit gave him what he needed to introduce his wife to a 12-step program. She joined a group and, eventually, found sobriety.

Relieved that his wife was in recovery, Turner did not forget the trauma he and his family had experienced because of her addiction. He also did not forget that many of his relatives and friends were suffering because they could not stop drinking. He wanted to help them and others.

"I knew Christ calls us to heal the sick, and I knew alcoholics are sick. But I also knew that many churches didn't want alcoholics around, and many ministers didn't know how to help them," Turner said.

"I had a passion for helping churches minister to alcoholics. I believed God was giving me that passion. So I asked God to lay out a trail for me to follow that would enable me to find opportunities for training in chemical-dependency ministry that I could make available for pastors and other church leaders."

God laid out that trail, Turner said. The trail led Turner to several outstanding training programs. One stood above the rest: Johnson Institute Summer School on Chemical Dependency in Minnesota.

Turner enrolled in the two-week intensive training and experiential school designed to educate professionals in the diagnoses and treatment of chemical dependency. He was pleased that medical doctors, psychotherapists and other professionals, who were knowledgeable about addictions and recognized the vital role spiritual care plays in healing, led the school.

About 500 clergy and lay people have graduated from the Oklahoma Conference Summer School on Chemical Dependency. Here is what a few of those graduates had to say:

Robert "Bob" Langston, a 1989 graduate, attended the school because he felt the pastoral care part of his ministry was lacking.

"Throughout my ministry, (the school) has enabled me to help individuals and families work through health issues and deal with other problems. I know the school helped me become a happier and better person, and I've seen it help countless other pastors and lay people."

Tiffany Smith, pastor of the Grandfield-Randlett churches in southwest Oklahoma, is a graduate of the 2012 Summer School.

Smith said she is eager to share ideas and insights her congregations might use to prevent chemical dependency and to be more helpful to addicted persons and their families. She plans a sermon series showing how the 12 steps are biblically based and how they can help anyone who is addicted to anything.

"All of us are addicted to something that can keep us from being our best," she said.

Richard Pierson, a 1990 graduate, said the Summer School helped him find his life's calling. After earning a master's degree in psychology and counseling, he became a licensed alcohol and drug counselor. Pierson is now executive director of the Oklahoma State Board of Licensed Alcohol and Drug Counselors.

"To this day, the training I received at the Summer School was some of the best I have ever received," he said.

In 1978, convinced that Oklahoma ministers could find valuable help at Johnson Institute, Turner provided scholarships for 16 pastors to attend the summer training.

The pastors came back eager to help chemically dependent people find sobriety. Word got around. Numerous people - church members and others - attended them and found support.

In 1982, several ministers who attended Johnson Institute led the Oklahoma Annual (regional) Conference in establishing the Summer School on Chemical Dependency, based on the Johnson Institute model. Clergy from across Oklahoma came, gained new insights and went back to their churches better prepared to minister to alcoholics in their congregations and communities.

"What those ministers began in 1982 was the beginning of our Oklahoma Conference Summer School on Chemical Dependency," said Annette Harper, who directs the school. "This year, we are celebrating our 30th anniversary."

Harper said the Summer School has gained international recognition for its excellence in addiction awareness and education for clergy and laity.

"Georgia, Kansas, North Carolina and several other conferences have used our school as a model," Harper said. "Several (United Methodist) conferences in other countries have sent representatives to our school and adapted it to meet their needs."

Last year, two ministers from Norway attended the school. In April 2012, they led a regional chemical dependency training school modeled after the one in Oklahoma. Twenty-five people attended. Participants came from Denmark, Finland, Sweden and Norway.

Jack Turner - now semi-retired - said he is pleased to have been one of the many persons who contributed to the Summer School's development.

"God used my family's experiences," he said, "to lay out a trail for me to follow, and I'm so grateful it has led to our churches becoming more effective agents of God's healing."

*Bowdon is a retired communicator for the Oklahoma Annual (regional) Conference and editor of the conference newspaper.