With his salary of $140.15 a month, he’s trying to support his elderly parents and put a daughter through school in Ghana.

Aboua, 51, describes his finances as a major concern, along with lack of equipment (he has no computer) and insufficient training for himself and his colleagues.

“With all this, I know God is with me,” said Aboua, who like other United Methodist lay pastors in his country does not use the title “Reverend.” “As for the difficulties, we are human beings. Until we have finished walking, we continue to swing the arms.”

Just as licensed local pastors are vital to The United Methodist Church in the United States, local or lay pastors play a key role in the central conferences, including areas like Africa and the Philippines where the denomination is growing.

The challenges they face are large. But that they continue to “swing the arms” is appreciated by those who know their work, including Bishop Rodolfo Alfonso Juan.

“There’s a high percentage of local pastors who are achieving well,” Juan said of those in the Philippines’ Manila Episcopal Area, which he oversees. “I’m very happy because most of them are young.” 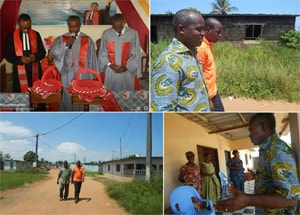 Ordained elders — who have formal theological training, tend to lead larger churches and are eligible to be district superintendents and bishops — can be found all over the central conferences. But local or lay pastors (the latter term is used in Côte d’Ivoire and other parts of Africa) are common as well, numbering in the thousands.

Getting exact numbers is something that has eluded even the denomination’s General Council on Finance and Administration. The agency collects data on pastors, but because of reporting irregularities and confusion over terminology and reporting forms, doesn’t consider its results particularly reliable.

Bishop Ciriaco Q. Francisco of the Philippines’ Davao Episcopal Area said by email that he oversees 141 elders and 89 local pastors.

“Churches in the Philippines avail themselves of the services of local pastors because elders are not sufficient (in number) to supply appointment,” he said.

In Malawi, there are 22 United Methodist local pastors and just four ordained elders, said Klaus Schmiegel, a teaching missionary for the denomination there.

The situation is flipped in the Germany Episcopal Area, which has 240 elders and only 27 local pastors.

But the latter are valued there, said Bishop Rosemarie Wenner.

“There is not a specific type of congregation where we appoint them to serve,” she said. “We carefully seek to look at gifts and graces, as well as at the needs of congregations, and we seek to build networks for mutual support between the pastors in a certain area.”

Training for clergy in the central conferences, particularly in Africa, is a major need recognized by the 2012 General Conference, which approved creation of a Central Conference Theological Education Fund with a $5 million budget over four years.

That money has gone to a wide range of locations and programs, including providing e-readers with theological texts to seminary students and pastors in areas where printed materials are scarce.

Training for lay pastors varies considerably in Africa, leaders say, depending on how long The United Methodist Church has been established there and the proximity of seminaries and Bible colleges.

In Tanzania, a relatively new area for the denomination, lay pastors tend to be those who as members of a specific congregation showed the desire and ability to be a church leader. They gradually work through screening at the district and conference level.

“The quality of that varies based on the DS,” said the Rev. Eric Soard, a United Methodist Board of Global Ministries missionary there.

Soard added that in Tanzania the educational challenges in general are large. For lay pastors in particular, there’s the added problem that many come from another denominational background and don’t know Wesleyan theology.

Finding written materials in their language that can help teach them that theology isn’t easy.

“We’re currently working on creating a Course of Study in Swahili,” Soard said.

The denomination has made progress in translating Course of Study — the training program for local pastors in the United States — into other languages, but needs to do still more, said the Rev. Rena Yocom, who retired last year as executive for clergy formation and theological education at the denomination’s Board of Higher Education and Ministry.

“It is vitally important. You’ve got to give it to people in their own language,” she said.

Conditions in the field

In the Philippines’ Davao Episcopal Area, most local pastors are able to focus on church work and are committed to moving up the clergy ladder.

“Some, because of age and educational qualifications, are not qualified to be promoted, but the goal of every local pastor is to become an ordained elder,” said Bishop Ciriaco Q. Francisco, who oversees that area.

But in Tanzania, lay pastors usually have to give their non-church time to scraping out a living from the land. Almost all are farmers, Soard said.

Lay pastors’ pay varies considerably across the central conferences, as it does in the United States. But lay pastors can’t count on compensation in Tanzania.

“The churches contribute something to them as they can, but there’s nothing guaranteed,” Soard said. “I would say the majority of them are working pretty much for free.”

The Rev. Wes Magruder served as a Global Ministries missionary in Cameroon from 2004 to 2008, and said money was available to pay lay pastors who led one or more churches there. It was enough to attract pastors from other denominations to The United Methodist Church, he said, but not enough to provide real economic security.

“They either farmed or had their own little ventures here and there,” said Magruder, now pastor of Kessler Park United Methodist Church in Dallas. “They were constantly begging us to raise the stipend.”

The Rev. Sidney Cooper, an elder in the Sierra Leone Conference currently teaching in Zambia, said lay pastors “make the church visible in the community” and sometimes exceed elders in commitment.

But he noted that his own conference struggles to meet its financial obligations to lay pastors, though some live in extreme poverty.

“If they are given something to take care of their basic needs, the ministry will flourish,” Cooper said.

In a long interview about his life as a lay pastor in Côte d’Ivoire, Aboua spoke candidly but only briefly about hardships. Mostly he talked about his faith journey and call to ministry.

He underwent a conversion as a young man, worked his way up through local church leadership and ultimately abandoned secular work (and good pay by Côte d’Ivoire standards) to focus on ministry as a lay pastor.

Along the way, things have happened that he is sure are miracles, such as the time he survived falling asleep while driving one night, or the flood that damaged so much in his home but spared all papers dealing with his religious life.

Feeling God has directed him into ministry through those acts and others, Aboua welcomes the six- and sometimes seven-day work weeks, which include leading Bible studies and catechism classes, leading training for Class Meeting leaders, visiting people in their homes for prayer, attending church council and district superintendent meetings, and of course Sunday worship.

It’s a rigorous, often difficult life; but one that affords deep satisfaction.

“I feel the joy of serving the Lord, doing the work of God and seeing lives changed,” Aboua said.