Growing up in the Midwest, Joyce D. Sohl learned several important lessons: Think for yourself. Accept all. Always try to do your best. Prepare to be able to support yourself.

Those values would serve her well later in life as a pioneer for women’s ministries in The United Methodist Church.

Sohl is grateful that her mom, Nellie Wichelt, was more progressive than some other parents of her day. Early on, her mother advocated neutral pronouns for God — a practice that gained more acceptance years later.

“Mother was a Christian educator,” she said. “She taught me that God as ‘father’ might not be a good image for all children and adults.”

A love of math and chemistry led Sohl to Westmar College in LeMars, Iowa.

While earning her bachelor’s degree, Sohl was on the national youth board of the EUB Church. She next headed to the University of Nebraska for graduate courses in math and secondary education. Sohl taught junior and senior high math in Lincoln until 1964, and moved to Colorado Springs in 1967.

By the time The United Methodist Church was birthed from the union of the EUB and the Methodist churches in 1968, Sohl already was involved in the work that would shape her life. After serving on the EUB Women’s Council and Board of Missions for two years, she segued into similar roles in the newly created denomination.

At the 1976 General Conference, she represented the Rocky Mountain Conference as a delegate. She also was on the National Council of Churches governing board.

That same year, Sohl moved to New York to become treasurer of the Women’s Division. That motivated her to go back to school — this time, Fordham University in Bronx, New York, where she earned an MBA in financial management.

Transitioning to deputy general secretary in 1991, she helped shepherd the Women’s Division into becoming United Methodist Women, a separate, autonomous agency of the church.

“We had consultations with women around the world regarding their relationships with and expectations of the Women’s Division and United Methodist Women,” Sohl said. “This laid the groundwork for moving out of Global Ministries.”

During her 28 years with United Methodist Women, Sohl encouraged the agency’s diversity in staff and membership, especially in terms of age and race. She addressed difficult issues such as racism, abortion, sexuality and wide-ranging political perspectives.

“United Methodist Women provides opportunities for spiritual development, education regarding God’s work in the world, channels for social action, and training for leadership in church and society,” she said. 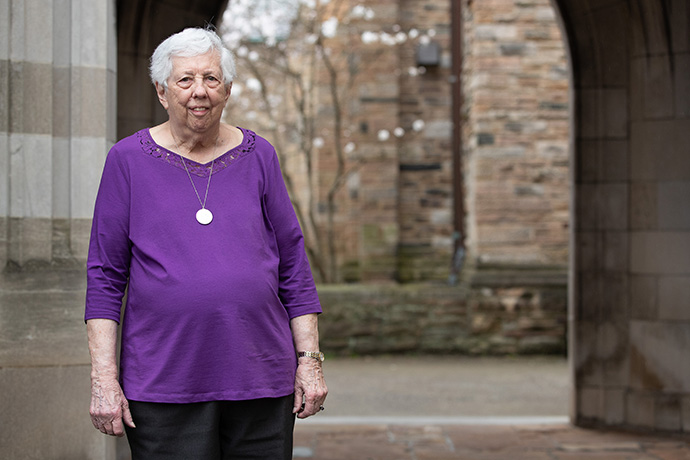 Joyce D. Sohl, a trailblazer for women’s ministries, will leave her position at Scarritt Bennett Center in Nashville, Tenn., in late April, when she moves to Arkansas. Photo by Mike DuBose, UM News.

In 1988, United Methodist Women repurchased the property that housed the Scarritt College for Christian Workers in Nashville, Tennessee. Today, Scarritt Bennett Center is a popular site for nonprofit conferences, retreats and educational offerings. Its mission is to create space where individuals and groups engage one another to achieve a more just world.

Sohl retired from United Methodist Women in 2004 and five years later became the first volunteer laywoman-in-residence at Scarritt Bennett Center. Clearly, she had found her niche.

She coordinates Soul Work, which she describes as “a spiritual enrichment program that includes opportunities for worship; retreats; art as a means of spiritual activity in music, visual art, literature through concerts, art exhibits, book clubs, writing and creative workshops; and interfaith work through the United Religions Initiative.”

The center’s beautiful campus, with its Gothic Revival buildings, invites reflection and renewal.

Tuesdays in the Chapel draws interdenominational laity and clergy to share a message and gather for a weekly half hour of preaching, prayer, music and Scripture.

Vespers & All that Jazz is a Sunday evening “worship experience using words and music from a variety of sources to encounter the sacred,” Sohl said. “We understand jazz to be a process of making music that shapes the service and helps us experience the interruptive Spirit of God in ourselves and others.”

Once a month, a featured poet stops by for an hourlong Poet’s Corner. Presenters and content are diverse. “We get new readers each year,” Sohl said.

One of Sohl’s many colleagues is Steve Lindsey, music director at Edgehill United Methodist Church and accompanist for Tuesdays in the Chapel and the Upper Room Chapel.

“One of the greatest joys of the last decade of my musical and spiritual journey,” he said, “is to have shared parts of the journey with Joyce, freely sharing her incredible life experiences and wisdom, always ready with words of encouragement and support. I consider Joyce a friend and mentor, at whose feet I’ve been blessed to learn.”

What feeds Sohl’s soul? “Opportunities to be creative in worship, good music and putting ideas into action,” she said.

Curling up with a compelling mystery is another favorite. The widow of Lowell H. Sohl, mother of two sons and grandmother of four is a member of Edgehill United Methodist Church, where she has chaired the worship committee.

In late April, Sohl begins a new chapter in her life as she moves to Arkansas. But she leaves unforgettable memories.

“Joyce tells it like it is,” said deaconess Garlinda Burton, interim top executive of the Commission on Religion and Race, “and she never misses an opportunity to remind church women how much power God has given us and of our call to use that power.

Burton recalled a presentation when Sohl talked about how much United Methodist Women contribute to mission and ministries of empowerment and holy self-determination for women and girls.

“She said, ‘Our resources are changing lives around the world. We are a movement, not just a women's club!’

“That's always stuck with me,” Burton continued. “Every time I see Joyce, I think, ‘I'm part of a doggone movement that is already transforming the world!’ And it causes me to stand taller and do more to please God!”

Dunlap-Berg is a freelance writer based in Carbondale, Illinois.

More than 3,000 gathered at the Orange County Convention Center and online for United Women in Faith’s Assembly 2022, held May 20-22. The event celebrating the work of the church’s women’s organization included speakers, worship and the consecration of deaconesses and home missioners.
Social Concerns