“Allowing people who have absolutely no claim of right to our Pa Loko property to have portions of the land for their personal use is not only unacceptable but a denial of justice for the United Methodist Church," the bishop said after his meeting with the president.

He said the president told him the government would “do everything possible to resolve this crisis as amicably as possible in the interest of peace and stability in the country."

Lansana Kamara, who has lived on the property as caretaker since 1972, said he and his family were attacked when he refused the order to leave. The property is the proposed site of the United Methodist University.

“If I had to leave, it would be The United Methodist Church that would ask me to; not the irate deadly looking men I saw that morning,” he said.

Kamara estimated that up to 100 people carrying machetes, broad knives (pangas), daggers and other weapons raided their homes around 6 a.m. on May 26.

His son, John Kamara, said he suspects a neighboring community that had claimed the land but recently lost a court dispute with the conference was behind the attack.  Sierra Leone’s Supreme Court in 2017 ruled in favor of conference ownership of the land, finding there was not enough evidence that the plaintiffs in the court case owned the land. 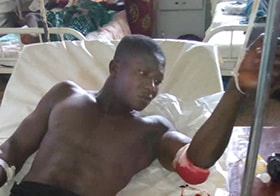 John Kamara rests at Connaught Hospital in Freetown after he and other members of his family were attacked at their home. Photo by Sayo Koroma.

Lansana Kamara said the attackers overpowered him and chopped off his left ring finger with a machete. He sustained injuries to his head and his other hand and said he can’t use either hand as both are badly lacerated.

The father of 16 said he and his family have farmed the land as caretakers for years.

Kamara and his two sons, 25-year-old John and 15-year-old Mohamed, were all hospitalized.

Others were beaten by the mob, but Kamara and his two sons suffered the most serious injuries. Lansana Kamara and John L. Kamara were rushed to the main Freetown Government Connaught Hospital, while Mohamed Kamara and two others were treated at the Waterloo Government Hospital in the Pa Loko neighborhood.

Police have made a few arrests but the ringleaders of the attack fled, said Sayo Koroma. Koroma, who lives in the Pa Loko community, has been talking with police about their investigation.

John Kamara said the men chased the family with machetes as they tried to get their children to safety.

“They destroyed our plants, they went to the piggery and butchered our pigs and carted away with our belongings. They even took away our farm tools. About five of us were wounded but three of us suffered severe injuries,” he said.

Lansana Kamara said the attackers told them the land didn’t belong to them.

“I am a farmer and used to working with tools on my farm. I am not sure I’ll be able to work with this hand again for a long time to come,” he said.

New program prepares students in Sierra Leone to retake high school exit exams so they can qualify to enroll at universities.
General Church

Sierra Leone, Michigan conferences will soon decide whether to put separation plan for The United Methodist Church on the agenda at the 2020 General Conference.
Social Concerns

Even as United Methodists and the Masantigie community signed a resolution, the Ministry of Lands issued a stern warning about keeping the peace.