The world can break your heart on the most ordinary day of your life.

It happened to the Rev. Gregory S. Clapper on a hot July day in 1989 as he was driving his family to a mall in Sioux City, Iowa, to see the movie "Peter Pan." As he was parking the car, he noticed a large plane flying low, heading for a local airport.

A few moments later, a thick black line of smoke rose from the direction of the airport. Clapper got back in his car, turned on the radio and heard the first reports that United Airlines Flight 232 had crashed.

Clapper, recently commissioned as a chaplain for the Air National Guard, was a "baby" chaplain - he had not attended chaplain school yet - but he knew where God wanted him to be.

He was on the tragic scene moments after it happened. He walked among the bodies, comforted the injured and tried to help survivors come to terms with what had just happened.

Today, Clapper is professor of philosophy and religion at the United Methodist-related University of Indianapolis and the author of "When the World Breaks Your Heart: Spiritual Ways of Living with Tragedy."

He was one of the featured speakers at the first United Methodist convocation for police, fire and crisis-responder chaplains sponsored by the denomination's Board of Higher Education and Ministry. The event focused on clergy who volunteer as crisis-care responders.

The purpose of the event was to care for the caregivers, said the Rev. Bruce Fenner, director of the division that endorses United Methodist chaplains. Many times the chaplains are volunteering their service in addition to the ministry in which they are assigned and appointed.

The event was attended by 40 chaplains; speakers included professionals who have experience in crisis ministry. 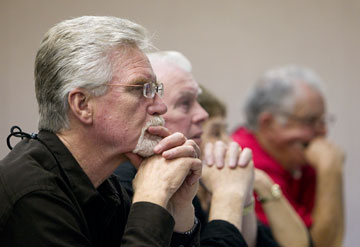 The Rev. Jim DuFriend (left) and fellow chaplains listen intently to a presentation during the United Methodist Convocation for Police, Fire and Crisis Responder Chaplains at the Scarritt Bennett Center in Nashville, Tenn.

"Every day traumatic events (large and small) transpire in communities across our country. Amongst the emergency responders and often unnoticed, are police, fire and crisis responder chaplains who volunteer to serve and minister in the midst of chaos and brokenness," Fenner said."Their presence and compassion is not only invaluable to the professionals they serve, but (also to) the men, women and children who are the beneficiaries of their service."

Clapper and other speakers talked about the mystery of tragedy, the lingering question of "Why?"

The Rev. Michael Comer, an endorsed chaplain and psychologist, coordinates stress management with people such as police and fire agencies involved in traumatic incidents.

He told the story of a police officer he worked with who was called to the scene of a teenager with a gun. He arrived just as the young man shot himself. Comer had also been called to the scene and saw the officer put his finger in the bullet hole in an attempt to stop the bleeding.

The officer finished his shift, worked the next night, then called his supervisor to say he was feeling sick. "That was the last shift he ever worked as a police officer," Comer said.

Comer said there were probably many reasons the officer reacted the way he did, but often times people feel there was something they could have done that would have prevented the tragedy.

Clapper said the pilot of United Airways Flight 232 did a remarkable job in bringing the plane into the airport yet he heard him questioning, wondering, if he could have done something different.

Conduit for the Spirit

Comer told the chaplains that as clergy responding to terrible events, they "become Christ to someone else ... a conduit for the Holy Spirit."

But he warned that the cost of caring can be high, saying that he has changed a great deal because of his work as a chaplain. "I used to believe the world was basically fair and people were good. Now I believe fate is fickle and don't trust anyone."

The Rev. Gregory S. Clapper in his book "When the World Breaks Your Heart" offers spiritual resources broken down by chapters for people struggling with the aftermath of tragedy.

He urged the chaplains to find something good, something kind, to balance the difficult situations they face.

The Rev. Gretchen Hulse, a police chaplain in Pittsburgh, said she copes by talking with friends who are chaplains and understand what she faces, as well as engaging in a lot of physical activity and meditation.

The Rev. Anna Bell of Coolidge, Ariz., a volunteer chaplain with the Arizona Highway Patrol, agreed that gatherings of other chaplains are crucial.

"Part of what's really good about this meeting is that we're together to hold one another up," Bell said. She said the Arizona chaplains get together regularly because no one in their local church can really understand what they face in responding to trauma.

Clapper wrote in his book one of the lessons he learned after the plane crash was "our personal histories are the lenses that bring the present into focus.

"We worship a God who gives us freedom to do things that maybe God doesn't approve of," Clapper said. But in final reflection he has learned, "even in tragedy, God is here."

* Gilbert is a multimedia reporter for the young adult content team at United Methodist Communications, Nashville, Tenn. Brown is associate editor and writer, Office of Interpretation, United Methodist Board of Higher Education and Ministry.