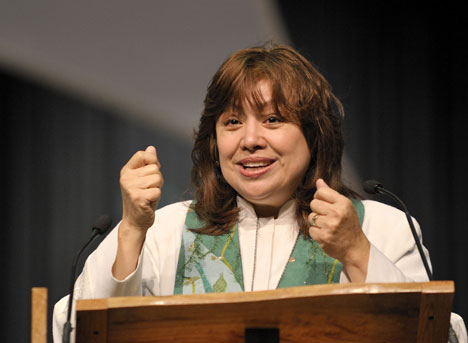 United Methodist Bishop Minerva Carcaño of the church's Phoenix Area preaches during morning worship on April 27 at the 2008 General Conference. A UMNS photo by Paul Jeffrey.

The church must be empowered by a "hope beyond ourselves" if it is going to eliminate poverty, a United Methodist bishop told the denomination's top legislative body.

That hope comes only through faith in Jesus Christ, said Bishop Minerva Carcaño of the church's Phoenix Area during the April 27 worship service at General Conference. The United Methodist Church has declared ministry with the poor as one of its four areas of focus for the immediate future.

Using the Gospel story of the Gerasene demoniac named Legion, found in Mark 5:1-20, Carcaño drew parallels to many in today's world who are sentenced to dwell in a wasteland, as the Gerasene who lived in the community cemetery.

"Where I live," said the bishop of the Desert Southwest Annual (regional) Conference, "a desert swallows up men, women and children every year." Her conference encompasses Arizona and part of Nevada.

She called these immigrants — struggling to cross the desert from Mexico to the United States — modern-day Legions. Most people would consider them to be lost causes.

"Jesus is not an American, German, Filipino, Liberian or even Nazarene. Nor is Jesus beholden to U.S. immigration policies or the policies of any nation." — Bishop Minerva Carcaño

In appealing for a change in approach to immigration in the United States and abroad, Carcaño said, "Jesus is not an American, German, Filipino, Liberian or even Nazarene. Nor is Jesus beholden to U.S. immigration policies or the policies of any nation." Her statement was met by enthusiastic applause throughout the arena.

The roots of poverty

Carcaño widened the scope of those stranded in the Gerasene cemetery to the hundreds of thousands of refugees suffering a "legion of torments."

"Poverty affects too many of our brothers and sisters," she continued, pointing to the "economic machine" and cultural understandings that root people in poverty.

"I cannot preach from this pulpit made from a tree that fell in Hurricane Katrina without speaking of the needs of those affected," Carcaño proclaimed, noting that institutional racism left people vulnerable and racism slowed the response to the hurricane's devastation. The pulpit at the General Conference is made of wood from the grounds of the Gulfside Assembly, a United Methodist retreat at Waveland, Miss., much of which was destroyed by the 2005 hurricane.

Racism and classism are not limited to the United States but are factors in global poverty, the bishop continued. "As United Methodists, we have committed to overcome poverty in community with the poor," she said. "I'm not so sure." Is this a reachable goal? "I do not lose hope."

Her reservation about the focus on poverty concerns fear. She said there is fear of the enormity of the task, of being overwhelmed, of losing identity as a church and of "the Legions of the world."

"Grow up," the preacher said in response to these fears. "Let us grow up and quit hiding behind fear."

Carcaño said the church needs to confess that it may be complicit in poverty, that many U.S. members may have more than they deserve and are not faithful in using their resources wisely. Faith and confession, she said, will lead to freedom from fear.

With the song "The Whole World in God's Hands" playing in the background, worship closed with a slideshow of people considered the Legions of today-people stuck in grinding poverty and those who are ministering to them.

*Scott is the communications director of the United Methodist Committee on Relief.

Welcoming the Migrant to the U.S.

Sermon Text: A Hope beyond Ourselves