An hour's drive separates the quiet refuge of Camp Corail - among Haiti's largest tent cities - from the clutter and clatter of the dusty, garbage-strewn streets of the capital city.

The population in and around the camp is about 10,000, with the thousands living in the planned settlement of hurricane-proof white tents joined by thousands more in makeshift shelters along the perimeter.

Nine pastel green and blue schoolrooms built by the United Methodist Committee on Relief's nongovernmental organization -one of several agencies providing day-to-day essential services - stand out in the sea of white. "UMCOR" is spray-painted in red next to the front doors.

An anchor in the storm

This tent city offers a cleaner, more substantial home than the filthy tattered tents thrust into every corner of Port-au- Prince. But with no grocery stores, churches, restaurants or other urban conveniences, the camp is also isolated and sterile.

Since it is difficult and costly for tent-city residents to get to Port-Au-Prince for food and water, relief workers bring those items - as well as services like security protection and latrines - to this camp, just a few kilometers north of the capital city.

The UMCOR-built schoolrooms have wheelchair access and capacity for 50 students. By dividing the free schooling into two half-day sessions, there are enough rooms to accommodate about 900 students. 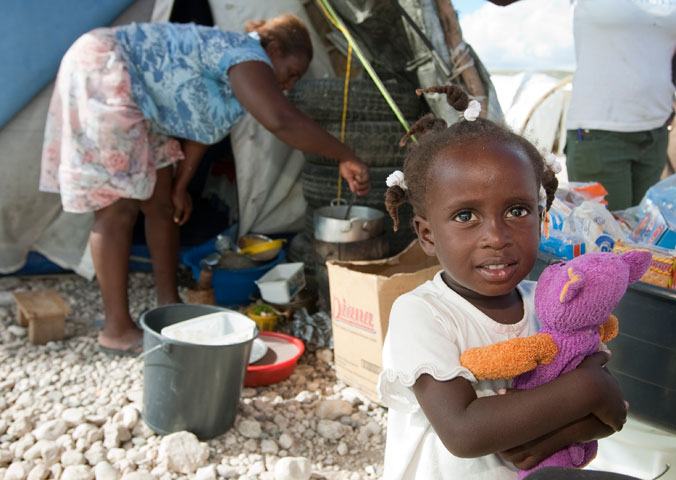 Jeandline, 2, plays with a doll while her mother, Jean Marise, prepares dinner in front of their tent at Camp Corail.

"UMCOR is also supplying school materials, benches, desks and chairs," said Josny Mehu, a program officer for UMCOR-Haiti. The management of the schools will be turned over to the Haitian government.

A Haitian national, Mehu worked with the former UMCOR Haiti office before it closed in 2008. When the office reopened after the 2010 earthquake, he reenlisted.

Not only are the needs of the students are tended to, but so are the fears. Each building has been designed, tested and constructed to withstand a Category 2 hurricane, Mehu said. The schools are among the most secure structures in the camp, with features such as 30-degree roof pitch, hurricane strapping, reinforced trusses and half-inch plywood construction throughout.

"When Tropical Storm Tomas hit the island in early November, residents sought shelter in the schoolhouse," Mehu said. "The buildings were not damaged and everyone was safe."

The camp and the school fill a desperate need. The 2010 earthquake damaged or destroyed 4,500 schools in the Port-au-Prince area, according to an initial survey by the Ministry of Education. As of September, about 1,000 schools still required debris clearance.

Despite the harsh reality of being a home for refugees from the massive human disaster, the camp is not without beauty. White-capped mountains frame the horizon. Horses, goats and other domestic animals munch on the sparse grass leading up to trails through the hills.

But deep inside the tent city there are no trees, no grass, no bushes, no grazing livestock nor beautiful, pristine views.

The white gravel, used to cover and contain the dust in this settlement, reflects the heat and is blinding at midday. Even in the cooler month of November, it takes only minutes for the skin to burn and sweat to roll down the back. 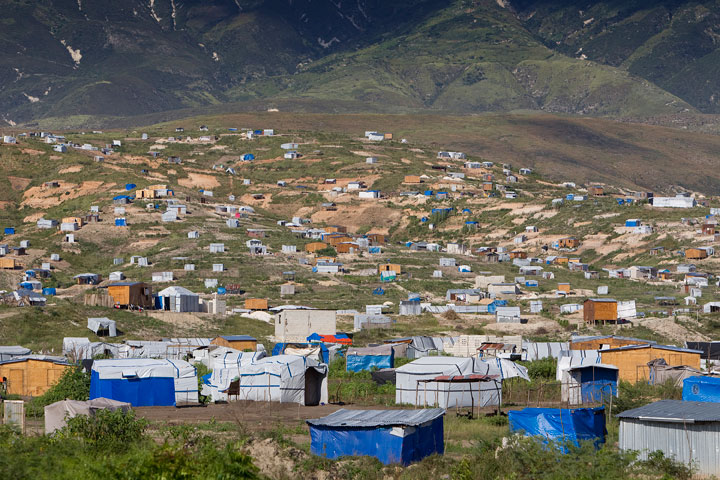 Camp Corail is home to about 10,000 people displaced by the January 2010 earthquake.

UMCOR plans to plant papaya and lemon trees for shade and a community garden for food and income. Because the camp is located at the base of a hillside, UMCOR is building a drainage system to keep the camp from flooding. In fact, busloads of residents were brought to this more secure camp from mudslide-prone areas during the rainy season.

Temporary wooden houses are also being constructed so tent dwellers eventually will be able to move into more private, comfortable living quarters. The homes will be placed in the same locations as the tents so everyone knows who will live where.

On a warm day in November, 3-year-old Deshca skips around one of the few sections with completed homes. Wearing a white dress, several sizes too large, she plays with the tattered satin ribbon around her waist. When she runs, she raises the dress hem, revealing dusty, little feet.

The family of six recently moved into the new house, and she is happy with the change from tent-dwelling.

"This is something I could never do when we lived in the tent," she said, washing clothes in a small plastic pan. "It was much too hot during the day."

Princifanie, who is pregnant, appreciates the comfort she has from owning a "real" home. She smiles and says, "Now if I get tired during the day I can go inside and lie down." 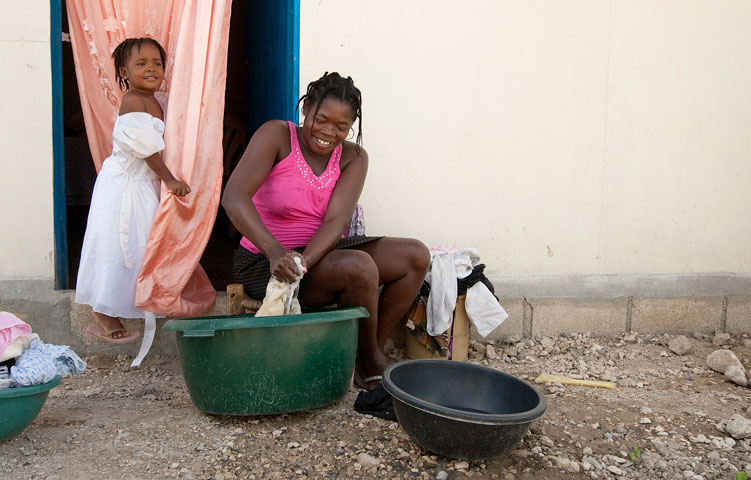 Princifanie washes her family's clothes while her daughter, Deshca, watches in front of their temporary home at Camp Corail.

Going inside to rest during the daytime is not a comfort offered to those still living in the tents, which are laid out with military precision on the white-gravel plots that cover an area of about 20 football fields.

The tents don't "breathe" so it is impossible to sit inside during the day, says Jean Dline, a young mother who lives in one of the tents in Block 3.

Her family has been waiting several months for a chance to move into the more substantial wooden homes like Princifanie occupies.

She says the family is unhappy here, but they can't go home. There is no home, nothing for them to return to, in Port-au-Prince.

"Life is very hard here," she says. "But we have no choice."

A hotel and ministry center run by The United Methodist Church in Romania hosts numerous programs to help Ukrainian refugees, as well as the rest of the community.
Disaster Relief