Editor’s Note: This is part one of a three part series about bullying. Read part one and part three.

Every day, Ann Brownell and her husband, Jim, pray for their 18-year-old daughter, Amanda, to improve, to show signs she is still here, if different from the girl she used to be.

If she were the same girl — not the one lying almost paralyzed in a hospital bed — she would be laughing aloud, probably singing a raucous show tune and definitely giving bear hugs.

“We called her hugs ‘world famous’ because Amanda would embrace you so tightly that there was no doubt you’d been hugged,” Ann said. “She was always happy and smiling.”

Amanda’s childhood was such a happy one, it’s no wonder so many were shocked when they heard she had used the cloth cord from her hooded sweatshirt to hang herself in a school restroom on Dec. 11, 2008. She barely survived and is today a paraplegic living in a nursing home near her parent’s home in San Jose, Calif.

After Amanda’s suicide attempt, her parents found the high school junior had received 3,500 text messages in one month. They suspect most of those messages came from two girls whom Amanda had tried to befriend, but who turned on her by falsely accusing her of being a lesbian and of having AIDS that she was intentionally spreading.

Even though Ann and Jim now know that Amanda was suffering deeply, on the surface they said she seemed “OK.” 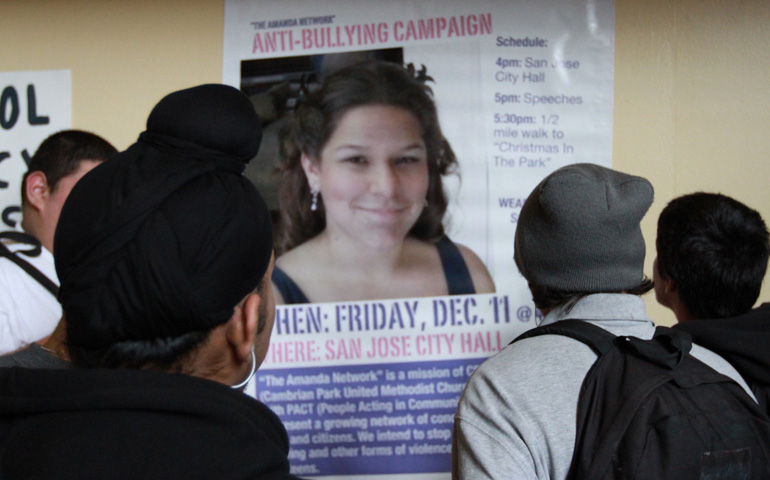 Students at Amanda’s high school view a poster featuring her portrait, which promotes an anti-bullying campaign.

‘She thought she was strong enough’

Amanda Brownell was what many would label as “artistic.” An actor, singer and dancer in the theater arts program, a member of the marching band and the school color guard, a gymnast, a musician and a soccer player, she was very active in and out of school.

Her home life was good too. In fact, people would often tell Ann and Jim, “You should write a book. Your kids are so great and well-behaved.” Theirs was the house where all the kids liked to hang out.

“It was the house where it was safe to say whatever was bothering them,” said Ann. “We always talked about anything and everything – there was no subject off limits.”

“Every day, I asked her how things were going at school, and she’d tell me a little, but acted like what was going on was no big deal,” her mother said. “She thought she was strong enough to handle it. So did her friends. They all thought they could deal with it, but they could not.

“I thought I had a great open relationship with both my daughters,” Ann said. “But when they get bombarded with negative stuff from their peers, they just replay those tapes over and over in their heads, and eventually they end up believing it.”

Now Ann visits Amanda every day in the nursing home. Nurses get a kick out of watching as she does “doughnuts” in the hallway with Amanda in the wheelchair.

“I can still see her, hug her … take her to look out the windows on a sunny day,” she said. “We play music constantly, tell jokes, listen to books on tape. We know she can hear, but we don’t know how much she can see. When we show her videos of her acting in plays and singing, she turns her head to listen. We know she understands.”

Since Amanda’s attempted suicide, none of the teens believed to have been involved in the bullying has come forward to apologize, nor has anyone been disciplined other than getting “a talking-to,” according to Ann. “It’s really sad that this kind of thing can happen” without consequences, she said.

Ann has dedicated herself to the Amanda Network, a ministry of Cambrian Park United Methodist Church in partnership with PACT (People Acting in Community Together). The network’s mission is simple: “People of faith and people of conscience protecting kids and teens against bullying, especially cyber-bullying.” 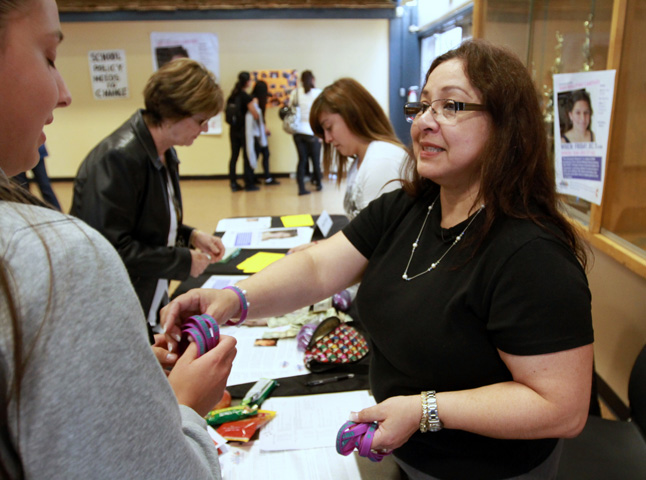 Why should the church be involved in this issue? Former Cambrian Park pastor Charlotte Bear said, “It’s a no-brainer.

“Our faith puts kids at the center of the kingdom,” she said. “Bullying is one of the biggest issues literally killing our kids. Why wouldn’t the church be all over this? Who better to care and to do something about it?”

Ann travels to schools across the county to tell Amanda’s story.

“I tell them that if someone is bullying them, they need to tell someone they trust — someone who will take them seriously,” Ann said. “I tell them never to give up; that there is someone who cares.”

It seems ironic that in Amanda’s suicide note, she wrote, “I bet nobody’s gonna even remember my name after this.”

“Eventually people will stand up for people who are being bullied, and bullying won’t be tolerated or accepted,” Ann said. “And people will talk about it without shame or fear. We need to stand up and speak out so that this doesn’t happen to anyone else.”

For more information or to join The Amanda Network Google Group, go to http://groups.google.com/group/TheAmandaNetwork-ABC or send an e-mail to [email protected].

Church should speak up about bullying