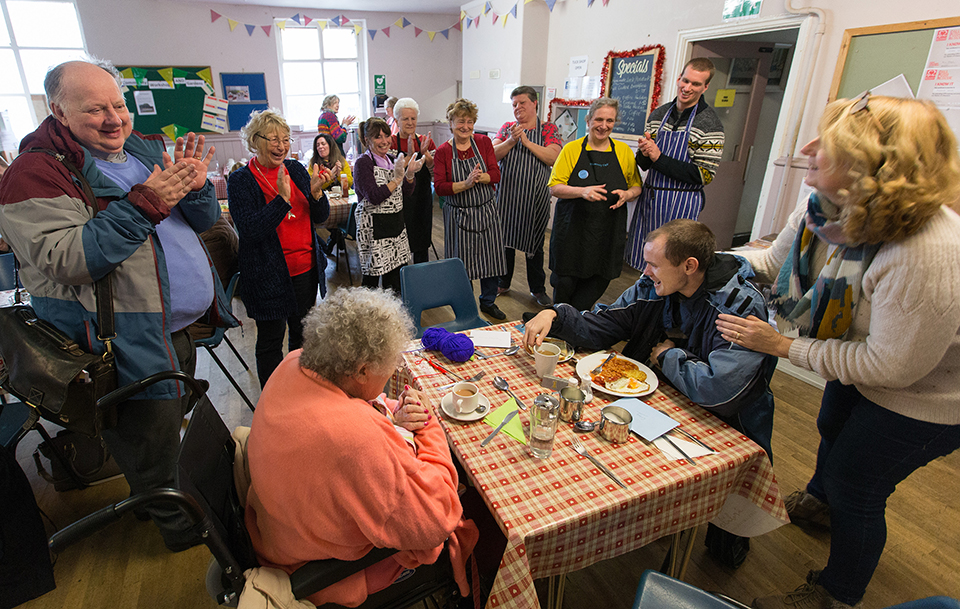 Editor’s note: This is the second of an occasional series of stories, “British Methodism: Staying relevant in Wesley’s homeland,” about today’s Methodist Church in Britain.

Nearly a decade ago, Cleggs Lane Methodist Church was about to close.

Then, the church agreed to help a local public health improvement team start a weekly men’s health group in this former coal mining community, part of Salford in the Greater Manchester area.

Men aged 20 to 70 and older found a safe place in the group to talk about their physical and mental challenges. A gardening project quickly followed and a café was organized four or five years later. 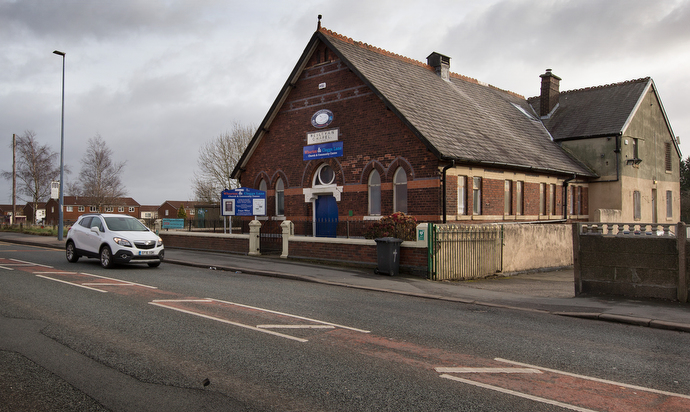 The former Cleggs Lane Methodist Church in Little Hulton, England, is now used for programs and worship space for the Wharton and Cleggs Lane Church and Community Centre — a local partnership between the Methodists and Wharton, a United Reformed congregation. Fundraising for a new facility is underway.

A lot has happened since. The church formed a local ecumenical partnership with Wharton, a United Reformed congregation, to become the Wharton and Cleggs Lane Church and Community Centre.  A new facility is planned once fundraising is complete.

Community café days — Tuesdays and Thursdays — are busy days at the church. “It’s quite labor intensive because everything is packed up and then brought out each time,” explains Jackie Conyers, the café manager. 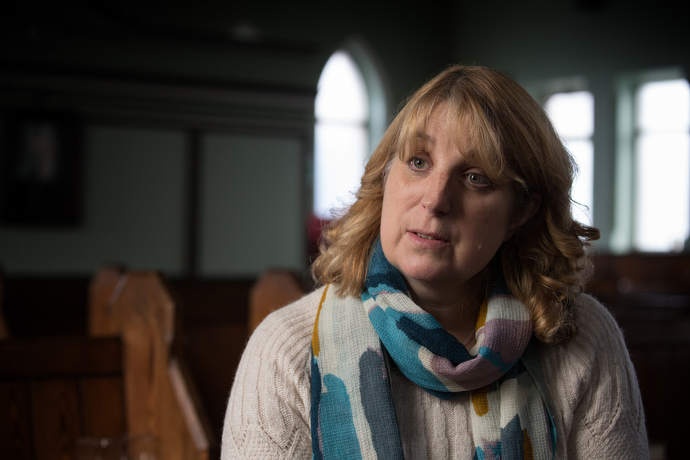 Jackie Conyers is manager of the twice-weekly community café at Wharton and Cleggs Lane Church and Community Centre.

The café is in a fellowship hall off the sanctuary of the old Cleggs Lane building. On this Thursday in early December, the hall is decorated for Christmas and the tables are covered with red-checked plastic tablecloths. The hot meal of the day is a full English breakfast — bacon, sausage, egg, fried tomatoes, beans, hash browns and two pieces of toast — for a reasonable price. 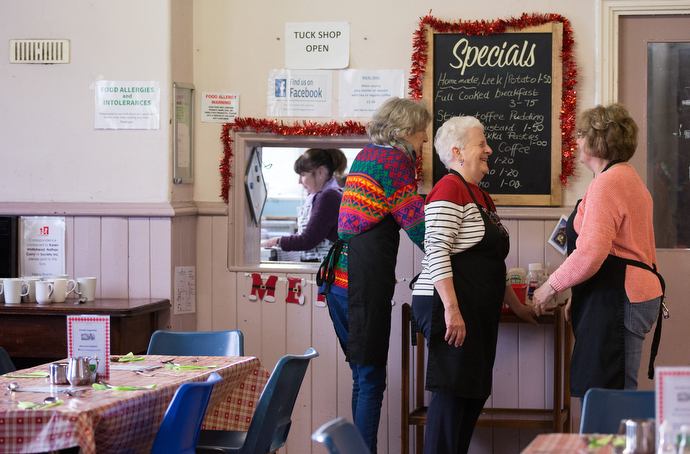 Volunteers gather to prepare for the community café.

The café clientele are mostly older, drawn to the food, the low prices and welcoming atmosphere. Mary Girdleston, 91, who lives nearby, has been coming twice a week for six or seven years. “I have my dinner,” she says. “They feed me well when I’m here. They help me out with all my problems.”

Residents of Little Hulton — one of the poorest parts of Salford — sometimes feel that people aren’t interested in them, says the Rev. Stuart Wild, the new Methodist minister of Wharton and Cleggs Lane. 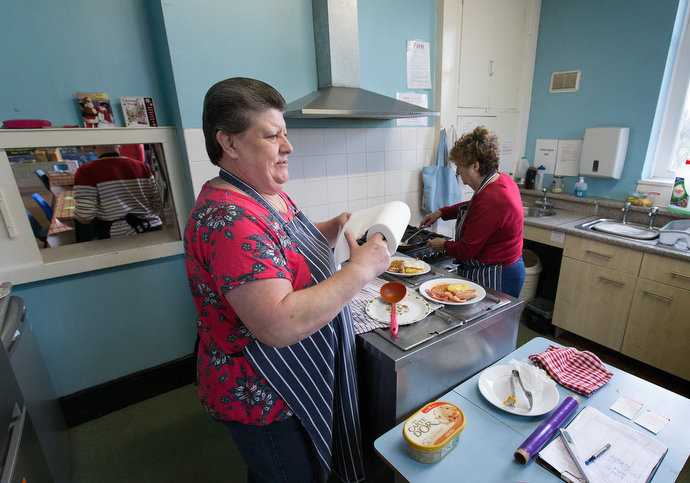 “But there’s also a particular love of the area,” he adds. “It’s greatest potential is in its people. There’s a great desire for community.”

For Wild, the church can act “as the risen Christ” for the community and serve alongside it.  “When they come here, they are welcomed, they are spoken to, they are listened to. I think that’s what the church is about.” 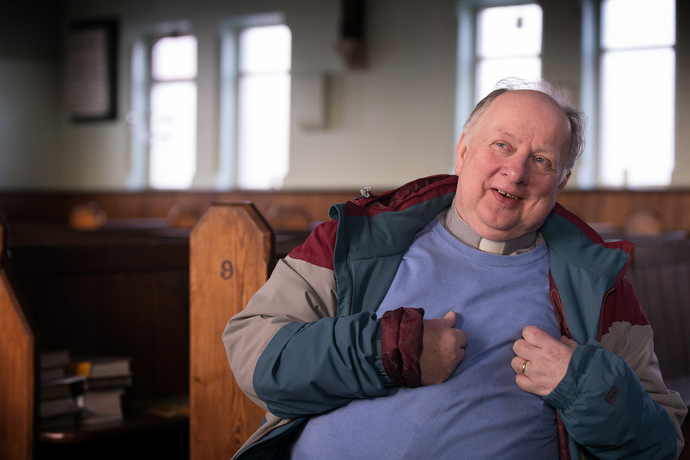 The Rev. Stuart Wild is the new Methodist minister of Wharton and Cleggs Lane Church and Community Centre in Little Hulton, England, one of the poorest areas of Salford, Greater Manchester, but a place, he says, “with a great desire for community.”

Conyers believes such hospitality is as important as the food. “Our philosophy is that you chat to the customers,” she points out. “Generally, the waitresses or waiters will sit down at the table with them, take their order and have a bit of a chat with them.”

When Joan Adams, 70, was growing up, Little Hulton had three churches — Methodist, Anglican and Presbyterian. Her family belong to Wharton, then Presbyterian, which later became a United Reformed congregation.

Church was the center of everything. On occasional “walking days,” church members would walk the streets – separately first by congregation and then as one – to signify God’s presence in town. “It was a procession of witness,” she recalls. “In the north (of England), it was very, very big.” 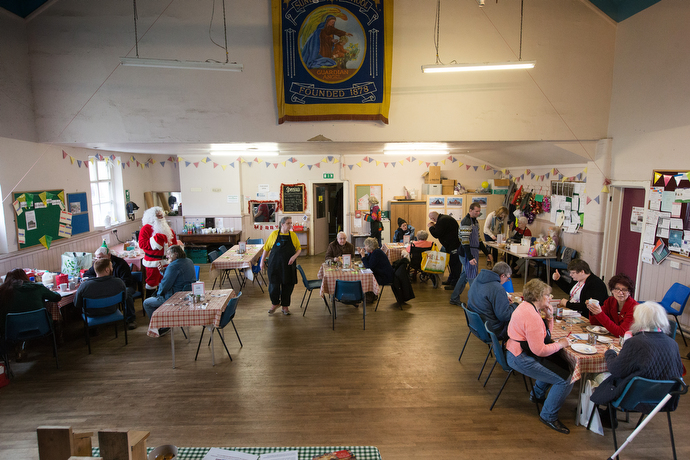 Church members, volunteers and community members gather for fellowship and a meal at the community cafe during the Christmas season. Photo by Mike DuBose, UMNS.

Wharton was “a vibrant church” until the last 10 years or so. Pooling resources with Cleggs Lane seemed to offer hope. “We’ve got a nice atmosphere,” says Adams, who is actively engaged in the new partnership.

There is a steady hum of conversation as the café fills up. The wait staff pass orders through a window between the kitchen and dining room. The meals, cooked by Mary Weldon, Maureen Dooley and Josephine Davis, are placed on the windowsill when they are ready. 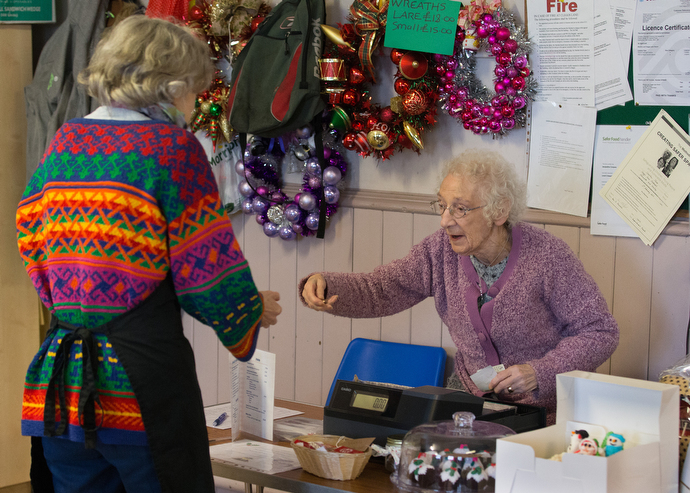 Muriel Reade (right), 88, serves as cashier and treasurer during the community café. 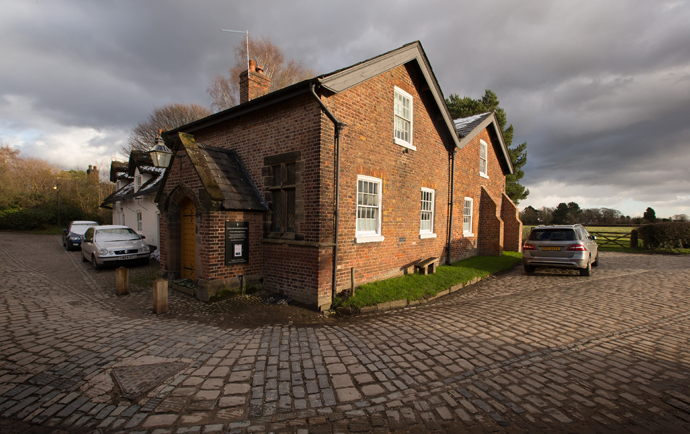 The Methodist chapel in the village of Styal was converted from a grain store in the 1830s.

Muriel Reade, a church member for 33 years, is the café’s volunteer treasurer. The 88-year-old prefers to calculate the customer’s bills in her head because she worked as a cashier and bookkeeper. “We probably get the same people every Thursday,” she says. “You recognize them and they recognize you.”

One of the more recent regulars, Conyers points out, is Patricia. “She hasn’t been out for years, but she’s really taken to the café and comes all the time now, which is a really lovely thing.”

Andy Hodgkins, the chair of the center’s community garden and workshop, brought Patricia to the café for the first time. He recognized her isolation after he found her crying at the end of a driveway one day.

“I don’t think anybody should have to live like that,” he says. Coming to the café “has improved her enormously.” A recent medication change also helped. “More than ever now, she needs places like this where there are people to talk to.”

Patricia herself says she has a lonely and solitary life. At the café, she finds solace. “They’ve been very kind to me.”

Patricia (center) visits with the Rev. Kathleen LaCamera Loughlin (left) and Andy Hodgkins during the community café. Loughlin is a United Methodist chaplain working in the area and Hodgkins is chair of the community garden and workshop at the center.

Cleggs Lane as a case study 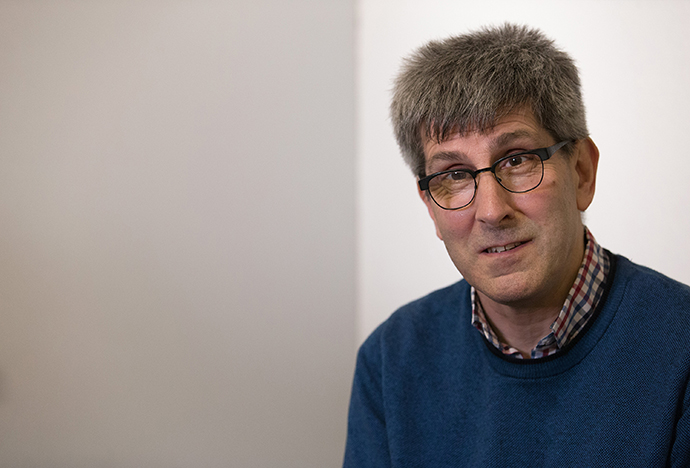 How can the church positively engage with the community on mental health issues?

Bob Bartindale, an engineer turned Methodist lay minister, decided to make that question the focus of his dissertation while studying for a master’s degree in practical theology. But he was shocked to find that people often put up “a whole range of barriers” toward such engagement.

Bob Bartindale, a Methodist lay minister who used Cleggs Lane as a case study, finds a healing aspect to the outreach. “There are people who are emotionally scarred, who are hurting, and the church is here for them.”

Some people come to the center’s programs specifically through a referral for a clinical care plan, says the Rev. Kathleen LaCamera Loughlin, a United Methodist who serves as a specialist mental health chaplain for the Greater Manchester Mental Health Trust of the National Health Service.

Activities like the community café or workshops offer a safe, low-key way to take part in social interaction, she explains. Some have lost all confidence “and yet they’re lonely and the isolation is harming them.”

Members of the men’s group also “have got needs in some ways,” says Christine Thiao, who manages the programs at Wharton and Cleggs Lane. Sometimes she acts like a caseworker, but is happy to provide extra support. “We’ve got a dynamic group, a group that I love very much.”

Derrick Bradbury, 77, joined the men’s group nine years ago. “I think if you don’t have some activity, you kind of vegetate,” he says. “You’ll sit in the house and watch telly and just sleep.”

Everyone now is working toward securing a permanent structure — three shipping containers welded together — for the group’s outdoor woodworking workshop. 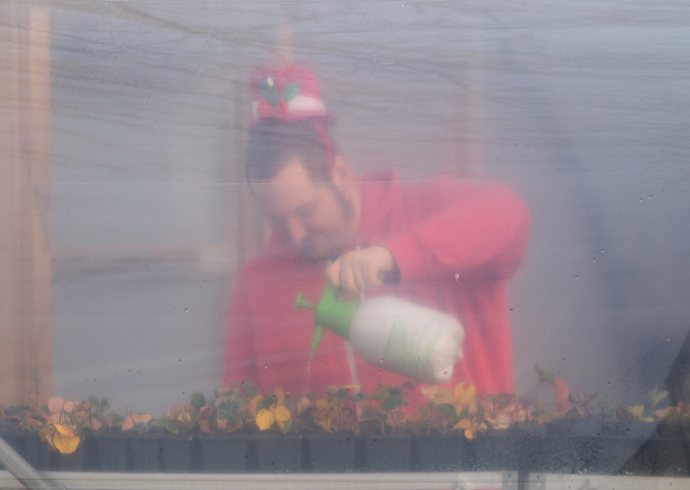 A polytunnel has served as a temporary shelter for an indoor gardening area and the men’s woodworking workshop on the grounds of Wharton and Cleggs Lane Church and Community Centre.

A polytunnel, a structure often used as a green house, had provided a temporary set-up for the workshop. But that arrangement was far from ideal, according to Hodgkins, who has a PhD in engineering and was elected leader of the men’s group. The tunnel also was damaged by vandals.

Thiao has applied for a 5,000-pound insurance payout; a 10,000-pound grant from the national lottery and a 10,000-pound Coalfields Regeneration Trust grant. “If we get those three in, that will give us a full workshop, with all the tools, heat, lighting, everything,” she says. 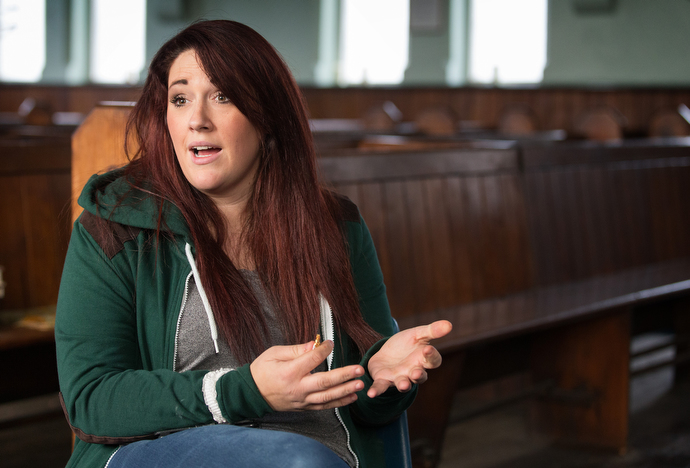 Christine Thiao works with the Wharton and Cleggs Lane Church and Community Center. A former youth and children's worker for the Methodists attends a Pentecostal church. But, "the Methodists, they have my heart," Thiao says.

It’s clear she takes satisfaction from the work and the opportunity to uplift both church and community. Thiao attends a Pentecostal church, but had worked previously within the Methodist circuit as a youth and children’s worker.

“The Methodists, they have my heart,” she declares. “I feel very much at home.”