Octogenarian Keresia Muzaruwetu from Nyamana village carefully minced her steps toward the newly completed Chitora-Gwarada Bridge with eyes cast on the eastern end of the bridge. For more than a decade, Muzaruwetu could not walk across this bridge. Cyclone Eline had ravaged eastern Zimbabwe and Mozambique in 2000.

Bridge rehabilitation finished in record time – starting in November 2014 and completing in April 2015.

Muzaruwetu is one of scores of villagers who thronged to witness the dedication of the Chitora-Gwarada Bridge by the Zimbabwe Bishop Eben K. Nhiwatiwa on April 25, 2014. Gwarada is a village in Chitora, located in southern Manicaland Province, Zimbabwe, some 56 kilometers (35 miles) from the provincial capital, Mutare.

“This is the first ever bridge project by the United Methodist Chabadza Community Development Program,” said the Rev. Lloyd Nyarota, program director.

The Chitora Gwarada Bridge, built by the government in 1992, improved transport networking, trading, market linkages and easy access to the social systems of the community. Eight years later, Cyclone Eline struck the Chitora community, leaving a trail of destruction.

Immediately, nine village communities lost connection to essential services. Because of damage to the western part of the bridge, children and sick and pregnant women had to travel 10 kilometers instead of fewer than four to school and the clinic. The rehabilitation of the bridge has brought life back to normalcy.

“In doing such activities as a church,” Nhiwatiwa said, “we are practicing what John Wesley would call ‘social holiness.’” He applauded the transformation of community life through Chabadza projects. 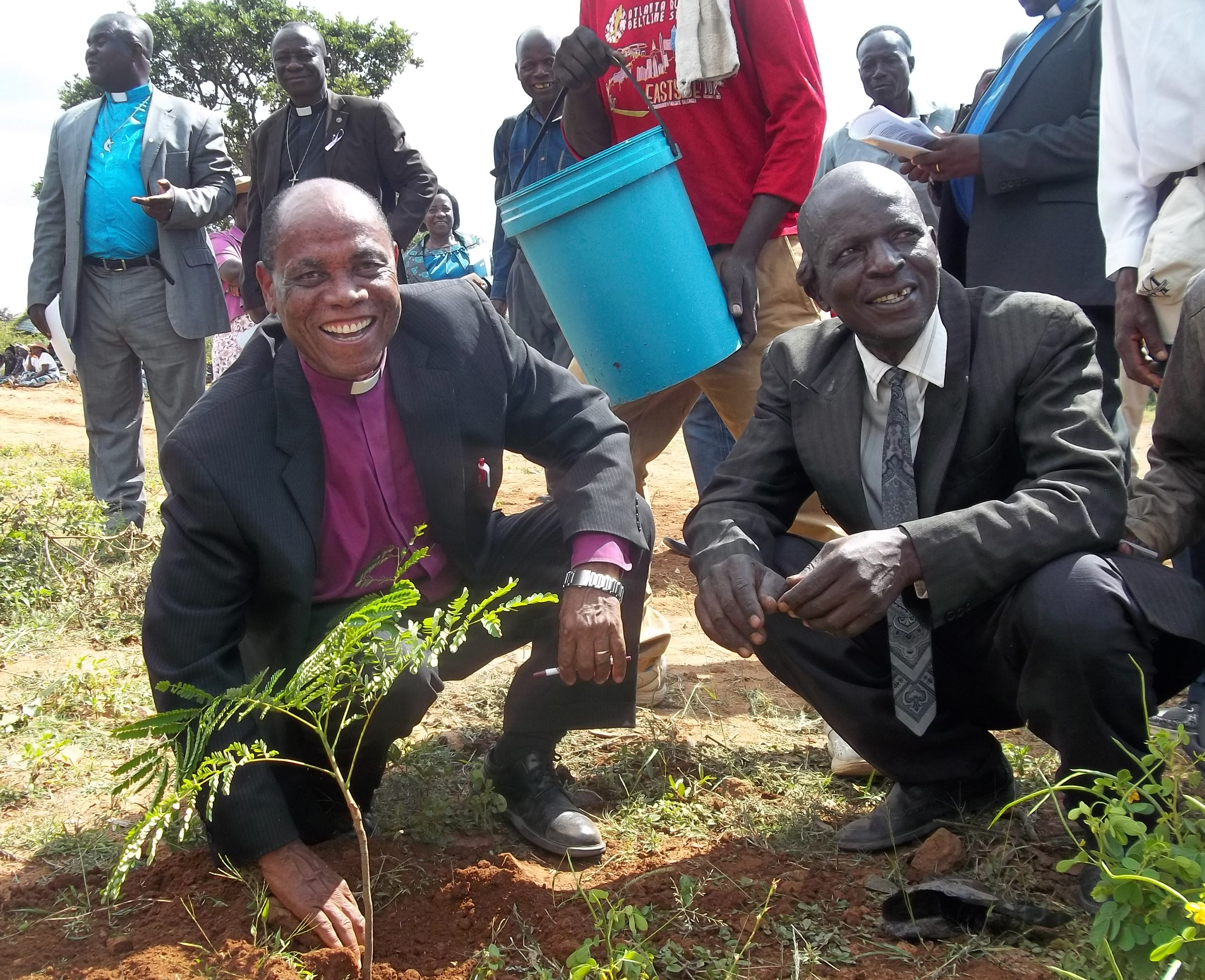 Bishop Eben K. Nhiwatiwa has maintained the practice of planting a tree at every dedication event. Photo by Taurai Emmanuel Maforo.

‘A miracle waiting to happen’

Following repeated and unsuccessful attempts by the community to engage local authorities to repair the bridge, the community learned of the Chabadza Community Development Program.

The Chitora Gwarada Bridge project was completed successfully through the Norway-Chabadza Development project office in Mutare and the Chitora community. The Mutare Rural District Council provided technical support. This was the bishop’s 16th project to dedicate.

Community involvement amounted to providing all locally available materials – 32 loads of stones, 24 loads of river sand and 45 wheelbarrows of gravel. The Chabadza Community Development Program supported with materials worth $16,000.

Muzaruwetu described the bridge completion as “a miracle waiting to happen.”

“I thought I will never live to see this day, but when [The United Methodist Church] came in November, we were just praying for this day to come,” she said.

“Unbelievable!” she exclaimed. Her face beamed as she looked at the bridge’s concrete surface. She staggered to get balance from her staff in her right hand and continued to move stealthily. Midway, she came to a shaky halt and stretched her hand toward me to help her cross the bridge.

In 2009, the Zimbabwe Episcopal Area and the Norway Annual Conference established a partnership that extends support to communities.

Nhiwatiwa’s Chabadza Initiative created a paradigm shift in the way the denomination handles mission work – a radical departure from the traditional missionary approach where communities were recipients. Today the church and communities are both partners and participants.