The Rev. Javier Rojas Terán, emeritus bishop of the Evangelical Methodist Church in Bolivia, died tragically March 12, said Bishop Modesto Mamati Achata in an official press release from the church. "During this time of pain, the Methodist community can feel the loss of our brother," Achata said.

Rojas Terán, 53, died in a car accident while traveling from La Paz, Bolivia’s capital, to Cochabamba, located about 236 miles southeast.

Rojas Terán left an important legacy in developing and strengthening the Evangelical Methodist Church in Bolivia during his 2009 to 2014 tenure. The Rev. Edgar Avitia, regional executive of Latin America and the Caribbean at the United Methodist Board of Global Ministries, described him as "a great man, with excellent administrative qualities, who loved God and his Bolivian people." 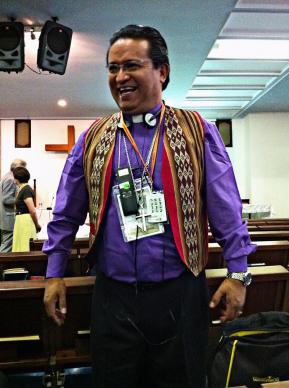 In his ministerial work, Rojas Terán forged a close missional relationship and partnership with the Northern Illinois Conference, a relationship that was formalized in June 2008. The partnership agreement included leadership training, infrastructure development, medical support for health-related ministries, support for social justice initiatives in favor of indigenous peoples, and promotion of knowledge about Bolivia in the areas of ​​influence in the annual conference.

Bishop Hee-Soo Jung, former episcopal leader of Northern Illinois and currently bishop of Wisconsin Conference, expressed regret over the sudden death of Rojas Terán. "He was a visionary leader who led Bolivian Methodism to new days of deep commitment in social justice and the gospel," said Jung. He stressed that the leadership of Rojas Terán was a positive influence for the Bolivian Methodist communities and all of Latin America.

A life-long Methodist and the child of Methodists, he has served in various functions at the local, district, and national levels, including National Secretary of the Laity Directive.

He has also been the administrator of the American Institute in Cochabamba. In 2007-2008, he served as the National Secretary of Stewardship and Finance, and in 2009-2010, he began to serve as bishop of the Evangelical Methodist Church of Bolivia. He was re-elected as bishop in December of 2010 for the 2011-2014 term.

In 2013, Chicago Area Bishop Sally Dyck renewed the partnership agreement between the church in Bolivia and the Northern Illinois Conference.

At the coliseum of the American Institute in La Paz, authorities, leaders and the Methodist community paid respects to Rojas Terán, visiting with his widow Maria Luisa Rojas, children, family and friends. Later, the bishop was laid to rest in the city of Quillacollo in Cochabamba.

Through small grants, the Encounter with Christ fund has nurtured Methodist mission and relationships in 26 countries of Latin America and the Caribbean.
Human Rights