Private prison companies are big business. But, is it moral for United Methodists to make a profit from the incarceration of people?

The United Methodist Church's pension agency has pondered that question since May. The Board of Pension and Health Benefits announced Jan. 3 its decision to prohibit investments in companies that derive more than 10 percent of their revenue from the management and operation of prison facilities.

"It came down to that profiting from the incarceration of others was just not consistent with our view of what the (denomination's) Social Principles ask for," said David Zellner, the board's chief investment officer.

The agency has the authority to make investment decisions.

The week after Christmas, the board sold about $1 million in stock in two companies that fell under the new screen - Corrections Corporation of America, more commonly called CCA, and the GEO Group.

With almost $17 billion in assets, the United Methodist program is the largest church pension fund - and 80th largest pension fund - in the United States. Some 74,000 clergy and lay personnel participate in the denomination's pension and benefits programs.

One of those participants is the Rev. V. H. "Sonnye" Dixon, lead pastor of Hobson United Methodist Church in Nashville, Tenn., who applauded the decision. He was an observer at a Nov. 14 demonstration at the CCA headquarters in Nashville.

Incarceration is necessary at times, he acknowledged. However, Dixon sees private prison companies as more interested in pursuing a profit than promoting possible rehabilitation and re-entry.

"It's just something that I don't think we as The United Methodist Church should be participating in in any kind of way," he said. 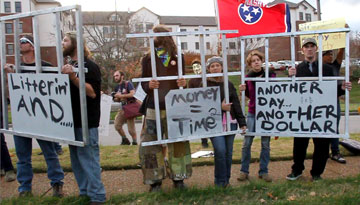 The board's decision comes after the United Methodist Interagency Task Force on Immigration first raised concerns about private, for-profit prisons, which governments around the globe increasingly use to detain unauthorized immigrants.

Allegations of widespread abuse and neglect have come with the expansion of private dentention. TheAustralian government, for example, dropped its contract with the GEO Group in 2003 after a commission found detained children were denied health care and subject to cruel treatment.

The United Methodist Board of Church and Society, the agency charged with advocating for the denomination's Social Principles, created the petition. Bill Mefford, the agency's director of civil and human rights, said he found troubling news reports about a violent private juvenile facility in Mississippi that houses teens with adults.

Phoenix Area Bishop Minerva G. Carcaño, co-chair of the denomination's immigration task force, said the group first learned of the situation with private prisons through the ecumenical partners that work on immigration concerns.

"The board of pension was very good about doing all the research into not only what it means to invest in these for-profit detention centers but also setting that alongside how we invest &ellipsis; in line with our Christian faith," she said. "This is a win for the connection." 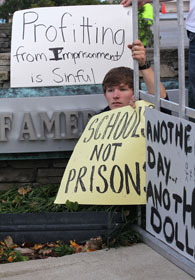 United Methodist groups, like many other religious organizations, long have participated in what the financial industry calls socially responsible investing.

The Book of Discipline, the denomination's law book, requires that all church agencies and institutions, including hospitals and universities, "make a conscious effort" to invest in line with United Methodist Social Principles.

As a rule, the United Methodist pension board and other church-related groups will not invest in a company that receives more than 10 percent of its revenue from the objectionable products. With this announcement, the pension board is adding companies that manage or operate prison facilities to the screen-out list.

"These companies that are responsible for operating prisons were such a small portion of the investment universe that it would not violate our fiduciary responsibility to implement this sixth screen," Zellner said.

The pension agency has amended its Statement of Administrative Investment Policy to say: "Investments will not knowingly be made in any company/corporation in which 10 percent or more of gross revenue is derived from the management or operation of federal, state, county, or municipal correctional facilities (jails, prisons, penitentiaries, detention centers, prison camps, transfer centers)."

The first statesthat "the mistreatment or torture and other cruel, inhumane, and degrading treatment or punishment of persons by governments for any purpose violates Christian teaching and must be condemned and/or opposed by Christians and churches wherever and whenever it occurs."

The second calls for the creation of a justice system that provides "for the care and restoration of victims, offenders, criminal justice officials, and the community as a whole."

"We simply do not want to profit from a business that does that."
Barbara Boigegrain

The board's decision also came after a months-long investigation that included visits to a private prison near Indianapolis as well as a government- run correctional facility in Joliet, Ill. Pension staff members also met with CCA management and engaged in conversation with the GEO Group.

According to the Interfaith Center for Corporate Responsibility, a number of faith-based investors have engaged in shareholder advocacy with private prison companies to encourage humane treatment of detainees.

Barbara Boigegrain, the pension board's top executive, said agency directors and staff did discuss whether further engagement with these companies would be productive. The board of directors ultimately decided it did not want to invest in the detention industry.

Daniel Carrillo, campaign coordinator for the National Prison Divestment Campaign, said he thinks the pension board is the first religious group to withdraw investments entirely from private-prison companies.

What other groups are doing

The pension agency is just one of many United Methodist groups - including universities, hospitals and foundations - that oversee investments.

Byrd L. Bonner, executive director of the United Methodist Church Foundation, said foundation directors plan to discuss whether to continue investing in private prison companies at their May meeting. The foundation manages endowments for church agencies and other general church initiatives.

General Conference, the denomination's top lawmaking body, next meets April 24-May 4 in Tampa, Fla. The quadrennial gathering often takes up petitions for the denomination to withdraw investments from certain types of companies.

Bonner, who chairs the denomination's Socially Responsible Investment Task Force, and other church leaders do not know of any petitions heading to this spring's General Conference that specifically seek divestment from private-prison companies.

Boigegrain said she feels such action is unnecessary.

"We don't expect or desire any action by General Conference with regards to this additional screen," she said. "We think the language that is in the Book of Discipline still pertains."

Officials of the United Methodist Church’s pension and health benefits agency met with central conference representatives to discuss pension plan sustainability in a challenging period for the denomination.
Human Rights