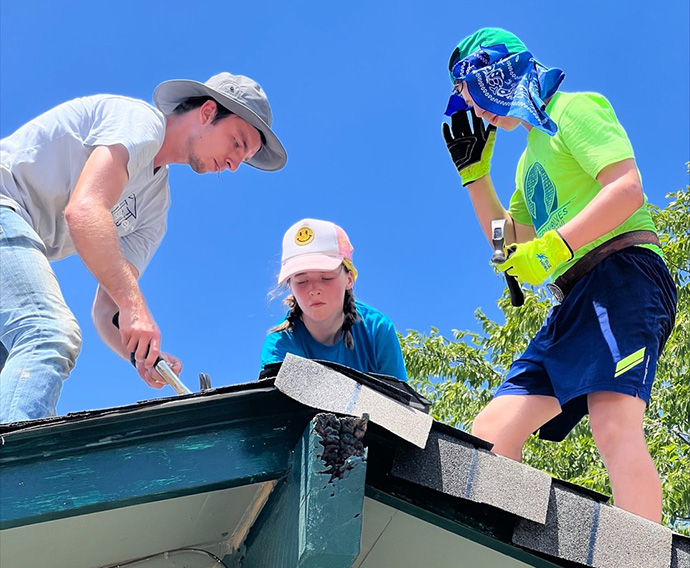 The youth of First United Methodist Church of Dallas made a summer mission trip last week, their first since the pandemic began.

They and their chaperones came home in good spirits after four days of helping repair roofs for low-income residents in San Antonio. And they had tales to tell.

The United Methodist Social Principles address climate change, calling on churches and other denominational entities to reduce their carbon footprint.

Global warming is a key issue for the United Methodist Board of Church and Society.

“The highest temperature we saw was 105, but I would say it felt at least 10 degrees hotter when you were up on the roof,” said Dorian Albert, youth ministry director. “The tar from the shingles was melting onto our shoes and gloves.”

Across much of the U.S., as well as Europe, it’s been a summer of record-setting heat, presenting challenges and opportunities for United Methodist ministry.

One example is in Philadelphia, where Calvary United Methodist called off in-person worship on July 24, going to online only. The temperature hit 99 degrees — a city record for that date.

Calvary has fans but no air-conditioning.

“We made the right move,” said the Rev. Tim Emmett-Rardin, the church’s pastor. “We felt, at best, it would have been uncomfortable. And at worst, it might have been unsafe.”

The First Dallas group didn’t have to curtail its work in San Antonio but made sure to rotate kids off the roofs every 15 minutes and keep a cooler full of Gatorade handy.

“We are so proud of how hard our students worked in spite of the extreme heat,” Albert said. 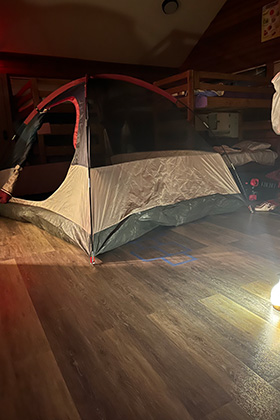 At United Methodist-related Camp Tanako near Hot Springs, Arkansas, tents have been moved inside at times this summer due to unusually high temperatures. Photo courtesy of Camp Tanako.

Camp Tanako, near Hot Springs, Arkansas, is another United Methodist ministry that has had to make heat-related adjustments.

The camp has seen temperatures in the triple digits, and it’s unusually dry, leading to heat advisories and a “burn ban.”

“We haven’t been able to do our s’mores around the campfire,” said Kayla Hardage, executive director. “We’ve baked s’mores in the oven or made a trail mix that had marshmallows and graham crackers.”

Trinity United Methodist in Chico, California is serving as a cooling center this summer, giving unsheltered people a respite from the 100-degree-plus daytime temperatures.

With the Pacific Northwest seeing record heat, Wesley United Methodist Church in Yakima, Washington, answered a call from local government agencies to keep its doors open for folks needing to cool off.

“We’re at 106 today,” the Rev. Shane Moore, pastor, said on July 26. “This is one of those easy places for us to reach out and be a partner with our community.”

Another Wesley United Methodist, in Phoenix, also is serving as a cooling center this summer. The Rev. Sylvia Harris, pastor, credits longtime member Rosalyn Gorden as the catalyst for a comprehensive outreach to homeless people that includes providing an outdoor shower and health screenings by nursing students.

Phoenix is used to 110-degree (or higher) summer days, but Harris notes that this summer is unusual in having nights where the temperature never gets below 90. 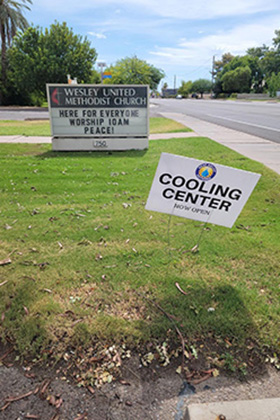 Wesley United Methodist Church in Phoenix is one of several churches in the denomination opening as cooling centers this summer. Photo by Sylvia Harris.

“There’s just no relief,” she said.

Marble Falls, Texas, about an hour from Austin in the Texas Hill Country, also is no stranger to big heat. But this summer, the high temperatures arrived early and have stuck around, causing a general scramble for shade.

“The police officers have been pulling into our lot and parking under our trees to do their paperwork,” said the Rev. Ellen Ely, pastor of First United Methodist of Marble Falls.

Ely’s church is for the first time opening as a place to cool off. Volunteers come from the Highland Lakes Crisis Network— a group of local churches that respond together to emergencies.

“I called the executive director in early June and said, ‘Hey, Kevin (Naumann), if you need a cooling center, we’re in. It’s going to be a tough summer,’” Ely said.

That’s been the case a few hours north in Sherman, Texas, where a nonprofit called Grand Central Station Sherman provides breakfast and lunch to the needy.

With local temperatures routinely topping 100 in July, and no break in sight, First United Methodist Church of Sherman will begin Aug. 1 to supply volunteers so that Grand Central Station Sherman can stay open as a cooling center through the afternoons.

The Rev. Denise Peckham is pastor of First Sherman, where the thermostat for the sanctuary has been set a little higher lately. Some congregants have grumbled, but Peckham believes it’s a necessary conservation measure.

It eases the power grid a tad and helps the church’s budget.

“Our utility costs are just like everybody else’s — going through the roof,” Peckham said.

Volunteers have braved triple-digit heat to deliver food bags. Scott Meier, the church’s director of missions and community outreach, has been kept hopping as well. 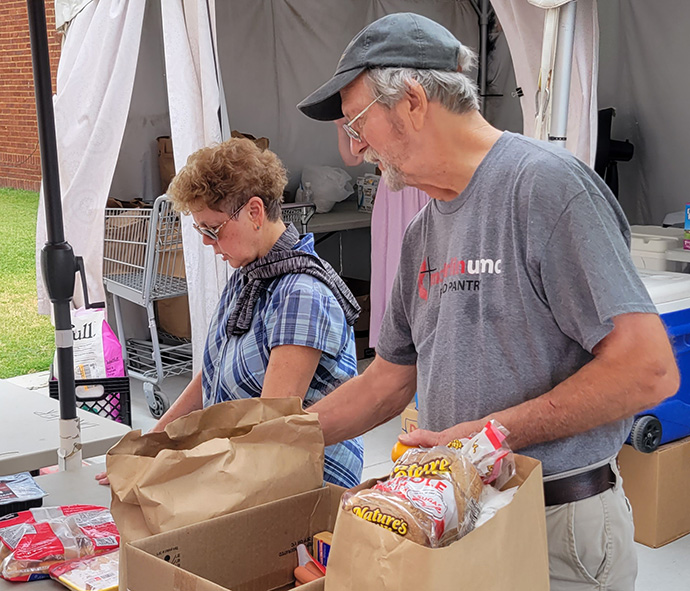 “We’re seeing more and more people seeking help with their electric bills, just in the last couple of weeks,” he said, adding that the real crunch will come when bills for July and August arrive.

The National Oceanic and Atmospheric Administration reported that 2021 was the fourth warmest year in the contiguous U.S. in a 127-year period of record keeping. The agency said the six warmest years have all occurred since 2012.

Meier sees the effects on ministry with the poor.

“With summers that are getting hotter, for people who are in marginalized situations of any kind, it’s just very difficult to maneuver,” he said.

Even in Brooksville, Maine, a coastal town where people usually go to escape the heat, there’s been a need this summer for a cooling center. Brooksville United Methodist has filled it, opening for that purpose on Tuesdays, when a weekly farmers’ market brings more people into town.

A 2020 NOAA publication notes that climate scientists are nearly unanimous in concluding that human activities are increasing heat-trapping gases in the atmosphere. The scientists say that largely accounts for a 1.8°F (1.0°C) rise in global average temperatures since the late 19th century.

The Rev. Kirk Nave preached a sermon on global warming in 2007. His community —Winchester, Virginia — has had a mild and wet summer so far. But he’s still making the case that Christian discipleship requires environmental stewardship.

“It’s not our world,” said Nave, senior pastor of Braddock Street United Methodist Church. “Even though we’ve got our mortgage payments, we don’t own it. We’re to take care of it and be good stewards.”