Update: The Judicial Council, The United Methodist Church's top court, has scheduled a special session Nov. 9-11 to consider the appeal of Bishop W. Earl Bledsoe concerning his involuntary retirement as an active bishop. The location is still to be confirmed.

Bishop W. Earl Bledsoe is appealing to the Judicial Council, The United Methodist Church's top court, in an effort to overturn his involuntary retirement as an active bishop.

"Bishop Bledsoe has not been accused of or charged with any chargeable offense under The (Book of) Discipline, nor have any formal written complaints been filed or processed against him," said the appeal filed by Jon R. Gray, a retired judge in the Sixteenth Judicial Circuit of Missouri and former Judicial Council member.

"There are no administrative or judicial actions pending," the appeal continued. "He is not under suspension."

The appeal contends that the vote by the South Central Jurisdiction's episcopacy committee and later an affirmation by the jurisdictional conference delegates to remove Bledsoe used a provision in church law that violates multiple parts of the denomination's constitution. The appeal also says Bledsoe's forced retirement infringes on other aspects of church law.

Paragraph 408.3 of the Book of Discipline, the denomination's law book, says that a jurisdictional episcopacy committee, by a two-thirds vote, can place a bishop "in retired relation" if the committee finds it "to be in the best interests of the bishop and/or the Church."

General Conference, the denomination's top lawmaking body, this year added a sentence to the provision that said the committee would need to report clearly its reason for its decision to the jurisdictional conference. The change took effect immediately.

A variation of this provision for jurisdictional episcopacy committees has existed since the 1976 Book of Discipline.

However, longtime church observers know of no other case before this one in which an episcopacy committee actually used the measure to retire a bishop against that bishop's desires.

Don House, the episcopacy committee's chair, said on July 26 that he was open to the appeal.

"The arguments presented in the appeal largely address questions of constitutionality and the relevance of specific disciplinary paragraphs," he said. "Judicial Council responses to these arguments will offer much-needed clarity."

Bledsoe, 61, and in his first term as bishop, has led the North Texas Annual (regional) Conference. He was the first bishop elected during the 2008 South Central Jurisdictional Conference. 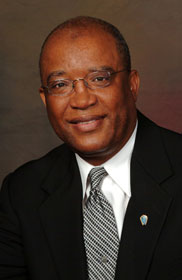 The appeal is seeking the Judicial Council's declaration that Paragraph 408.3 is unconstitutional and therefore unenforceable. It also seeks a declaration that the South Central Jurisdiction episcopacy committee "failed to follow a fair practice in its action to involuntarily retire Bishop Bledsoe."

The appeal asks that Bledsoe immediately be reinstated as an active bishop and assigned to an episcopal area within the South Central Jurisdiction.

It also urges the Judicial Council to determine that Bledsoe "is entitled to be made whole for all costs and expenses incurred by him (in the case) &ellipsis including, but not limited to, relocation expenses, travel and lodging expenses, fees, costs and related expenses."

How it got to this point

After a hearing on July 16-17, the episcopacy committee decided - by a vote of 24-4 with two abstentions - to place Bledsoe in involuntary retirement. The 30-member committee includes a lay and clergy member from each of the jurisdiction's 15 current conferences.

House, the episcopacy committee's chair, had said that night that he expected Bledsoe to appeal the committee's decision.

The South Central Jurisdictional Conference delegates on July 19 overwhelmingly affirmed the episcopacy committee's decision to compel early retirement. The vote came after an emotional discussion that included statements from both Bledsoe and House. The final tally was 208-45.

House told the delegates before their vote that the panel had heard complaints about Bledsoe that could have led to formal charges under church law and ended with him losing his clerical credentials. "So we looked for a compassionate path," House said. He did not, however, explain the nature of those complaints.

Bledsoe told delegates that any complaint against him under church law should have gone through the denomination's process for dealing with such matters. That process includes an investigation.

"When Don House talks and gives those little zingers, it makes it sound like he somehow is trying to protect me," the bishop said. "I want you to know that does not need to happen."

Bledsoe later told the United Methodist News Service he has heard only "innuendo" of complaints against his leadership.

"That's why I say if there were an investigation, you would be able to ferret out what is legitimate and what is not legitimate," he added. "When it's just taken on the face that there is a complaint without anyone filing one, that is the injustice."

Paragraph 2702.1 in the Book of Discipline lists the chargeable offenses clergy, including bishops, could face under church law. Those mostly deal with violations of the church's requirements on matters of sexuality regarding faithfulness in marriage, celibacy in singleness, the ban on same-sex unions and the avoidance of sexual misconduct. Chargeable offenses also include crime, dissemination of teachings contrary to established church doctrine, "failure to perform the work of ministry" and "disobedience to the order and discipline of The United Methodist Church."

Left out of appointments

On the night of July 20, House announced that the episcopacy committee and the South Central Jurisdiction's bishops had agreed that Bledsoe be placed in retired status after Aug. 31 until the Judicial Council renders its ruling.

The Judicial Council already has agreed at its next session in October to review a request from the South Central Jurisdiction College of Bishops for a ruling on Paragraph 408.3 .

It is unclear at this point whether Bledsoe's specific case could be taken up then. The deadline for requests to be on the October docket was July 15.

The full Council of Bishops needs to approve the recommendation. Dorff said the body was likely to do so soon.

It is not certain whether Bledsoe would be assigned to the Northwest Texas and New Mexico Episcopal Area if he were to be reinstated.

Meanwhile, a small group of clergy and lay people in the North Texas Conference have started getting together to work toward bridging divisions that have formed in the wake of Bledsoe's situation.

"We are deeply aware of a variety of emotions in response to the difficult events surrounding jurisdictional conference and the involuntary retirement of Bishop Bledsoe," the group's statement said. "We acknowledge our conference is fragile along many dividing lines, but we are also committed to guiding the healing process and strengthening our covenant."