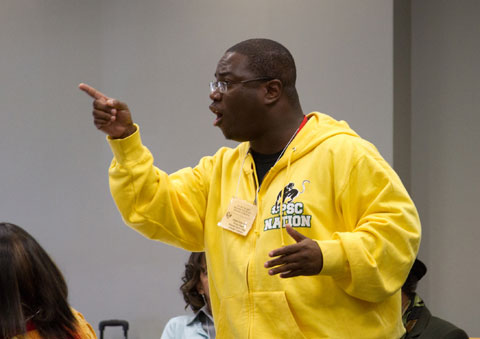 The Rev. Ronnie Miller-Yow, national president of Black Methodists for Church Renewal and pastor of Wesley Chapel United Methodist Church in Little Rock, Ark., shares his perspective at the Can We Talk? gathering. UMNS photos by Amy Forbus.

Proposals for change across the denomination drove the discussion at a gathering of African-American church leaders from the South Central Jurisdiction.

The main question that had United Methodists talking at the November gathering was: "How does the Call to Action affect African-American churches?"

The Call to Action is an effort initiated by the Council of Bishops and Connectional Table with the charge to help The United Methodist Church better fulfill its mission to make disciples of Jesus Christ for the transformation of the world. The denomination's Connectional Table has submitted legislation to the 2012 General Conference that, if passed, would consolidate agencies and allow the redistribution of up to $60 million in general church funds.

The Rev. C.E. McAdoo, superintendent of the Southwest District of the Arkansas Annual (regional) Conference, urged the more than 50 participants at Can We Talk? to keep an open mind.

"If we come in with all the answers, why do we need to be anywhere?" he told those meeting at United Methodist-related Philander Smith College in Little Rock.

The plan is for the offices to be subsumed under a new United Methodist Center for Connectional Mission and Ministry. Legislation submitted to General Conference calls for the center to have a 15-member board. That new board would oversee general funds that support mission and ministry.

A significant concern among Can We Talk? participants was whether the smaller size of the proposed new leadership structure would allow the voices of ethnic and racial minorities to be heard. Leaders of the five groups that represent the denomination's ethnic constituencies and General Conference delegates in the Northeastern Jurisdiction expressed similar worries. 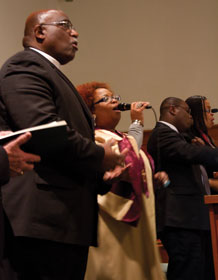 "I'm not hung up on the number," Palmer said. "The focus on the '15' is potentially delusional."

He said the new proposed structure includes about 230 leaders, roughly one-third of the number of directors now on the church's general boards and agencies.

He acknowledged the kind of change in the proposal does mean "there is a vigilance that will be needed" to ensure diverse voices remain at the table.

"I don't have any doubt that those skills and competencies are there," Palmer said. "We are leader-full. We're not lacking in that."

Can We Talk? also included a roundtable discussion led by three bishops: Charles Crutchfield of the Arkansas Area, Robert Hayes of the Oklahoma Area and James Dorff of the San Antonio Area.

The two-hour session included tough questions that covered a variety of topics such as whether the financial implications of denominational decline actually serve as the primary motive for change and how bishops plan to measure "congregational vitality."

"I think what we need is to remind ourselves that this is a work in progress," Hayes said of the restructuring proposal. "It's going to go to a legislative committee, and it's going to go before the General Conference. And if we don't make our voices heard between now and the beginning of May, well, then we're going to be responsible for not making known our anxiety at a time when we need to."

Some participants expressed concern that the proposed changes seem driven by fiscal concerns rather than ministry.

Hayes said the changes seem to focus on the question, "How do we retool, reboot ourselves to do more efficient, effective ministry with less?" 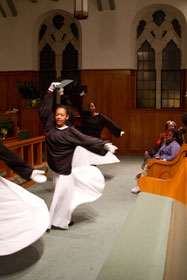 Discussion about the concept of congregational vitality centered on concerns over how bishops will define a vital congregation. The three bishops on the panel agreed that context plays a crucial role in determining vitality.

"For me, it comes back down to the annual conference," said Hayes. He said he plans to work with his conference office of congregational development and the cabinet to determine what a vital congregation looks like in Oklahoma. "I can't let General Conference determine for me what's vital and what's not."

Crutchfield spoke of a 10-member rural church that fits his definition of a vital congregation.

"It's worthy of our attention," he said. "It's not going to grow; it's going to die. But, it's going to live until it dies. Are we going to affirm that? Of course we are.

"There's not going to be some sort of template that says, 'If you don't grow the church by 5 percent in membership every year, you are not vital.'"

The most critical component of a vital church, Crutchfield said, is committed laity.

"We know something about how to hold ministers accountable," he said. "We have got to find a way - and we have not found it yet - to hold laity accountable to their baptism&ellipsis. It's not just the preachers."

Church turnarounds are not common, Hayes said, because clergy trained to maintain congregations find themselves trying to revitalize them, creating a vicious cycle of burnout.

"Every bishop in the South Central Jurisdiction is looking for gifted black leadership," Hayes said.

The Rev. Ronnie Miller-Yow, current national president of Black Methodists for Church Renewal and pastor of Wesley Chapel United Methodist Church in Little Rock, said he was gratified by the comments from the bishops.

"I'm glad to hear the bishops take some ownership of the problem," he said.

"Somehow we've got to give a sense of security to the laity," he said, adding that the appointment system fosters a lack of trust, with laity reluctant to step out in faith because of fear their new pastor soon will be appointed elsewhere.

The group spent time drafting a document to identify issues it would like to see considered leading up to the 2012 General Conference. Those issues included the concept of cultural competency; accountability and empowerment of the laity, and concerns already presented by the caucus group Black Methodists for Church Renewal.

The group planned to submit the document to the Interim Operations Team, which was named by the Council of Bishops and the Connectional Table to serve as a catalyst for changes recommended in the Call to Action report. Palmer serves as convener of that team.

Now in its fourth year, Can We Talk? has become an annual forum for African Americans to engage in dialogue about the future of The United Methodist Church. The fifth Can We Talk? gathering is set for Oct. 19-20, 2012, in Houston.