Year after year, when students from the New York Annual (regional) Conference boarded buses to visit historically black colleges, they envisioned their future. They also saw history in the making as they walked the campuses. Each time they opened a door or leaned against sun-warmed bricks and mortar, they touched the fruition of others' dreams.

Forty years ago, when the 1972 General Conference established the Black College Fund apportionment, United Methodists made a commitment to justice ministries that began with the work of the Freedmen's Aid Society.

Organized following the Civil War to educate people newly freed from slavery, the society helped to establish more than 70 schools in the south and southwest regions of the United States. Eleven of those institutions remain (some because of mergers). They are supported by the tithes, offerings and donations of United Methodists across the connection.

For 15 years, the Rev. Julius S. Scott Jr. provided leadership at one of those United Methodist-related historically black colleges - Paine College in Augusta, Ga. He saw firsthand how the generosity of United Methodists fulfilled the dreams of thousands of students.

The Black College Fund "was genius, really," he said in a recent interview. "It provided us with a pool of funds we could rely on and direct to our most urgent needs. A lot of funds that come to colleges are designated, especially federal funds. They only can be used in a specific way. (The) Black College Fund, on the other hand, allowed me as an administrator to address critical concerns immediately."

One of those concerns included implementing capital campaigns to repair aging buildings and to construct new, modern facilities. "At Paine," he said, "we built a $5.5 million building; the largest gift came from the Black College Fund. At the same time, we were able to use that gift as leverage when we approached foundations and other organizations for matching funds or for seed money for additional projects."

Doing 'all the good they can'

Funding through the Black College Fund also enables college administrators to recruit and retain stellar faculty. A keystone of the historically black colleges is to allow students to interact with staff who serve as cultural, spiritual and academic role models and mentors. 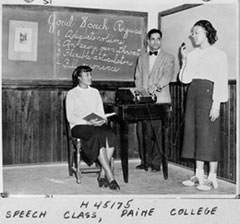 An archived photo depicts a speech class at Paine College in Augusta, Ga. Photo courtesy of the Commission on Archives and History.

"Having our choirs sing at annual conferences all across the country," Julius Scott said, "gave our students critical experience in articulating the value of their college education and their campus experience at a historically black institution. We took them everywhere, and everywhere they went, they had a chance to tell a story, meet alumni and make church connections invaluable!"

Scott also emphasized the importance of the summer intern program. "We picked the most highly motivated students and sent them out in the world to, not only gain life and work experience, but (also) to represent their college and our institutions. This program was critical to the church having a 'face' for the funds they were giving."

Colorado resident Pensal McCray and her three daughters are all graduates of Bennett College for Women in Greensboro, N.C. Yet, her investment in young people expands far beyond one historically black college. She supports the work of these institutions using a three-point approach: college fairs, workshops and tours.

The backbone of her work is college workshops, designed to help students get into college, complete degrees and continue to graduate school. The workshops advise students on filling out applications, writing essays, interviewing for scholarships and developing leadership skills. In some cases, college students inspire their parents to return to school and complete degrees. 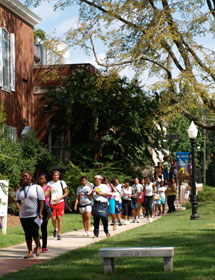 Bricks and mortar. Life and breath. Visions and dreams. Present and future. All are made possible through 40 consistent years of giving through the United Methodist Black College Fund.

The United Methodist Black College Fund-supported colleges and universities include: