It’s 45 minutes before Sunday services start at John Wesley United Methodist Church, but already the sounds of a bassist and drummer warming up rumble through the sanctuary.

Angel Haynes strides in, armed with a tambourine adorned with flowing blue scarves. She immediately starts moving to the rhythm, using the tambourine to accent the beat.

She will spend the whole service on her feet, swaying with the music and shouting out the occasional “Amen!” She has been a member of this predominantly Black congregation for four years, and occasionally testifies during worship about her experience visiting and then becoming one of the 400 or so members.

“I once was a visitor,” Haynes said. “But look at me now; God has given me a home. … We’re not visitors here. We’re all family just looking for a home.” 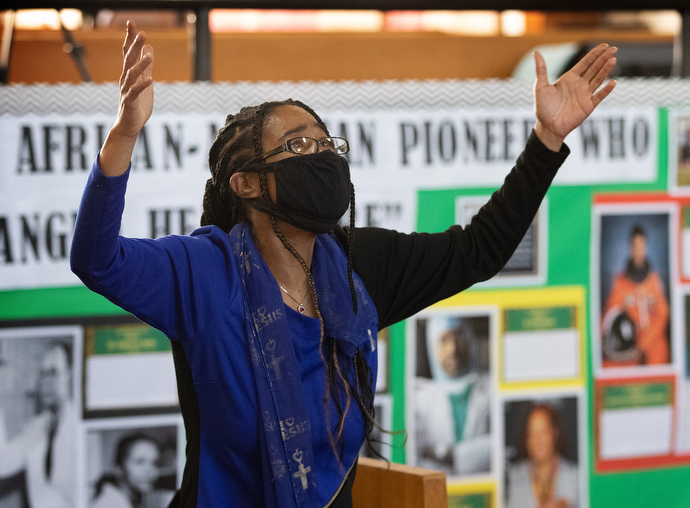 The forerunner of John Wesley United Methodist Church was formed in 1898 in this Nashville working-class neighborhood, which is on the outskirts of the trendy 12 South district.

Black History Month is duly celebrated at John Wesley United Methodist Church, but its pastor is equally — perhaps more so — interested in the future.

“It’s up to Black folk to make sure our history continues to go all year-round,” said the Rev. Daniel M. Hayes, who is in his 10th year as pastor of the church. He had a previous stint at John Wesley United Methodist Church in the 1990s.

“I think the way for Black people to move forward, especially young Black people, is to be inclusive, instead of being just ‘Black is this, Black is that,’” said Hayes, 64. “I think sometimes that holds our kids back. We have to learn to integrate, mingle with everybody.”

At the Feb. 6 service, Janice A. Hayes, the pastor’s wife, talked about the accomplishments of Dr. Rebecca Lee Crumpler (1831-1895), the first African American woman to become a medical doctor.

“Although she encountered prejudice and hostility as a Black female doctor, she persisted, and soon discovered her life’s mission, treating illness in poor women and children,” Janice Hayes told the 50 or so congregants gathered on a Sunday still affected by the coronavirus. 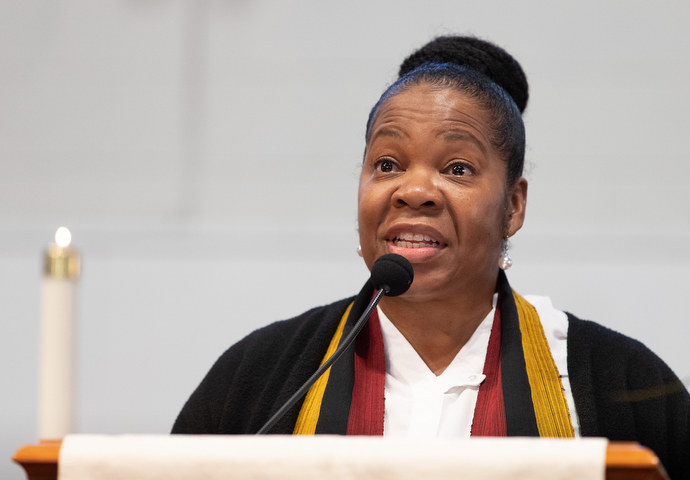 The service was being livestreamed to members who have to keep their distance for now.

The Rev. Hayes, once a promising boxer who felt he could beat his contemporary Sugar Ray Leonard for a shot at the 1976 Olympics team, started preaching at the age of 9 under a street lamp in north Nashville outside his childhood church, Gordon Memorial United Methodist. When medical issues ruined his boxing career, he focused solely on ministry.

“I got my license to preach in ’78, and in my second or third year at Tennessee State University, they gave me a church,” Hayes said.

One of the first Black students admitted to Vanderbilt Divinity School, he switched to United Methodist Gammon Theological Seminary in Atlanta on the advice of an older Black preacher who felt a Black student shouldn’t attend a “white” seminary. 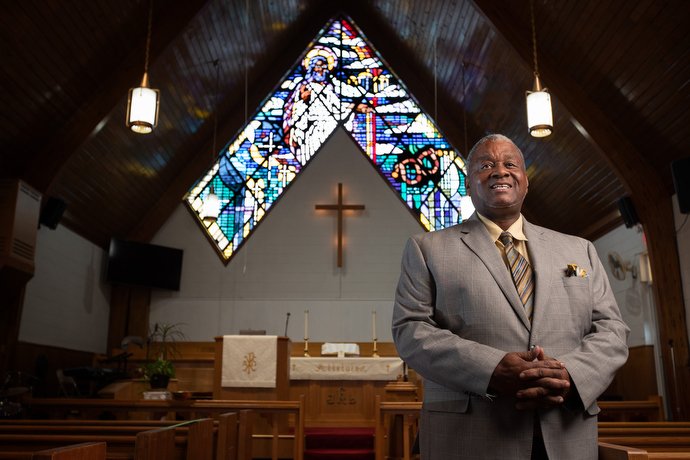 The Rev. Daniel Hayes is senior pastor at John Wesley United Methodist Church in Nashville, Tenn. He is leading the church for a second time, after a decade as its pastor in the 1990s. Photo by Mike DuBose, UM News.

Hayes has overseen renovations or new construction at all the churches he has led through the years, and trained many other clergy who went on to be district superintendents and bishops.

He is proud that all his churches paid their full apportionments — shares of church giving that support conference and denomination-wide ministries —while he was there, including the coronavirus years.

Sometimes Hayes has wondered if racism held him back from getting an appointment as a district superintendent, but also notes that he spent most of his time running his churches rather than seeking to advance his career.

“I haven’t been to a lot of churches because when I go to church, I usually stay there for a while,” Hayes said. “So I haven’t had a lot of appointments.”

Celinda Hughes, Hayes’ assistant, said he has a “soft spot in his heart for seniors and young people.” She is tempted to put a “Do Not Disturb” sign on Hayes’ office, but he won’t allow it.

“He’s very in touch with the members and when they have concerns or issues, he wants them to know that their pastor is available for them,” Hughes said. “I admire that because it requires a lot of energy from him.” 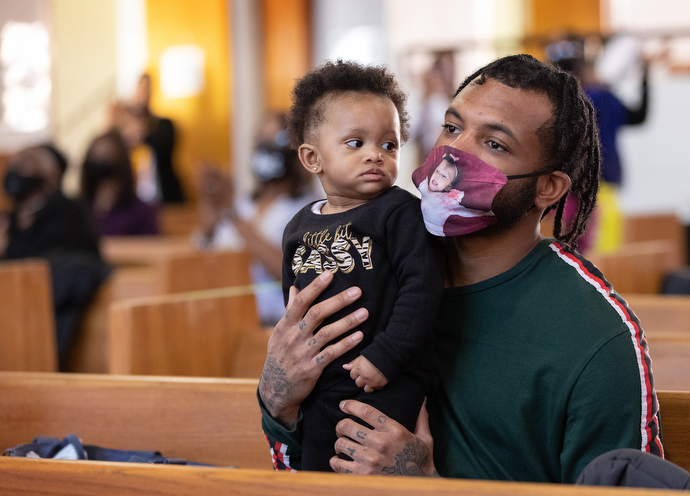 John Wesley United Methodist Church is dedicated to the next generation of Black men and women having every advantage as they go out into the world. The church has the Report Card Roundup club to help youth do well in school, and boys have access to a Young Gentlemen’s Ministry to guide them toward success.

“I’ve always been really hard on boys,” Hayes said. “It’s teaching them to not wear their pants way down here,” he said, gesturing to his knees.

“When you go to party with your other boys, if you want to let your pants down a little bit that day, that’s cool. But you got to pull them up at certain times — when you’re in school, when you’re at church or when you're around parents.”

He’s fine with tattoos except when they’re on the face.

“Don’t put them all over your face because it will keep you from getting a job,” he said. 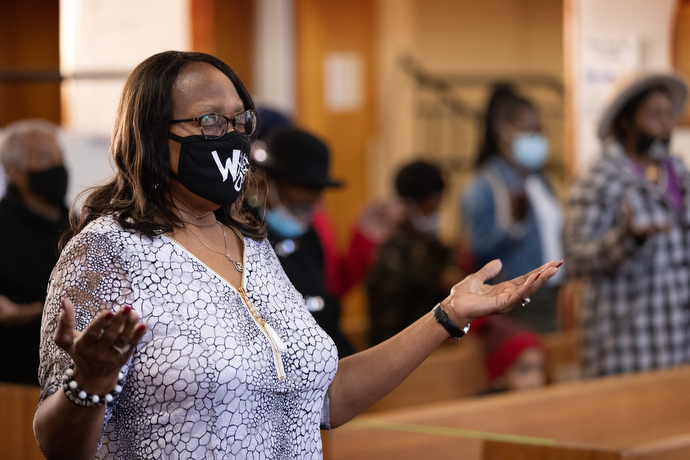 The Report Card Roundup is led by educators who are church members. They usually meet once every six weeks, although COVID-19 has made that difficult.

“A lot of students have trouble in school and a lot of the parents don’t really know how to best support them,” said Lisa Montgomery, a church member who volunteers with the club.

At meetings, the achievements of students are celebrated, and adults are available to talk over problems the students are facing. They’ve helped students deal with bullying, suicides of friends, bad grades and other issues. 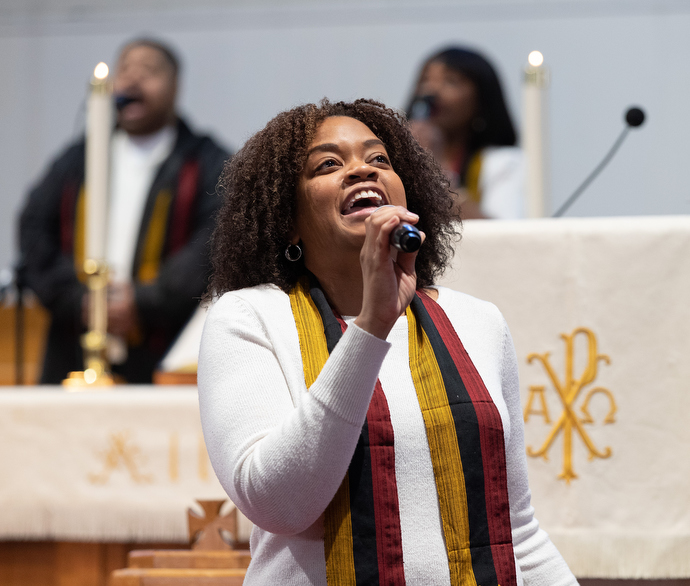 Haynes, the church member with the tambourine, helps with the church’s efforts serving the homeless. She survived an aneurysm in her 20s and is still subject to seizures and severe headaches.

Despite the health problem, she has gone forward with her life, aided by Hayes and her church friends.

“Most people who have aneurysms, they end up dependent on other people,” Haynes said. “But he blessed me for whatever reason. I believe it’s for the work of his kingdom.”

The board of The United Methodist Church’s finance agency has approved a monthly stipend for active bishops who serve more than one episcopal area in this time of disruption.
General Church

After a difficult stretch, The United Methodist Church and Boy Scouts of America are committed to continuing their close relationship but with significant changes.
Theology and Education