United Methodist church leaders were challenged to be intentional about making peace in conflict areas in Africa during a mission visit to Kenya and the Central Africa Republic, where The United Methodist Church has its newest mission stations.

Six members of the Council of Bishops, representing Africa, the Philippines and the United States, along with three staff members of the United Methodist Board of Global Ministries, took part in the Nov. 12-18 visit.

Before embarking on the trip, the church leaders met with leadership of the All Africa Conference of Churches, a fellowship of Christian churches in Africa representing more than 120 million Christians across the continent. It is the largest association of Protestant, Anglican, Orthodox and indigenous churches in Africa and is a member of the worldwide ecumenical network. 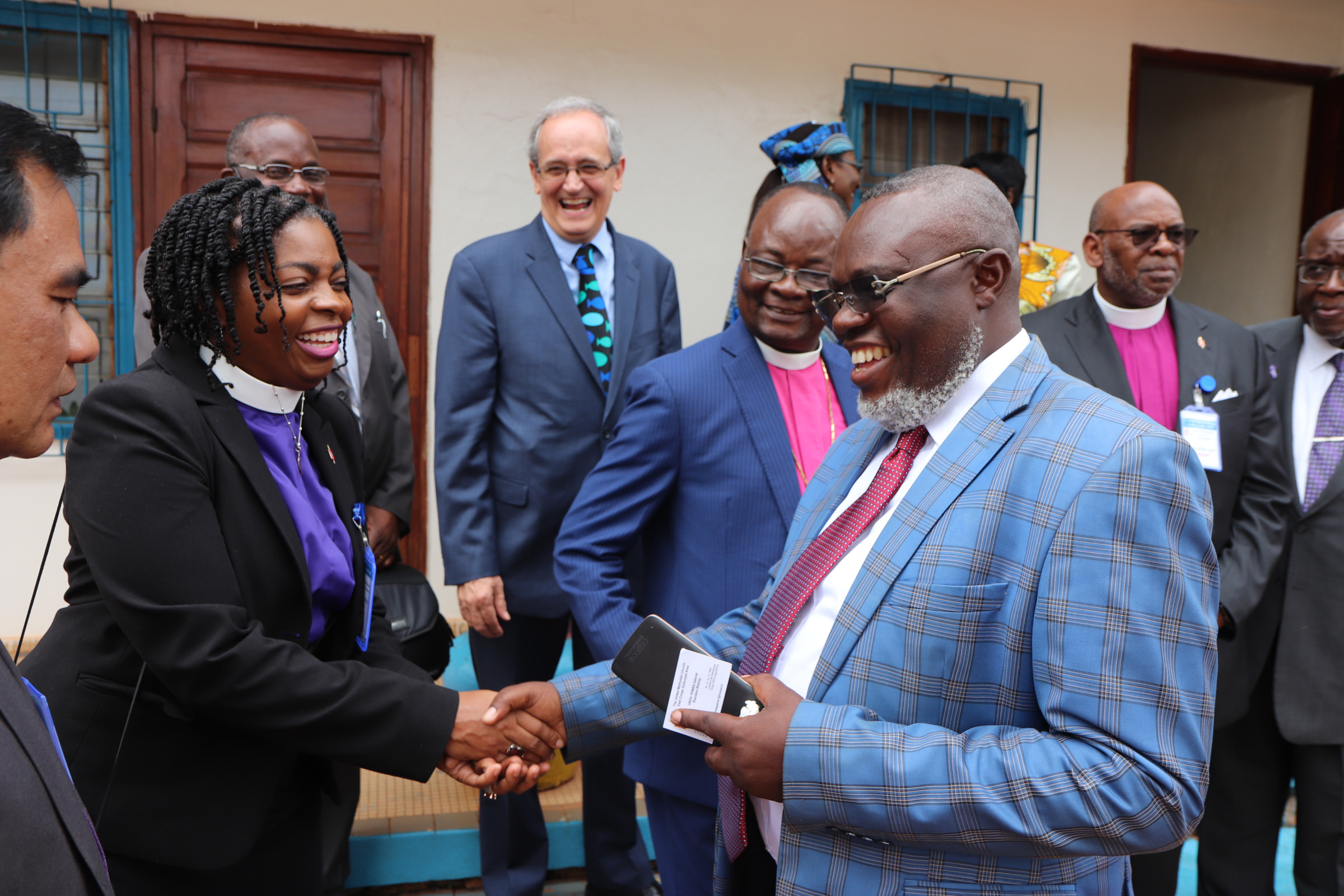 He cautioned the visiting United Methodists leaders about how most of their members were counting on them to help resolve the conflicts in their countries, especially the Democratic Republic of Congo and Central Africa Republic.

“You have a large membership presence in the Democratic Republic of Congo and a prophetic statement from (The United Methodist Church) about ending the conflict will have greater impact,” Mawudor said.

He named ethnicity, political transitions and corruption as the main drivers of conflicts on the continent of Africa. He also pointed out that while religious intolerance and radical extremism are often projected as the cause of most conflicts in Africa, the real reason for persistent conflicts is corruption.

“The leaders in these conflict spots just need people or institutions like the church to engage them in a dialogue,” he stressed.

Mawudor noted that the All Africa Conference of Churches is a movement and as such, it is reaching out to African leaders to tell them the needs of the people.

South Carolina Area Bishop L. Jonathan Holston said the church is interested in strengthening its ecumenical relationship with the All Africa Conference of Churches and other religious institutions that are involved in bringing peace to the world.

“We are interested in bringing total peace to conflict areas where The United Methodist Church has its presence in Africa,” he said.

He also indicated that the Council of Bishops, through its ecumenical commission, needs to collaborate with the All Africa Conference in order to train young United Methodists in ecumenism.

Mississippi Area Bishop James Swanson said The United Methodist Church needs to engage leaders on both sides of the divide.

“The church needs to talk to them, even if we think they are the wrong people,” he stressed.

Swanson pointed out that bringing all parties to the dialogue table is the best way to go about some of the peace initiatives that the church is embarking on.

“It is not enough to just write a prophetic statement about stopping the conflicts without understanding its nature,” he warned.

In Central Africa Republic, the mission team visited Prime Minister Mathieu Simplice Sarandji, who requested that the team continue to pray for his country. 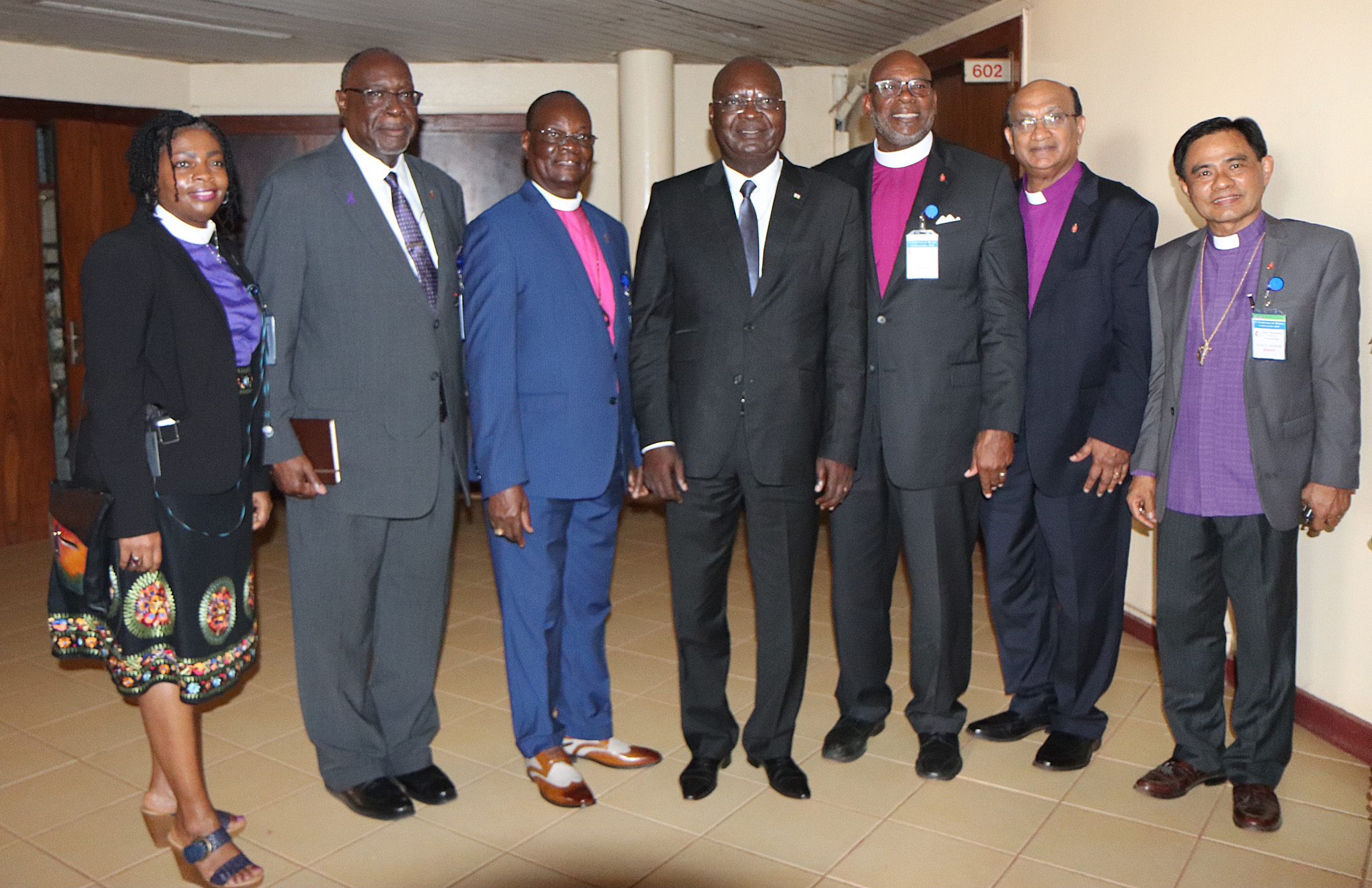 “I would like to assure you that your prayers have had impacts and God is doing great things for this country,” he said.

“I am rejoicing in the fact that God placed in your heart a desire to tread on the central African soil,” he said. “A voice keeps telling me that your feet have blessed this place.”

Speaking on behalf of the mission team, Bishop Gabriel Yemba Unda said he was delighted that the prime minister is committed to keeping the country in the hands of God.

“Though this country is still divided, including the city of Bangui, we were able to go places we could not go in the past,” Unda said, referring to an episcopal visit he undertook to Bangui in 2016.

As the presiding bishop for the United Methodist mission in the Central Africa Republic, Unda indicated that the church never ceased to pray for the country.

“I have faith that when we come back next time, there will be a big change,” he said.

Unda is the resident bishop of the Eastern Congo Episcopal Area, which includes the Eastern Congo, Kivu, and Oriental and Equator annual conferences in the Congo Central Conference of The United Methodist Church.

As part of the mission trip, the team also visited His Excellency Faustin-Archange Touadéra, president of the Central Africa Republic. 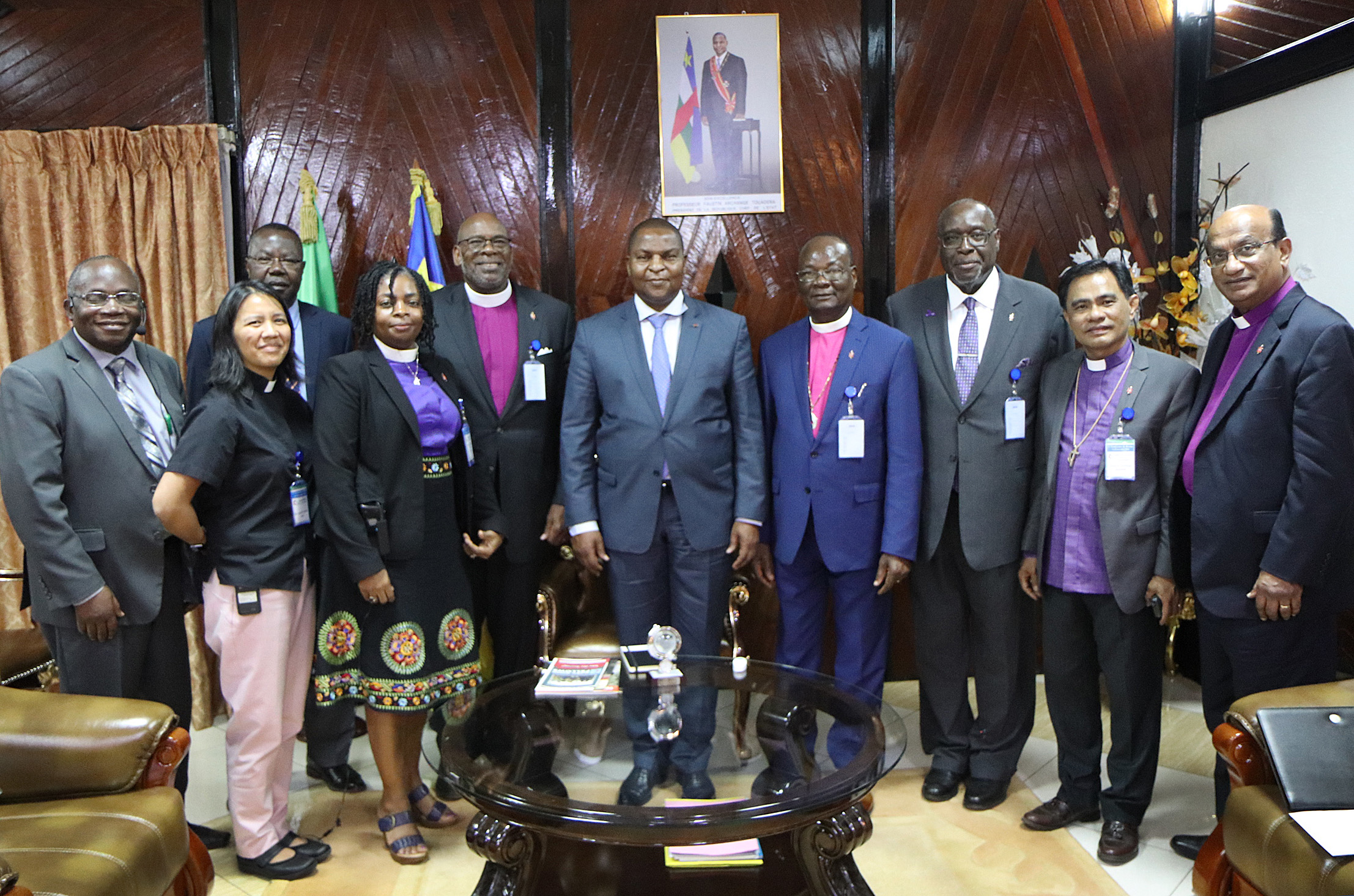 Touadera said he was glad that God has put in the heart of The United Methodist Church the desire to establish a mission in Central Africa Republic.

“As a government, we are doing our best for our people, but there are some things that we cannot fully undertake. That is why support from development organizations such as yours are most welcome,” he said.

The president also indicated that the people of Central Africa Republic need peace and it will take the prayers of the church to ensure that peace comes to the country.

“It is a blessing for me and my country to host a delegation of eminent servants of God,” he told the delegation.

While underscoring the role of the church in ensuring that sustainable peace comes to Central Africa Republic, Touadéra noted that the country is a secular state.

Special prayers were offered by The United Methodist Church delegation to the president’s office and for the entire country.

In response, the Council of Bishops representatives agreed that there was a need for The United Methodist Church to issue a pastoral letter calling on all United Methodists to pray for their brothers and sisters in the Congo.

“We need to declare Dec. 23, 2018, a global day of prayer for the people of the Democratic Republic of Congo,” said Bishop Cynthia Moore-Koikoi of the Western Pennsylvania Conference.

The five-day mission trip was organized by the church’s mission agency. Representatives visited United Methodist churches in Bangui while other members of the delegation led discussions with members of the church in Central Africa Republic.

Swen is a communicator in Liberia. Broune is the French News Director for United Methodist News Service.

Ask The UMC: Pioneer in Methodism, Betsey Down Twombly

Betsey Dow Twombly was a pioneer in education for women and men and a leader in supporting women in mission.
Local Church

While the demise of small, rural churches sometimes seems irreversible as United Methodist faithful grow older, strategies are out there to revitalize these congregations by focusing on what their communities most need.