United Methodist bishops say they worry more about getting the new human sexuality commission right than getting the group appointed fast.

That means the bishops have yet to set a timetable for when they expect to have the commission up and running. They also have not decided how many commission members there will be.

However, they already are talking about the kind of qualities they would like commission members to have.

The Council of Bishops met May 21 for the first time to discuss the commission since it won General Conference approval. Many United Methodists see the commission, part of the bishops’ “Offering for a Way Forward,” as a last-ditch effort to prevent the multinational denomination from splitting.

The bishops’ meeting, already scheduled months before General Conference, was closed to the press shortly before it got under way. 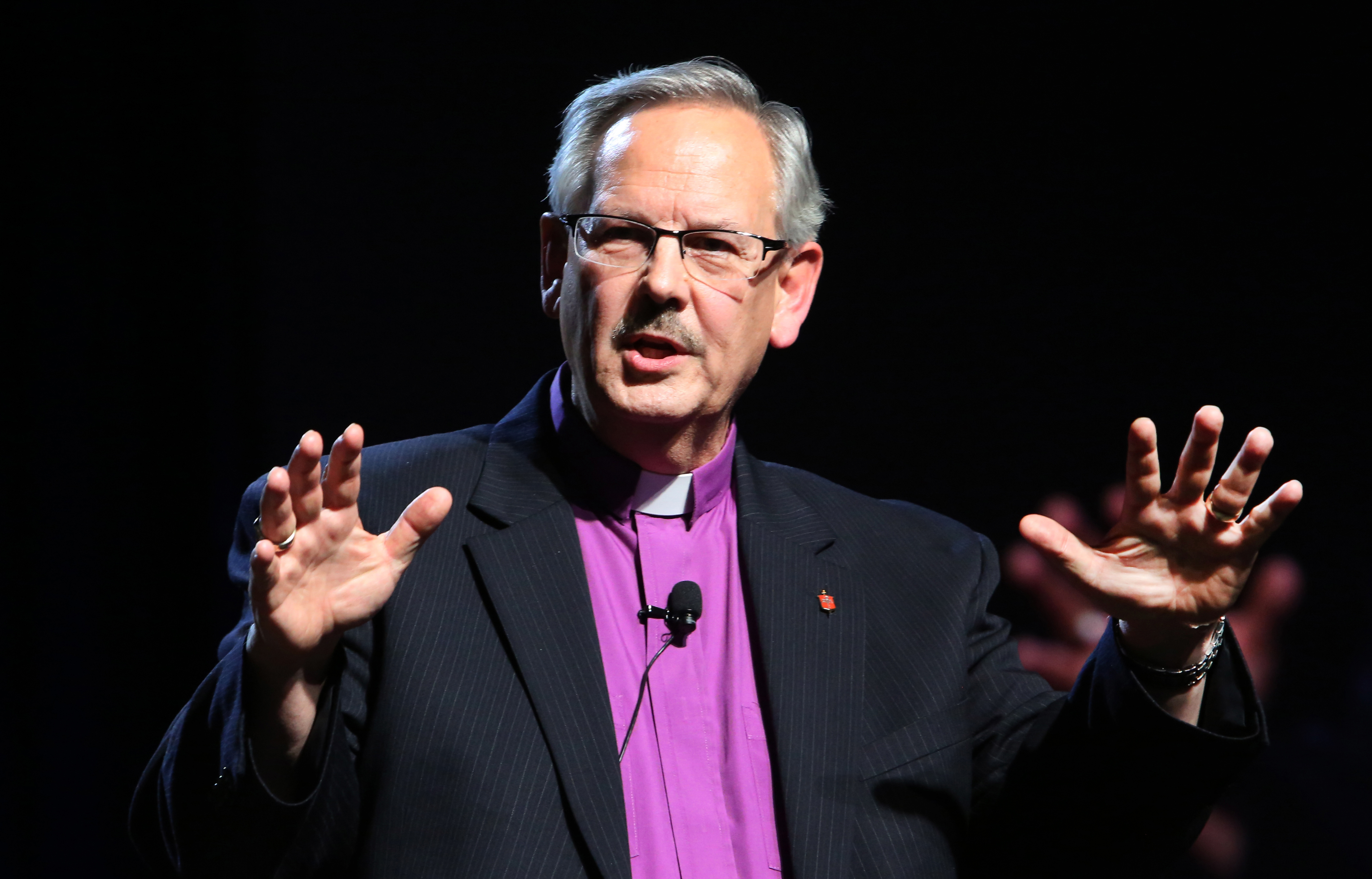 Bishop Bruce R. Ough, president of the Council of Bishops, preaches May 20 at the close of the General Conference in Portland, Ore. Photo by Kathleen Barry, UMNS

“We spent most of our time trying to evaluate the relative merits of doing it quickly or making sure we do it well,” Bishop Bruce Ough, the Council of Bishops president, told United Methodist News Service. He also leads the Dakotas-Minnesota Area.

“The sense was we need to do this very well. And if it takes a little longer than many people would like, it’s better to make sure we have a commission that represents all the voices of the church and will bring the wisdom to the table to find our way through a very difficult situation.”

The commission has the charge of completely examining every paragraph related to human sexuality in the Book of Discipline, the church’s governing document, and possibly recommending revisions.

For now, the Council of Bishops executive committee has the task of devising the process and other details of the commission, Ough said. The group plans to meet before its regularly scheduled meeting in July.

How We Got Here

The Book of Discipline, the denomination’s governing document, since 1972 has proclaimed all people are of sacred worth but “the practice of homosexuality is incompatible with Christian teaching.” As a consequence, The United Methodist Church bans same-sex weddings and bans the ordination of “self-avowed practicing” gay clergy.

But increasingly U.S. United Methodist clergy, including a retired bishop, have publicly defied the wedding ban as more countries, including the United States, have legalized same-sex civil marriage. On the eve of General Conference, more than 100 clergy and clergy candidates in the U.S. and one in the Philippines came out as gay. Advocates for greater inclusion of LGBTQ members in the church indicate they will act as if the church bans do not exist. The initials stand for lesbian, gay, bisexual, transgender, queer or questioning.

Meanwhile, advocates for keeping the church’s current teaching have raised the possibility of “amicable separation” along theological lines unless bishops and others enforce church bans. They have also pushed for letting churches disaffiliate while keeping their property.

At the same time, the denomination is growing in Africa where homosexual acts are criminalized in 38 of 54 African countries. That includes most of the African countries that sent delegates to General Conference. If The United Methodist Church ended its bans, Zimbabwe delegate Betty Katiyo told Religion News Service she fears her country would ban the denomination.

In short, the commission has its work cut out for it.

Hopes for the panel

In the lead-up to the 2016 General Conference, the denomination’s long-simmering debate over how to minister with gay and lesbian individuals seemed to be reaching a boiling point.

Meanwhile, bishops who disagree themselves have been trying to keep this theologically and culturally diverse denomination in the same pot.

At the start of the denomination’s big legislative gathering, bishops met in secret with leaders of various advocacy groups as well as U.S. megachurch pastors in an effort to find a way forward together. But late on May 16, rumors broke out on social media that the bishops were preparing for a possible schism.

Ough publicly squashed those rumors the next day, and at General Conference’s unprecedented request, the bishops worked late into the night on a plan to move forward. The commission is at the heart of that plan.

In forming the commission, Ough said, he and his colleagues are “very, very sensitive to the fact that we will need voices that ultimately bring significant constituencies along.”

He said that means reflecting the voices who have already been part of this discussion. He added that the bishops also want to make sure the commission includes voices from the central conferences — church regions in Africa, Asia and Europe.

He also said the bishops want to include newer, younger voices “who reflect where people are yearning to go in the future.”

During General Conference, a group of youth and young adults presented a statement on unity, which the denomination’s Global Young People’s Convocation and Legislative Assembly adopted in 2014.

Ohio West Area Bishop Gregory Palmer echoed Ough’s call for younger voices on the commission. Palmer, a former Council of Bishops president, will chair the bishops’ Leadership Discernment Team in the coming four years. Starting in July, he will serve on the bishops’ 17-member executive committee.

Palmer said he wants commission members to “be biblically and theologically grounded” and be people with a track record of working through people’s differences.

But even as the bishops move forward on the commission, questions remain about how they will carry out the church’s judicial processes.

At the bishops’ request, General Conference deferred any debate and thus did not alter the denomination’s ban on same-sex unions and “self-avowed practicing” gay clergy.

Bishops' Letter to The Church

General Conference was about far more than what divides United Methodists. In a letter to the church, the bishops celebrated the moments that brought church members together.

In proposing the commission, the bishops said: “We will continue to explore options to help the church live in grace with one another — including ways to avoid further complaints, trials and harm while we uphold the Discipline.”

Bishops' offices are typically the first destinations for complaints under church law.

In the Great Plains Conference, the Rev. Cynthia Meyer faces a complaint after she came out to her congregation as a lesbian who shares her life with another woman.

Great Plains Area Bishop Scott Jones said in a statement to the conference that the complaint process continues but at every stage of that process, the possibility of resolution exists. The conference encompasses Kansas and Nebraska.

Palmer, who was still going through his files after General Conference, said he did not know if Meredith now faces a complaint. He noted that bishops cannot constrain people from making complaints.

“How they are managed is partially a different story,” he said. “I have tried on every complaint no matter the subject to have my first recourse be a just resolution.”

Meanwhile, the Northern Illinois Conference’s Board of Ordained Ministry this month announced that it does not consider sexual orientation and gender identity in the clergy candidacy process. The board made its policy public following similar statements this year from the Baltimore-Washington, New York and Pacific Northwest conferences. The California-Nevada Conference's Board of Ordained Ministry has had a similar policy since 2014.

Bishops do not serve on boards of ordained ministry. Chicago Area Bishop Sally Dyck said the Northern Illinois board “has a long history — long before I got here — of addressing fitness and readiness for effective ministry rather than based on sexual orientation.”

“I believe that they are seeking to add their voice to other boards of ordained ministry across the church where the United Methodist stance on human sexuality is a detriment to our witness to God’s grace and love for all humanity.”