Editor's Note: This story now includes information on a memorial service and donations.

As a fierce advocate for peace and justice, Bishop C. Dale White tackled some of the big issues of recent decades — nuclear disarmament, environmental concerns and Middle East peace.

But those strong convictions were balanced by a gentle and focused demeanor, United Methodist friends and colleagues say.

Jaydee Hanson, a longtime friend and former staff member of the United Methodist Board of Church and Society, called it a “gentle fearlessness” that many people found engaging. “Dale had an abundance of vision but offered it in a way that people could adopt it,” he told United Methodist News Service.

White, 94, died March 29 after entering hospice care at Newbury Court in Concord, Massachusetts, where he had been living for several years. 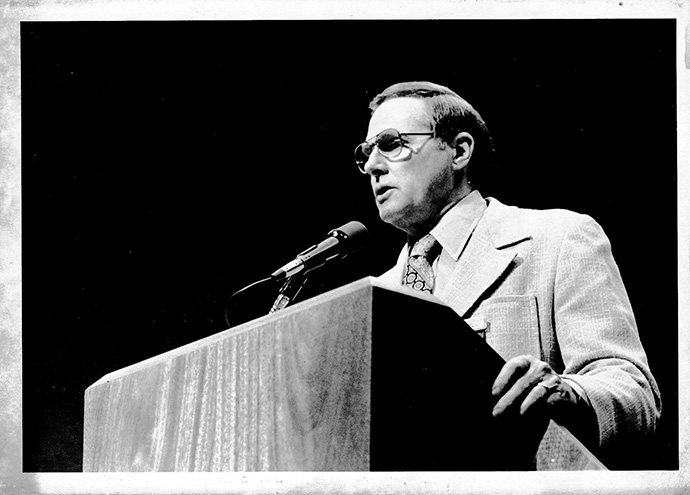 Beth Capen, a layperson who now serves on the United Methodist Judicial Council, was a young adult when White was the New York bishop. She grew to appreciate his accessibility and his skills in helping people reach solutions. “He modeled the fact that our work and our mission is not about us, it is about those who we are serving in the name of God,” she said.

One of White’s major contributions, said retired Bishop William Boyd Grove, a Northeastern Jurisdiction colleague and friend, was the 1986 public statement of the United Methodist Council of Bishops called "In Defense of Creation: The Nuclear Crisis and a Just Peace."

More than any other bishop, he added, White was responsible for that pastoral letter and study guide. “It was Dale’s idea and he chaired the task force, and it was really his baby.”

On a personal level, White’s foundation was his 70-year marriage to Gwendolyn Ruth Horton, a longtime retreat and spiritual director, who died in 2017. They shared common values, along with a love for their children and a love for the church.

“It’s hard for me to remember either Dale or Gwen White without the other,” Grove said. “The two of them were a pair. Both embraced a simple lifestyle. Neither of them were pretentious in any way.”

Born on Jan. 20, 1925, White grew up in rural Iowa. He earned a bachelor’s degree at Methodist-related Morningside College in Sioux City, a school that has helped develop many church leaders. Enrollment in Boston University School of Theology — where he earned two degrees — landed him permanently on the East Coast.

Ordained a deacon and an elder in the Southern New England Conference, White was a staff executive at the Methodist Board of Christian Social Concerns (now Church and Society) from 1961-68.

His interest in interfaith relations, international affairs and the lives of people everywhere landed White in some unusual places. In the early months of the Iran hostage crisis, for example, he was part of a seven-member U.S. delegation that traveled to Iran in hopes of helping the situation by “reaffirming and restoring friendship between the American and Iranian peoples.”

Grove said White was instrumental in establishing the Mission for Peace with Young People in the Northeastern Jurisdiction, which sponsors an annual trip to allow students to see and do mission. “That’s had an enormous impact on a lot of young people who are now leaders of the church,” he added.

Outside the denomination, his leadership on the “In Defense of Creation” document led to the biggest “of any public statement that The United Methodist church had made in the last 40 years,” Grove said.

After the veteran Associated Press religion reporter George Cornell saw the first draft of the letter in November 1985, he called the unconditional position of the United Methodist bishops even stronger than that taken by U.S. Catholic bishops.

White stressed that point after the letter was adopted the following spring. ''We are challenging the policies of the government of this nation, and we are doing so in the name of Christian justice,'' he said during a press conference, as quoted by The New York Times.

Jan Love was a professor of international relations when “In Defense of Creation” was released in book form and used it in her classroom. But she thought the statement did not take into account a growing number of critiques from women scholars on the war system “as a male construct that threatened all of creation” and brought that up in a speech to the Board of Church and Society.

White, whom she had never met, “immediately sought me out for greater conversation,” she recalled, and they ended up cooperating on various consultations about peace and justice.

“He never stopped learning, he never stopped growing or allowing critical perspectives to enhance his understandings of how the world worked,” said Love, now the dean of Candler School of Theology.

Hanson, one of the persons providing research for “In Defense of Creation,” remembers White as a bishop “who had both strong intellect and strong activist instincts.”

Part of the work surrounding the pastoral letter was engaging in “fairly serious” ethical discussions with the people in charge of developing nuclear weapon systems. The United Methodist statement, Hanson noted, “gave the political folks one more reason to want to reduce how many weapons everybody had.”

White’s episcopal address to the 1992 General Conference, just before his retirement as an active bishop, was a further highlight of his ministry. Hanson called the speech a good summation of both his leadership and vision, expounding upon the evils of poverty, pollution and the proliferation of weapons.

Those themes in White’s 1992 episcopal address were picked up later as “parallel structures,” Hanson said, in “God’s Renewed Creation: Call to Hope and Action,” a 2009 pastoral letter by the Council of Bishops.

A memorial service is scheduled for 11 a.m. June 1 at the Sudbury United Methodist Church in Sudbury, Massachusetts.

Condolences can be sent to the family in care of his daughter, Teresa Kuczynski, at P.O. Box 153, Salisbury, VT 05769.

In lieu of flowers, the family asked that donations be given in the bishop’s memory to any of the following organizations:

It’s a hard process for many to decide whether to stay or leave The United Methodist Church, and even harder not to hurt others while doing it. Pastors and church leaders reflect on how they are trying to be faithful while working toward a difficult decision.
Mission and Ministry