United Methodists in Southwest Texas faced the question of whether a lesbian's clergy candidacy process had been mishandled.

The decision stems from Mary Ann Kaiser's removal from the ordination process on the recommendation of her conference's board of ordained ministry. Kaiser is the youth director and justice associate at University United Methodist Church in Austin and had been pursuing ordination as a United Methodist deacon.

Dorff ruled the question "as presented, moot and hypothetical. Therefore, the request is improper and no decision on the substance of the request will be given."

His ruling - like all bishops' rulings on questions of law - automatically goes for review to the United Methodist Judicial Council, the denomination's top court. The church court next meets in October.

Kaiser is no longer listed as a candidate to become a clergy member.

Kaiser released a statement through Reconciling Ministries Network expressing her disappointment that the bishop "has chosen to argue a technicality."

Reconciling Ministries Network, an unofficial caucus that advocates for the denomination's greater inclusion of gay, lesbian, bisexual and transgender individuals, had organized a protest on Twitter to Kaiser's removal. Kaiser occasionally blogs for the group.

"Bishop Dorff has clearly renounced his responsibility to 'guard the Discipline of the Church (par. 403.1)' by refusing to hold an official body of the annual conference accountable to carry out clear mandates of the Discipline," Kaiser's statement said. "There is nothing 'moot' or 'hypothetical' about my case at all. ... The bishop has chosen to ignore this neglect of responsibility and disregard for a relational process by simply washing his hands of the matter."

Dorff's ruling and pastoral letter said he was "asked to rule on a specific, procedural question regarding the actions of the Board of Ordained Ministry. My response is specific and procedural."

"I am also aware that this decision will disappoint some, confuse some, and seem accurate to some," his statement later added. "I so wish I could have made a decision which would please everyone."

The Rev. Suzanne Isaacs, the chair of the conference's board of ordained ministry and now retired, said she feels "comfortable with the bishop's ruling."

Elford, like Kaiser, told United Methodist News Service he is disappointed in the ruling. He said hoped Kaiser would have an interview before the board like other candidates.

"My sense is that the bishop felt that his ruling is in line with the way the Judicial Council will rule in the fall, but no one can know for certain what they will do," he said. "To rule that it was not germane to conference is so strange. We spend a huge amount of time at annual conference meeting candidates and receiving them and commissioning and ordaining them. It seems that Mary Ann's candidacy is very much a part of the work of our annual conference.

"Beyond the whole issue of the bishop's ruling, the discriminatory laws toward LGBTQ (lesbian, gay, bisexual, transgender and questioning) folk is a systemic issue for our church," he added. "This is not how the church ought to treat one of its own. It's way past time for change. We not only lose our moral authority when we refuse to stand in the breach with those who are marginalized, but we stand to lose our sense of who we are as the inclusive, beloved community of those who follow Christ."

Church law and questions of procedure 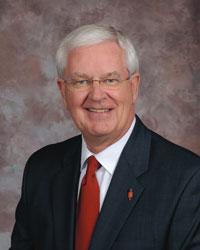 The Book of Discipline, the denomination's law book, says all people are of sacred worth but states that "the practice of homosexuality is incompatible with Christian teaching."

The book bans "self-avowed practicing homosexuals" from "being certified as candidates, ordained as ministers, or appointed to serve in The United Methodist Church."

The question before the bishop centered on another part of church law, which deals with the procedures for reviewing clergy candidates.

Dorff said his ruling that the question was moot and hypothetical was based on theRules of Procedure of the Judicial Council. Those rules required that questions of law "be germane to the regular business, consideration, or discussion of the conference session and shall state the connection to a specific action taken, or the question must be raised during the deliberation of a specific issue of a matter upon which the conference takes action."

The question before him, the bishop said, failed to meet those standards since they related only to the work of the board of ordained ministry.

"I have come to believe that some persons expected my ruling on this request to somehow change the requirements for ordination in The United Methodist Church," his statement said. "I do not have such authority."

Dorff noted that only General Conference, the denomination's top lawmaking body, can make such changes. The assembly next meets in 2016.

Kaiser, now 27, was certified in 2008 as a candidate for deacon by the Pensacola District Committee on Ordained Ministry in the Alabama-West Florida Annual (regional) Conference. At the time, she told United Methodist News Service, "I was not even out to myself yet."

Since then, she has moved to the Southwest Texas Conference, completed a Master of Divinity at United Methodist-approved Austin Presbyterian Theological Seminary and started working with the Austin District Committee on Ordained Ministry.

The district committee voted 6-2 to recommend to the board of ordained ministry that she continue in the ordination process. However, during the closed clergy session June 6, the board of ordained ministry recommended her certification be revoked. Elford, senior pastor at the church where Kaiser works, made a motion that she be reinstated. Clergyvoted against his motion 119 to 124, essentially accepting the board's recommendation.

Kaiser's first interview with the board of ordained ministry was scheduled for January 2014. She had expected to be commissioned as a deacon next year at the earliest.

The Rev. Thomas Lambrecht, who has argued multiple cases before the Judicial Council, said he is surprised by Dorff's ruling.

Lambrecht is the vice president and general manager of Good News, an unofficial evangelical United Methodist caucus that advocates maintaining the Book of Discipline's stance on human sexuality.

He expects the Judicial Council to send the case back to Dorff for a ruling, which he said would likely put off consideration of the issue until the church court's spring 2014 meeting.

However, Lambrecht says, he thinks the board of ordained ministry's actions are defensible.

He praised the Southwest Texas Conference clergy session's support for the board's recommendation as "courageous and firm action." He said the session "reaffirmed the covenant under which we operate as United Methodists."

He also praised the bishop for affirming that only General Conference can set the qualifications for ordained ministry.

Lambrecht and the Methodist Renewal Movement, an evangelical caucus with membership largely in Texas, also praised Dorff's pastoral letter for calling all involved to mutual accountability.

"We hold each other mutually accountable through the processes outlined in the Book of Discipline," the bishop said. "As your bishop, I will seek to perform my responsibility to uphold the Book of Disciplineto the best of my ability as God gives me guidance. I trust that all others in positions of leadership will do the same."