Bishop Felton E. May often spoke of the need for “holy boldness” — and his admirers said he lived the phrase.

He was a forceful preacher and a force away from the pulpit.

“You did not have to ask him to enter the fray,” said James H. Salley, associate vice chancellor for Institutional Advancement for Africa University, a United Methodist School. “If he saw it and felt it was wrong, he opposed it. If he felt it was right and something he needed to support, he did it.”

May died Feb. 27 at age 81, at his home in Ellicott City, Maryland. He had been under hospice care for pancreatic cancer. Survivors include Phyllis Henry May, his wife of 53 years. 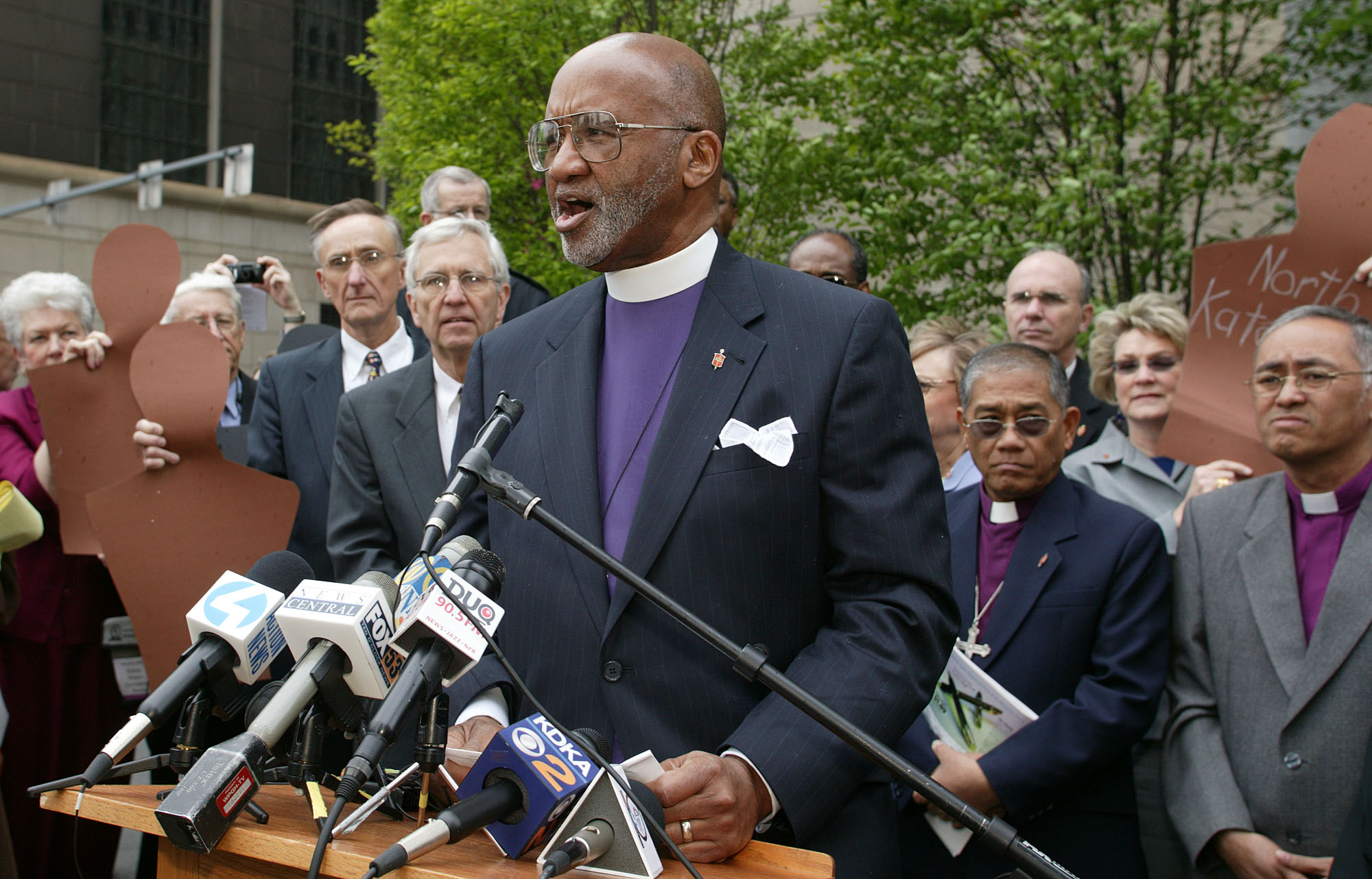 United Methodist Bishop Felton May condemns the U.S. government's denial of visas for some United Methodists from Africa and the Philippines to attend the church’s 2004 General Conference in Pittsburgh. May died Feb. 27 at age 81. File photo by Mike DuBose, UMNS.

Bishop LaTrelle Easterling of the Baltimore-Washington Conference announced May’s passing and called him “a giant of The United Methodist Church.”

“I urge us all to actively keep his family and all those who loved him in our prayers,” she said.

During five decades of ministry, May led United Methodist churches, conferences and agencies. He was the first African-American bishop of the Baltimore-Washington Conference. He helped start both Africa University and the denomination’s Communities of Shalom movement.

May made church-related visits to the White House, but also accepted a first-ever “set-aside” episcopal assignment to the streets of Washington, during a spike in drug-related violence.

Through his ministry, he acted on a deep concern for those on the margins.

“What I saw was a person who showed bold leadership, a person who was visionary and a person who didn’t mind taking risks on behalf of those who tended to be left outside,” said Bishop Marcus Matthews, who was a district superintendent under May. Matthews retired as bishop of the Baltimore-Washington Conference in 2016.

May was born in Chicago in 1935. He grew up in an apartment on the South Side and regularly attending a Baptist church with his mother and siblings.

While a student at local Judson College, May worked part-time at a reform synagogue. Rabbi Louis Leopold Mann recommended that he become a part of St. James Methodist Church, which had a commitment to integration.

Condolences can be sent to the May family at 3315 Oak West Drive, Apt. 123, Ellicott City, MD 21043. Emails can be directed to Daphne May Brown at [email protected]

“I think God has called you to be a minister,” May, speaking in 2009 at Wesley Theological Seminary, recalled the rabbi saying.

May also remembered being incredulous at the rabbi’s assertion, but was soon involved in leading Sunday school and youth programs at St. James.

“And then I began to read Methodist literature and its social witness, and it made sense to me. I felt I was called by God to do that,” he told the Baltimore Sun for a 2001 profile.

May was active as a young adult in civil rights work, including Operation Breadbasket. He was ordained as a deacon in the Northern Illinois Conference in1962 and served two pastoral appointments in Chicago, one of them a church start.

To get Maple Park Methodist going, May and his wife knocked on doors, started a children's ministry and held worship services. The church was chartered with fifteen families and grew to 300 in weekly attendandce during May's time. It also was active in civil rights and other social justice advocacy.

In 1968, May transferred to the Peninsula Conference and became associate executive director of the Methodist Action Program in Wilmington, Delaware. After earning his master of divinity degree from Crozer Theological Seminary, he was ordained a United Methodist elder in 1970.

May would again serve as a church pastor, then as a district superintendent and as director of the Conference Council of Ministries.

In 1984, he was elected bishop and assigned to the Harrisburg Episcopal Area.

The Rev. Dean Snyder, now retired, worked on May’s staff in Harrisburg, Pennsylvania. Snyder said some top church leaders buckle under the responsibility, and complain about all the decisions they’re supposed to make.

“Felton never felt sorry for himself, and he never apologized for exercising his responsibility and authority,” Snyder said. 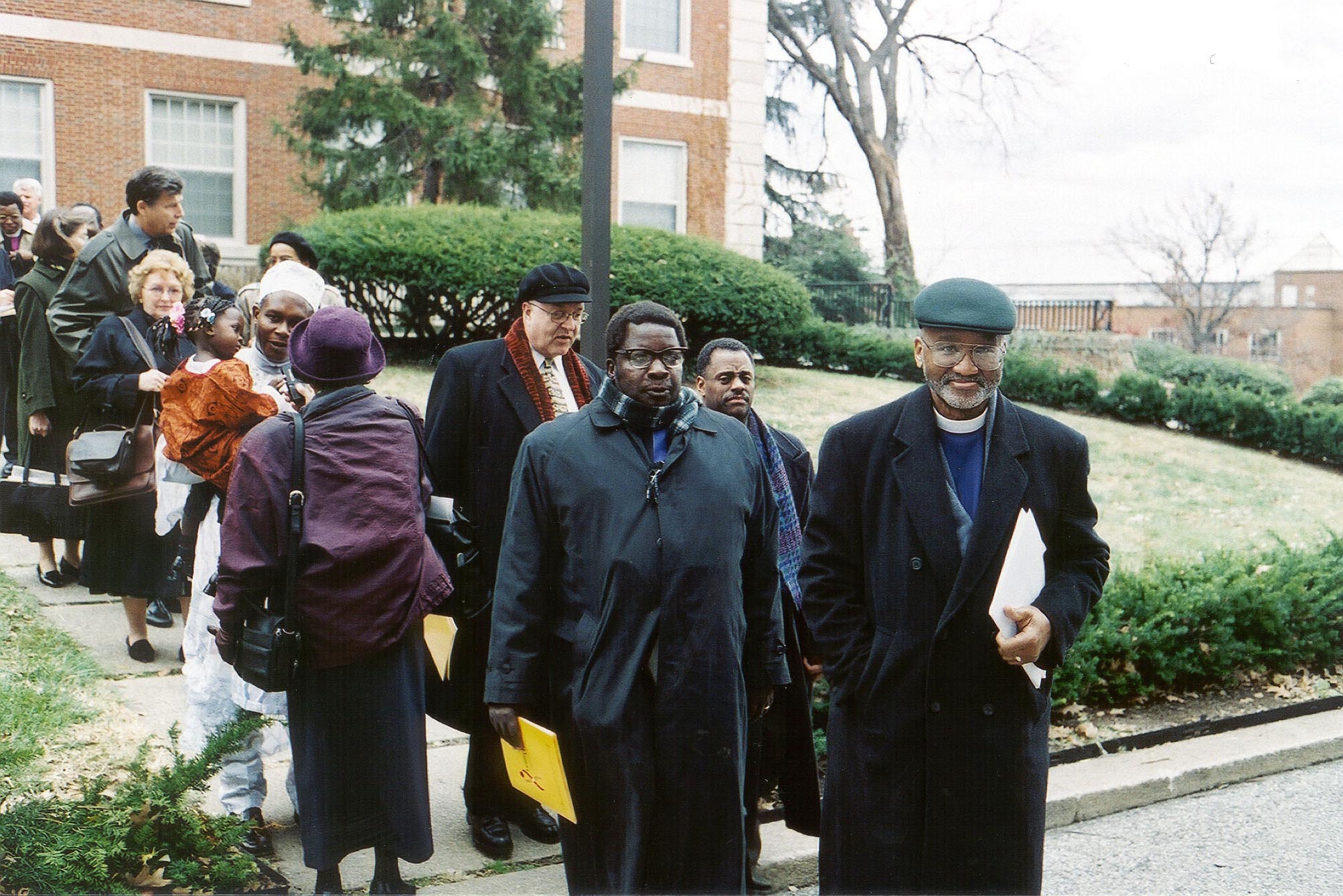 United Methodist Bishop Felton May (right) walks with Bishop Christopher Jokomo of Zimbabwe (center) following a meeting of global religious leaders to discuss AIDS policy in Washington in 2000. May died Feb. 27 at his home in Ellicott City, Maryland. File photo by Dean Snyder.

Snyder added that May could be intimidating, but also strongly backed those under him who took a risk in social justice ministry.

“He’d say, ʽI’ll be with you all the way,’ and that was true,” Snyder said. “If people took a prophetic stance, no matter what, Felton was with them.”

May made a vivid impression on many of those he led in the Harrisburg Area, including Iris Green. She recalled that May asked people to put a candle in one of their windows as a symbol of peace.

"I've had a candle in my kitchen window ever since," Green shared by email Feb. 27.

May, as a bishop and as president of the General Council on Ministries, was one of those successfully pushing for the 1988 General Conference to establish Africa University. He would later serve as vice president of its board of directors.

“He was there from the beginning, and there are a number of students who have graduated because of his personal intervention in providing funding,” Salley said.

May also had a key role in forming Communities of Shalom, which the 1992 General Conference started in response to race riots in Los Angeles. Later he successfully pushed for expanding the program into Africa.

“He was the organizing bishop and brought it out internationally,” said the Rev. Michael Christensen, director of the Shalom Initiative for Prophetic Leadership and Community Development at Drew University.

Perhaps May’s highest-profile role came in 1990-91, when he served on special assignment, leading the United Methodist Bishops’ Initiative on Drug and Alcohol Abuse and Violence in Washington. No other bishop has been asked by the Council of Bishops to leave an episcopal area for a special assignment on its behalf, and then return to active service.

In Washington, May and his wife took an apartment in The United Methodist Building, but he spent much of his time working with pastors in the toughest neighborhoods.

“He would be on the street, meeting people where they were,” said Stephen Drachler, who worked with May on the Washington assignment.

Drachler recalled that May heard another pastor refer to churches as “saving stations,” and seized on that term. May and clergy colleagues borrowed tents and erected them on the street, where they held revival-style worship services but also invited drug counselors in to help people battling addictions.

The saving stations concept brought coverage from The New York Times and other news organizations.

“We must mount a holy war against drugs and reclaim our streets,'' May told The Times. 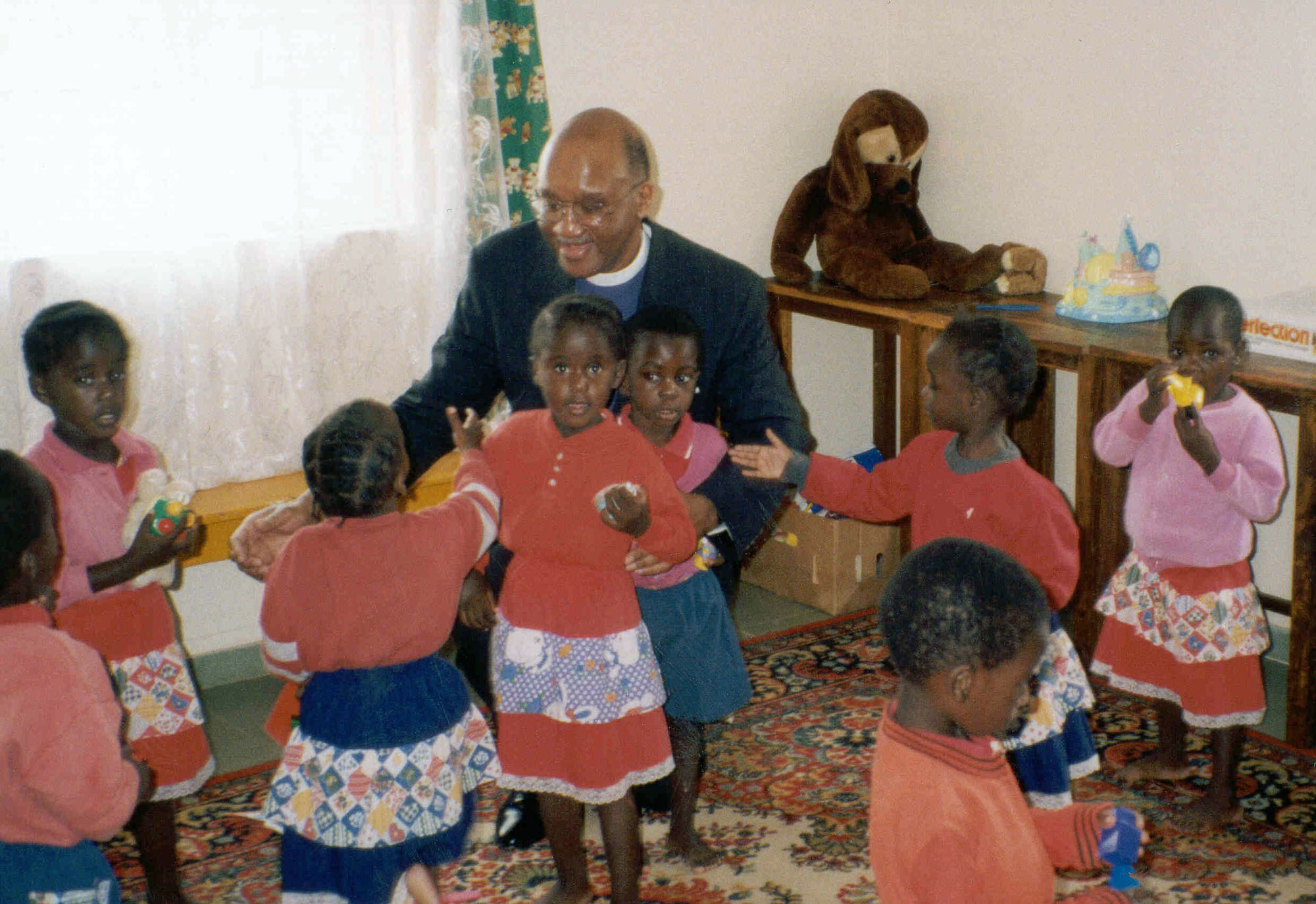 United Methodist Bishop Felton May plays with children at a Zambian orphanage in 1999 during a trip in support of a Presidential Mission on Children and AIDS.  The trip "brought me to my knees during Holy Week," said May. May died Feb. 27 at age 81. File photo courtesy of Bishop Felton May.

May would reprise the strategy in Baltimore during his final episcopal assignment, leading the Baltimore-Washington Conference. The saving stations idea would be adopted elsewhere and would help lead to the United Methodist Board of Global Ministries' Special Program on Substance Abuse and Relaated Violence.

All along as bishop, May showed a deep interest in combatting poverty and other social ills in the United States and worldwide.

In 1994, he visited Rwandan refugee camps as part of a United Methodist fact-finding team. He returned two years later to help dedicate a tent village for orphans provided by United Methodists, a change he called a “miracle” compared to lethal conditions he’d seen earlier.

May also served on a White House Presidential Commission on AIDS, travelling across southern African in 1999. The trip helped increase U.S. spending on AIDS worldwide by $100 million.

Under May, the Baltimore-Washington Conference formed a partnership with the Zimbabwe Conference.

“He gave birth to that,” Matthews said, who also would lead the Baltimore-Washington Conference. “I’m proud to say it’s still going.”

In 2004, May retired from the episcopacy, but his work pace hardly let up. He served as dean of the Harry R. Kendall Science and Health Mission Center at United Methodist-affiliated Philander Smith College in Little Rock, Arkansas.

From 2007-2008, May served as interim top executive of the Board of Global Ministries. During his tenure at the agency, May and three other general secretaries presented four new areas of focus to the denomination at the 2008 General Conference in Fort Worth, Texas. The Four Areas of Focus were celebrated by the delegates and have guided much of the church’s work since then.

“He was more than willing to come,” said New England Conference Bishop Sudarshana Devadhar, who as Greater New Jersey Conference leader asked May to take on the Trenton church. “He was always a pastor, always a prophet and always a great colleague.”

“One cannot speak about his ministry without mentioning Phyllis, who was his loyal supporter and true partner,” he said.

May’s indefatigable efforts in social outreach were guided by an unapologetic evangelical fervor.

“Programs have had their day,” he said in his 2009 address at Wesley Theological Seminary. “The power of Christ must rest upon us and our institutions.”

May is survived by his wife; two children, Daphne May Brown and Felton May II, and 10 grandchildren.

A memorial service will begin at 11 a.m. on April 1, a Saturday, at Asbury United Methodist Church, 926 11th Street, NW, in Washington.