Retired United Methodist Bishop James K. Mathews, who had a lifelong passion for mission work and evangelism, died Sept. 8 in Washington, D.C. He was 97.

The son-in-law of noted evangelist E. Stanley Jones, Mathews traveled the world as a Methodist missionary. He made more than 60 trips to India, 28 to Africa, 16 to Latin America and a dozen to Korea and Japan during his lifetime.

Throughout his travels, he brought a commitment to Christian service, said his daughter Anne Mathews-Younes.

"He loved life, he loved to serve and he was always willing to share of himself,"she said. "He worked all the time because that's what you do when you're a Christian. There's always something to do."

John "Jack" L. Ewing Jr., the executive director of the Foundation for Evangelism, called Mathews one of "the giants of the faith."

However, the office of bishop was not a distinction he sought.

Mathews declined the post when he was first elected to serve as bishop in India in 1956. He suggested that Indians should be ministered to by their own people.

In 1960, he was on a mission trip in India when he was elected to the episcopacy again. This time, he accepted. He served as bishop of the New England Area for 12 years and then the Washington (D.C.) Area for eight before retiring in 1980.

In 1985, Mathews came out of retirement to serve as bishop in Zimbabwe for a year, and during his tenure, he helped establish Africa University. He was called into service again in 1990, leading the newly created Albany Area in upstate New York until 1992. He later served as bishop of the New York Area starting in 1995, when its bishop went on medical leave.

Mathews retired again in 1996 as one of the longest-serving bishops of The United Methodist Church.

In many ways, Mathews embodied what was best about Wesleyan thinking, friends say. 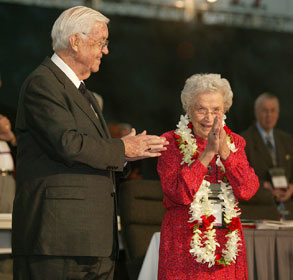 Bishop James K. Mathews applauds his wife on the occasion of her 90th birthday during the 2004 General Conference in Pittsburgh.
A UMNS file photo by Mike DuBose.

The late bishop also had a very Wesleyan understanding of evangelism that combined personal holiness with social holiness, said both McAllister-Wilson and Ewing.

"Mathews clearly understood it is not just about our personal relationship with God, our personal holiness," Ewing said. "It is about our responsibility for our fellow human beings through social holiness."

He was equally passionate about giving an altar call and calling for civil rights, McAllister-Wilson said.

On Easter Sunday in 1964, he and African-American Bishop Charles Golden were barred from entering an all-white Methodist church in Jackson, Miss.

Decades later, Mathews-Younes said, her father was invited to preach at the church. The church is integrated now.

"My dad was on the right side of the issues," his daughter said. "He wasn't a rabble rouser at all. He was just patiently on the side of justice and Jesus."

From medicine to mission

One of eight children, Mathews was born Feb. 10, 1913, in Breezewood, Pa. His father was an itinerant Methodist preacher, but Mathews initially aspired to become a physician and was a pre-med student at Lincoln Memorial University in Harrogate, Tenn.

While in college, he had a "profound conversion experience," his daughter said, and his now-deceased brother, the Rev. Joseph W. Mathews, convinced him to enter the clergy.

He used to joke that he "saved a lot of lives by not becoming a surgeon," Mathews-Younes said.

He was ordained a Methodist minister in 1937. He then earned a master's degree in theology from Boston University School of Theology where a lecture by an Anglican bishop from India inspired him to become a missionary.

"His mission was the message of God's love in Jesus Christ, proclaimed in acts and words."
- Thomas Kemper

In 1938, he set sail for India. The following year at the Sat Tal Christian Ashram in northern India, he met E. Stanley Jones and, just as importantly, Jones's daughter Eunice. The two married in June 1940.

After serving in the U.S. Army during World War II, Mathews returned with his wife to the United States where he pursued his Ph.D. in theology at Columbia University under the G.I. Bill. He also took a post with the Methodist Board of Missions, the predecessor of the United Methodist Board of Global Ministries.

As a missionary, he crossed the Atlantic Ocean some 220 times and mastered several languages, including the Indian languages of Marathi, Hindustani, Urdu and Sanskrit.

He was "one of Methodism's mission stalwarts of the 20th century," said Thomas Kemper, the top executive at the Board of Global Ministries.

"His mission was the message of God's love in Jesus Christ, proclaimed in acts and words," Kemper said. "He wrote, preached, taught and traveled for the gospel."

As part of his ministry, he also met a number of powerful people. He was lifelong friends with Mahatma Gandhi's grandsons. He met with Jackie Robinson, the black player who integrated Major League Baseball. Supreme Court Justice Harry Blackmun spoke when he retired as the Washington Area's bishop in 1980.

He was invited to the White House to discuss civil rights with President Kennedy. During the administration of President George H.W. Bush, he helped establish an interdenominational chapel at Camp David. He flew on Air Force One with President Clinton on the way to help lead a ceremony at Pearl Harbor to commemorate the end of World War II.

But he touched the lives of far more than celebrities and presidents.

Mathews-Younes said that when her father made what would be his last visit to the hospital, the nurse who cared for him recognized him from seeing him preach 25 years ago in her native South Africa.

"She changed all of her shifts so she could be his nurse," Mathews-Younes said. "I never saw such gentle caring. It was a blessing. We knew God was there, and God was putting people around him."

His survivors include his wife of 70 years, Eunice; his daughters, Mathews-Younes and Janice Stromsem; and son, J. Stanley Mathews, as well as six grandchildren and soon to be three great-grandchildren.

A memorial service is scheduled at 11 a.m., September 25th, at Metropolitan Memorial United Methodist Church, 3401 Nebraska Ave., N.W., Washington, D.C. A luncheon will follow the service. In lieu of flowers, gifts can be made on behalf ofmissionary work in India through the E. Stanley and Mabel Jones Foundation at the General Board of Global Ministries, 475 Riverside Drive, New York, NY 10115.

Commentary: An encounter with truth on MLK Day

"A Global Odyssey: The Autobiography of James K. Mathews"

United Methodist Board of Global Ministries